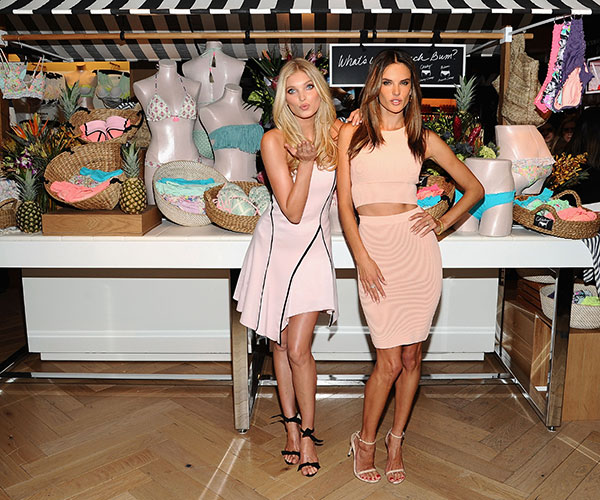 The Victoria’s Secret Angels have revealed that they put in some major physical work prepping for their annual fashion show, and it doesn’t end once they’re backstage getting their hair beach-ready and their skin touched with that brand signature illuminating makeup. Those wings on their backs are actually REALLY heavy and the bras for the show apparently don’t feel like fluffy clouds either. These are just some of the things we’ve come to know about this annual event, besides the fact that these girls can work the catwalk.

But now the models are spilling on what it takes to complete yet another portion of their contract—the Victoria’s Secret Swim catalog and campaign—with a nationally broadcasted show. It’s not a runway show like you might think, but almost like a documentary of sorts. We caught up with Alessandra Ambrosio and Elsa Hosk, who gave us some details on what to expect, their favorite fitness and health tips, and more while they were in New York City promoting the brand’s swim collection.

The swim show isn’t the only new thing the brand has going on, either. They just released their new limited edition fragrance, Very Sexy Now, a scent that compiles notes of coconut water, tuberose, and cucumber flower.

“We shot in Puerto Rico, and it’s really the first time we had cameras following us doing everything to get the perfect shot and people can see what it takes to get a perfect shot,” Alessandra Ambrosio told Beauty High of the show.

MORE: The Best Moments From the Victoria’s Secret Fashion Show

“Sometimes we get girls conquering their fears—jumping from a high cliff to get that shot. I had some of my friends—they were kind of scared of water—and they had to do underwater pictures with me,” said Ambrosio.

Quite different than a London-based fashion show, right? Elsa Hosk, an Angel who walked in London and might be pretty recognizable from the brand’s PINK campaigns, explained that in addition to seeing the girls hike up mountains and shoot in caves to grab that catalog pic, we’ll also see interviews from stylists, the models themselves, and photographers. “It is so different. I think people were expecting a show on the beach with the wings, but this is the actual backstage look at how our shoots are done,” says Hosk.

And since it was right after the runway show, she says they were physically prepping for that as well.

We couldn’t help but ask Ambrosio one of her diet secrets, either. “I love green juices and coconut water. I was in Brazil for like three weeks, so I was drinking like 5 coconut waters a day. I just love that. I try to be as fresh as I can,” says Ambrosio.

In addition to the action-packed scenes, Ambrosio says the beauty look of the show will be noticeably natural and all about establishing a nice tan, as they turned to the Victoria’s Secret tanning lotion for a bronze, natural look on the beach.

Curious as to the beauty skill or look these girls have perfected in real life? Ambrosio has conquered falsies. “I could never use those fake eyelashes with the whole string. I was always terrible. I was always watering my eyes. I couldn’t open my eyes. I learned how to do the single lashes one by one.”

Hosk has a knack for eye makeup, as well, explaining that she’s sharpened her cat-eye skill with the help of one very important product. “I think I’m really good at a cat-eye. That’s the only thing I do when I go out. I just do a little black cat-eye. I use a tattoo pen. It’s from Kat Von D. I’ve tried everything and this is the best one.”