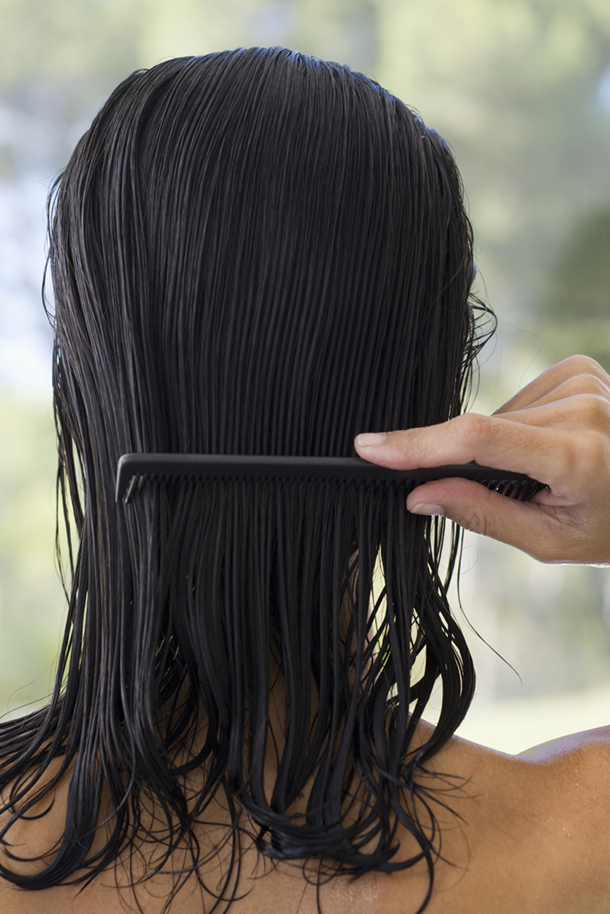 Curling, straightening, a super polished blowout—we’re advocates of doing what we need to do to get the hair that we want, but it’s fair to say that sometimes our hair just needs a break. That’s when we turn to air drying which, truth be told, is a little bit more involved than it seems. If wash-and-go is your thing, then by all means, go for it… but if you find yourself unhappy with the results, you may be making one of these 5 major air drying mistakes.

Mistake: Sleeping on Wet Hair
Sleeping on wet hair seems like a good idea—shower before bed, hit the sack, and wake up with dry locks and sexy bedhead (literally) in the morning. Not so! Wet hair is extra susceptible to damage and breakage, and the combination of cotton pillowcases and tossing and turning can not only cause tension that tugs at and breaks hair, but tons of frizz and tangles. Avoid it at all costs, even if it means giving hair a rough blow dry. You’re better off exposing it to a bit of heat.

Mistake: Rubbing Hair with a Towel
Using a bath towel is considered the standard way to dry off the hair after washing, but if done incorrectly, it’s basically the fastest route to breakage and frizz. Instead of hopping out of the shower and twisting hair to release excess moisture, then rubbing dry with a towel—both things you should not do—use your hands to gently squeeze out extra water in large sections, then do the same with a towel, blotting and squeezing the hair rather than rubbing or wringing.

Mistake: Leaving Hair Too Wet
It goes without saying that proper towel drying technique is critical, but leaving soaking wet hair to dry on its own won’t do you much good, either. The more water you can absorb before leaving it to air dry, the better, as super wet hair will just take forever to dry. Because wet hair is damaged more easily, this is no good, not to mention that leaving it wet for too long tends to result in frizz (and lots of it).

Mistake: Not Using Product
Part of the allure of air drying your hair, aside from avoiding the potential damage from heat styling, is the effortlessness of a natural, “I woke up like this” texture, but that doesn’t mean you should skip product. All hair types should follow up towel drying with a detangling leave-in conditioner and use a wide-tooth comb to break up knots and smooth out the hair before adding product. You know best what your hair needs, whether it’s volumizer, curl-enhancing cream, or a texturizing spray, but we recommend starting with a frizz-fighting serum and a light-hold styling cream.

Mistake: Using a Hair Tie
Hair is at its most fragile when it’s wet, so pulling it back into a ponytail or bun as it’s drying is a huge cause of breakage. Using hair ties will also result in strange kinks and texture once hair has dried… and furthermore, sleeping on wet hair that’s also in a bun to get waves is a recipe for disaster. If waves are what you want, try using a balm or styling cream and twisting hair in sections as it dries so that you don’t put stress on your strands.

Read more from Daily Makeover: The Right Way to Wash Your Hair