Most women at some point in their lives have experienced one of those mornings where everything you put on your body looks awful, every glimpse into the mirror is “ugh,” and every thought in your head is resoundingly negative. It’s called a ‘fat’ day, and we’ve all had them, regardless of our weight.

Of course, our first instinct is to blame that extra slice of pizza or the pint of ice cream in the freezer, but according to research from the University College London, feeling fat or feeling thin is a actually illusion created in a part of our brain called the posterior parietal cortex, which integrates sensory signals from all over the body. Which basically means it’s all in our heads.

MORE: 50 Healthy Habits Every Girl Should Have

While that’s all well and good, it doesn’t always help us when we’re running 30 minutes late because we hate the way our stomach looks in a fitted dress. That’s why we’ve rounded up 6 things you can do that’ll not only banish your fat day in the physical sense, but also boost your mood on days when you’ve taken to bullying your own body. 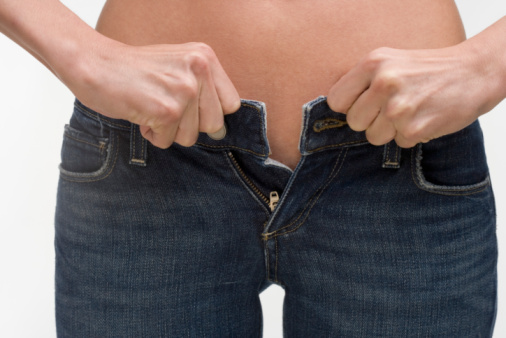 We’ve all been there. (Getty)

1. Get moving
As dreadful as it can be to wake up an hour early to hit the gym, or head there after a long day at work, it’ll pay off on three levels: Exercise produces mood-boosting endorphins; sweat is largely made up bloat culprits like sodium; and it gets your blood pumping, giving you a rosy, healthy, glow. Don’t belong to a gym? Try following a 15-minute workout in the morning from YouTube, or pledge to run, bike, or speed-walk around your block a few times before getting dressed for the day.

2. Drink lukewarm water with lemon and cayenne pepper in the morning.
This first-thing-in-the-morning drink gets your organs going, and fresh lemon juice and cayenne pepper both have major anti-fungal, immune boosting, and detoxification properties. Plus, Lemon juice is nature’s best tool for aiding in digestion and regularity, destroying bacteria, bloat, and cleansing the system. It might be hard to swallow at first, but you’ll get used it, and your body might start to crave it in the early hours.

3. Blast empowering music.
If you’re battling a fat day, one of the best things you can do is listen to tunes … loud. Below are three of our go-to, female-sung tracks that’ll bust low-confidence days—we promise.

4. Eat clean, belly-busting foods.
Certain foods have the power to banish bloat, so if you’re not feeling super-svelte, make sure to start your day with a cup of probiotic-packed low-fat yogurt. For lunch and dinner, lean protein or a spinach salad with plenty of veggies and a little monounsaturated fat like avocado and olive oil will do the trick.

Avoid white flour, processed foods, artificial sweeteners, and carbonated drinks like the plague, which can create air bubbles in your stomach. Sticking to clean eating without booze and soda for a few days will make dreaded fat days disappear.

5. Reach for slimming clothes.
If you’re battling a fat day, dark colors are your definitive BFFs. Using one color to enhance a slender illusion is the oldest trick in the book, and for a good reason: It helps create a long vertical line. While wearing head-to-toe black is the most effective—and eternally chicest—way to look thinner, other dark hues work well too, such as navy, oxblood, and green. The trick to looking slim and streamlined: Keep each silhouette crisp and tailored, and stay away from clingy clothes in pale shades like beige.

6. Don’t beat yourself up.
Changes are, the flaws you’re seeing the mirror today are only visible to you, and you alone. As women, we tend to beat ourselves up  over every little imperfection, which in turn creates a whole mess of negativity. Instead of harping on bad feelings, make a mental checklist of things that are going right today—your awesome family and friends, your fulfilling job, your health—all of which are more important than the fact you’re feeling “fat” right now.