With nail art an ever-popular trend, there are even more ways to show your patriotism than before. Wearing an American flag on your chest or tattooed on your arm isn’t the only option anymore.

Nail art has become the new go-to accessory over the past couple of years. So why not show your patriotism on your fingertips this 4th of July? While some bloggers go all out with eagles and flags, others choose a simpler route with just a few stars or easy stripes. Whatever your skill level, there is sure to be something that inspires you to try out on your nails this coming 4th of July holiday.

Check out the slideshow to see 50 different ways to sport red, white and blue on your fingertips. Plus, if you want a chance to win NCLA’s Fiercely Independent nail wraps to add a bit of edge to your 4th of July manicure (and cut out the polish time) let us know in the comments section below what your holiday plans are — two winners will be selected at random! 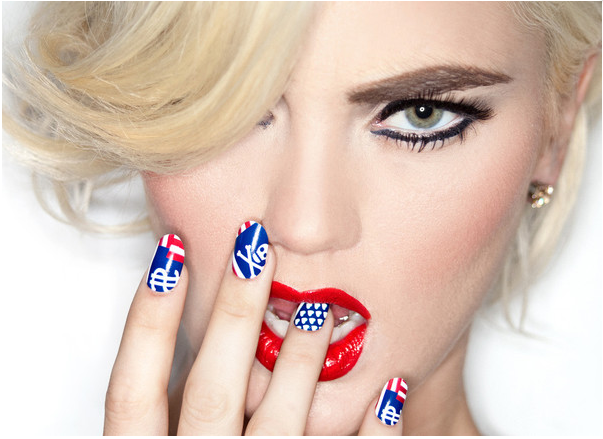 **Winners must be 16 years and older and residents of the U.S. All winners will be selected by 6/29 and notified by email later that day.

Click through the slideshow to see your many nail art options!

Instead of drawing tiny stars, you can put little dots on the blue part of your flag nails.

This flag nail art used a nail stamp to achieve this print.

This patriotic set uses silver and gold instead of white. The thumb and ring finger are channeling Wonder Woman.

Add some sparkle to your accent finger to really make it pop.

Don't want to go all out with flags on your nails? Try just having an accent finger in the festive colors.

Here is another flag nail that uses nail stamps to get the perfect wave.

These striped nails look cool with the subtle silver stars.

Stripes? Check. Stars? Check. This blogger did an excellent job of combining the two into one.

These extra long nails have American tips instead of French tips!

These patriotic leopard themed nails are a fun take on the popular animal print.

These firework inspired nails are sure to grab anyone's attention at a 4th of July party.

Instead of the classic horizontal stripes, try mixing it up with vertical ones.

This look would also work when supporting your country at the Olympics.

Instead of stripes, try alternating red and blue dots.

If you're willing to put in the time, a flag nail is totally worth it.

The angled stripes with white details look great with the silver and blue glitter polish.

Try starting off with a blue base, then adding red glitter polish and thin white stripes.

These awesome candy striped nails look patriotic and chic at the same time.

Add a glitter top coat for some bling on your nails.

Dots, stripes, and stars all work well together in red, white and blue.

Here is another style that not only works for the 4th, but once the Olympics begin, you will be showing support for our country's team.

Another option is to try ombre nails. Try having ombre blue nails on one hand and red on the other.

via The Beauty Department

Put some patriotism in your step by using fun stars and stripes on your toes.

Using a nail pen, add big stars to your nails and thin stripes.

This blogger went the fireworks route instead of sporting red, white and blue nails.

The flag on one finger stands out against the other solid colored ones.

Lauren Conrad shows you how to sport Fourth of July nails with nail stickers.

This nail blogger went all out, with flags, eagles and fireworks all on one hand!

Glitter tips are not only fun but show a hint of the patriotic colors without being cheesy.

Here is another way to try splatter nails, only this time with white star stamps on them.

An all glitter nail will definitely sparkle on the 4th.

Try all white nails with blue and red stars.

These fancy acrylic tips go all out with stars and stripes.

This pattern is more modern, while still showing off the American colors.

Try matching your toes and nails for a complete patriotic nail look.

Add some confetti glitter polish to your striped nails.

The simple blue and red lines add some color to the clean white nails.

Adding an anchor lets you be nautical and patriotic at the same time!

Add a detail to the tip of your nails, like these crossover lines.

This blogger used the Konad nail stamps to create this stars and stripes effect.

This mani has a little bit of everything.

Using a thin piece of tape, paint red glitter on one side and blue on the other. Once you're done, remove the tape, and Voila!

This cute manicure has detailed tips with blue, white and silver.

Prada Gets In On the Graphic Tee Trend