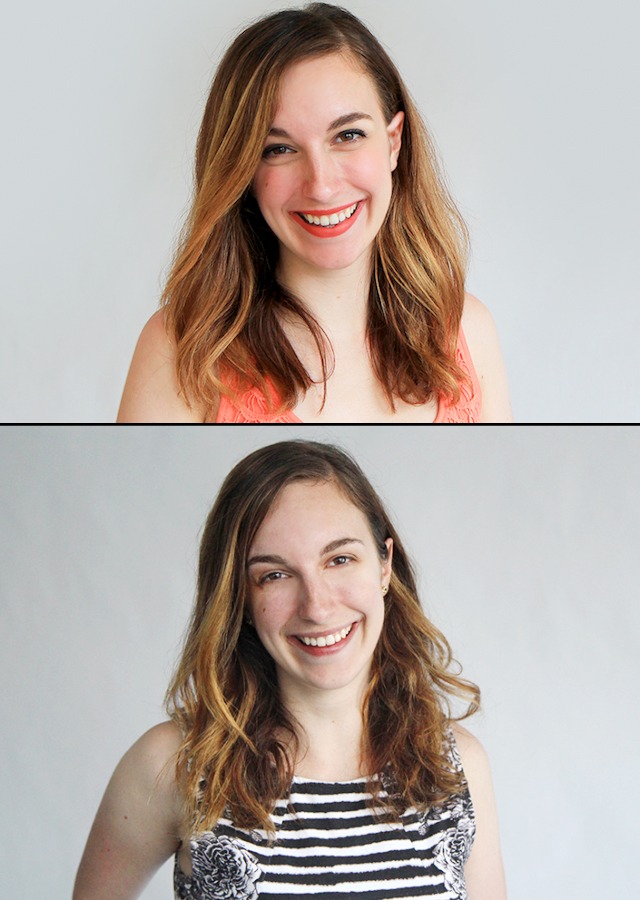 If Rachel McAdams can go without makeup on the cover of Allure magazine, it’s possible for a beauty editor to go without makeup for three weeks, right? Maybe it’s Colbie Caillat‘s new makeup-free music video for her song “Try,” or it’s all of the #NoMakeup selfies celebrities have been posting to Instagram lately, but after seeing enough women posting their natural stories for the public to see, it got me curious. I’ve been wearing makeup since the ripe age of 12 years old, and now that I’m in my 20s, it only seemed right that I give the bare faced look a try.

Originally, I had set out to make it 30 days without makeup. I’d gone makeup-free on the weekends for months, so how hard could it be? Turns out, when you work at a beauty website, going bare-faced (while simultaneously going without face wash, which you can read about over on Beauty High) is quite the challenge. My usual makeup routine isn’t anything too crazy day to day. Between concealer under my eyes, blush, eyebrow powder, and mascara, I’m usually only using four products on a regular basis. Before this experiment I was under the impression that makeup wouldn’t affect me one way or the other—how could four products make such a difference?—but after 21 days without wearing makeup, I had a much deeper appreciation for my little arsenal of cosmetics.

Before baring it all for three weeks, I prepared myself mentally for the responses I may get from others. Every girl knows that on the one day she hits snooze too many times and isn’t able to apply makeup, the day is spent answering the question, “Are you sick?” If I could figure out every possible question I’d get beforehand—Are you okay? Are you not wearing makeup? Did you change your hair? Were you up late last night?—I’d be prepared to answer anything without letting it get to me. You can imagine my shock when in three weeks time, I was asked questions twice, each time so nonchalantly that there was barely a blip on the radar. It just goes to show we’re our own toughest critics.

Here’s the thing: It’s not necessarily that I feel like I need makeup to look good. Sure, I prefer the way I look with some makeup on, but that wasn’t the most intense pain point. About two weeks in, I realized that I wasn’t taking my usual 20 or so minutes in the morning to put myself together. Who wouldn’t sneak in the extra sleep if they could cross something off their To Do list? Not using those 2o minutes in the morning for myself, however, proved to be a pretty negative start to each day that would only continue downhill. Without the time to get ready, my body basically woke up and went out the door without any warm-up for the day, like if you tried to run a 5k without stretching. You can still run, but you’re going to be hurting pretty quickly.

About 19 days in, something struck me: In the past 19 days, I had spent more time looking in mirrors than I had in the past six months. Between mid-morning checks to see if my dark circles had calmed down yet to afternoon checks for any sign of flush in my cheeks (and about 10 other mirror moments throughout the day), I was spending so much time focusing on my appearance that it was practically making me depressed. When I have makeup on, there’s a short time of application in the morning, and then nothing but cursory glances in the mirror while washing my hands. There’s no obsessive self-checking going on. In this completely unforeseen turn of events, giving up makeup had actually made me focus more on my appearance, which was the exact opposite of the point of the experiment. So, after 21 days, I called it a day and picked up the mascara.

Makeup (and appearance, for that matter) isn’t synonymous with happiness or confidence. It’s not like I was unable to be happy or confident in the three weeks without makeup. What got me the most was how much I was still focusing on my appearance, even though the goal going into 30 days without makeup was to care less. I’m all for having fun with cosmetics and enhancing your own unique features with makeup (my job is to experiment all day long!), but after this experiment, I’m so much more appreciative of the smallest dab of concealer or swipe of mascara, if for nothing else, then to center myself in the morning and keep my mind on more important things throughout the rest of the day.

Read more: 6 Rules for Mastering the “No Makeup” Makeup Look