Na na na na na Batman! There’s a Batman advent calendar
and it includes a Batarang keychain, Penguin’s umbrella and and Robin ornaments a.k.a. everything you could ask for this holiday season.

Created Insight Editions, the brand behind collectible books and advent calendars for Friends, Harry Potter, Star Wars Marvel and more franchises, The Official Batman Advent Calendar: Christmas in Gotham City features 25 pockets that fans can open as they count down the 25 days to Christmas. Inside the pockets are 25 exclusive Batman-themed items such as ornaments with Batman’s iconic sidekick, Robin; a keychain in the shape of the Caped Crusader’s signature weapon, the Batarang; a pencil with the logo of Bruce Wayne’s company, Wayne Industries; and a coffee coaster with the face of Batman’s villain, Mad Hatter.

The calendar itself is decorated in comic book-style illustrations of Batman and other Gotham City characters, such as Robin, Batgirl and Joker. The Official Batman Advent Calendar is available on Amazon
. But don’t wait to order it. If the Batman advent calendar
is anything like other Insight Edition advent calendars (which sell out well before they’re officially released), we recommend that you order this Batman
fan item now. 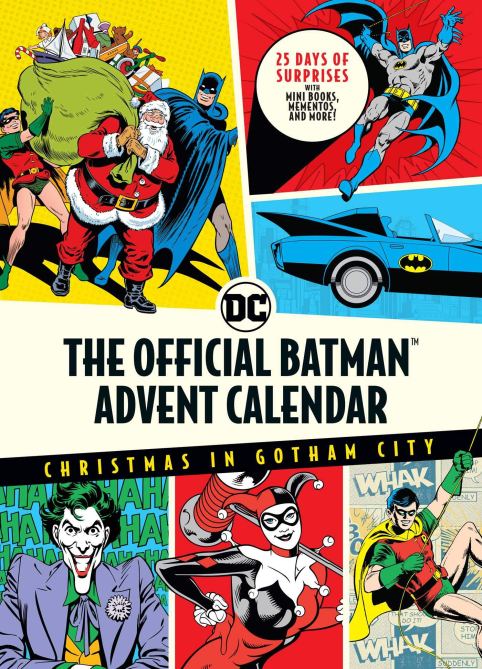 Batman made its debut in the DC Comics universe on March 30, 1939. The comics follow Bruce Wayne (a.k.a. Batman), a wealthy playboy, philanthropist and industrialist who lives in the fictional metropolis of Gotham City. When he was a young boy, Bruce’s parents,Thomas and Martha, were murdered in front of him. After that, he swore vengeance against all criminals and trained himself physically and intellectually to fight them.

Since Batman’s debut, there have been dozens of movies and TV shows inspired by the Dark Knight. Michael Keaton, George Clooney, Val Kilmer and Christian Bale are among the actors who have played the Caped Crusader. Ben Affleck was the most recent actor to play Batman in 2021’s Zack Snyder’s Justice League. Robert Pattinson is the next actor to wear the superhero’s iconic cape in 2022’s The Batman, which will be directed by Matt Reeves.

The Official Batman Advent Calendar: Christmas in Gotham City: 25 Days of Surprises with Mini Books, Mementos, and More! is available on Amazon
.