Very few people in the world can claim to have touched as many famous people as can Bang Bang, the New York-based tattoo artist who has inked the likes of Rihanna (and her bestie Melissa Forde), Cara Delevingne, and Justin Bieber, amongst countless others.

His real name is Keith McCurdy, but he prefers going by Bang Bang. While he’s very close with his clients–he’s known Rihanna for nearly 10 years now–he sat down with StyleCaster and gave us a few juicy details on what it’s like putting ink on some of the most famous people in the world.

SC: How did you get started tattooing all these incredibly famous people?
Bang Bang: It really all started with Rihanna’s gun tattoo. I was really the only person to have a picture of her after her issue with Chris [Brown]. So I posted it on MySpace, and my phone didn’t stop ringing.

They all wanted to know how she was doing, and I was like, “I don’t know what to tell you, she’s great, I’ve known her for years, she’s fine.” I didn’t ask her what happened. It’s not my business. I’m not the paparazzi; I’m her friend. I had been tattooing her since we were teenagers. I was 19 the first time I tattooed her, and she was 18.

SC: So how did you meet her initially?
BB: On West 4th street in New York. She asked a friend of mine who was the best tattoo artist out there, and he lied to her and said it was me. I was the king of the sewer at that time. We’ve been friends for nearly 10 years now. She’s unbelievable. I love her, I’m so inspired by her.

And the fact that she can handle all of it too; the more that my name gets out there, I ask myself, “How does my girl handle this?” She handles it so gracefully. That’s the most impressive part. I’ve always known she’s talented. So the talent isn’t surprising anymore, we expect her to rule shit. But how she walks through a room and owns it, is amazing.

She’s got quite a bit from me. I’ve told her, “You can get tattooed by anyone you want, just make sure they’re good!” But I’m the only one she comes back to. She knows that I know that she can go anywhere in the world and get tattooed by anyone she wants, and she’s comfortable with me, and we’re friends. It’s an honor. It’s what most of my clients feel. People who keep coming back, it’s an honor.

SC: So what was the first tattoo you did on her?
BB: Sanskrit on her hip. Very linear. She wanted to do it on the back of her leg, but it wasn’t complimenting her shape. And then she wanted to do it on her ribs, but it just didn’t fit well. When we put it lower, it was perfect. It’s a prayer that she had on her necklace. She and Melissa Forde have it. 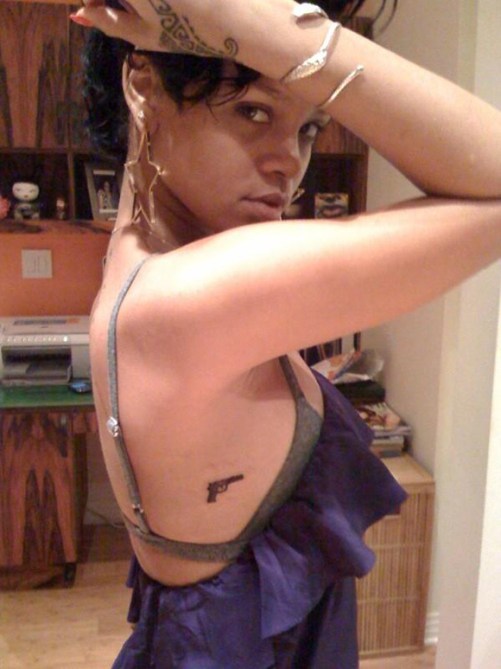 SC: And what about the gun?
BB: The gun, actually, started two years earlier. She was in the shop to get a tattoo on her forearm; she didn’t know what she wanted, she just knew she wanted a tattoo. I was like, “Get that gun!” She had a necklace on with a gun on it. I was like, “I love guns obviously, my name is Bang Bang. Just get the gun, bitch!” So then I got out of bed in the middle of the night to go do the gun for her.

She initially wanted something else and I told her, “I’m not gonna do it. I don’t like it.” And that’s the thing about us: she trusts me. You see girls now walking down the street with tattoos on their collarbones, and that’s because of Rihanna! It’s cool to see. Somebody told me that I have influenced women’s tattoos across the world. I’m like, maybe I have! Hers says, “Never a failure, always a lesson,” and it’s written backwards, so you can read it in the mirror.

SC: We would love to be flies on the wall for these interactions you have with celebrities! Any juicy bits you want to tell us?
BB: I can share that I know everything everybody wants to know. And that I ain’t telling anything. Only because they’re friends. I’ve spent my career with Rihanna. She’s been my biggest fan. She was the first celebrity I did, and she led me to work with Katy Perry on her tour. I traveled with her dancers and her band, we flew everywhere for a week. It was sick.

I feel like celebrities are these things we see on TV or in the magazines, and we don’t feel like they’re real people, they’re just images or icons we look up to and want to be. But they’re just normal. They’re just regular people who happen to do something we all love. When I know I’m going to tattoo someone famous, I try not to find anything out about them before meeting them.

I don’t know any of that stuff, I’m very out of the loop. I didn’t know who Cara Delevingne was before I met her.

SC: When Cara came to you the first time, it was her first tattoo ever right?
BB: I love that girl. I went to the Gansevoort Hotel and tattooed her in Rihanna’s hotel room. It was just me, Rihanna, and Cara. She was chilling, she was like “I’m gonna ride it out.” She can be very peppy and really exaggerate a lot, super free spirit. She almost moves like Johnny Depp in “Pirates of the Caribbean” sometimes. She’s real quirky. Her Instagram tag is “Embrace your weirdness,” and she loves who she is and that’s awesome. That experience was cool.

SC: And she came back for a second one right?
BB: I did four on her! The lion on her finger, the side of her hand, the “Made In England” on the bottom of her foot, and I also did one that nobody knows about. I’m sure they’ve seen it; there’s a half heart on her pinky. She got it with one of her friends. It’s out in the open but I don’t think anybody’s caught it yet.

SC: It seems like the bottom of her foot would hurt.
BB: Well, I numbed her. She didn’t seem to take it too bad, so I hope it helped.

SC: Justin Bieber came in recently to get the eye in the crook of his elbow.
BB: Yeah! I almost tattooed him again last night, but it didn’t work out. We’ll get there.

SC: How long did the eye take?
BB: Maybe about 20 minutes. It was in a painful spot and he asked me to move my ass, and also the spot that it’s in, you can’t render a ton, so we do it a little simpler. It’s a high motion area, and the skin isn’t as forgiving. You gotta get through that area quick. He knew exactly what he wanted with this one. I’m real honest with him; I told him some of the stuff he was getting was crap, and he knows it. Live and learn. We all have some bad ones. He’s getting back on track.

SC: And what did the eye mean to him?
BB: It’s for his mom. That’s cool, we’re all Mama’s boys. I have a tattoo for my mom. You’ll never regret a tattoo for your mom. It’s timeless, which is what a tattoo should be.

SC: Justin’s gotten into a little bit of trouble lately. What is he like in person when you’re tattooing him?
BB: Calm. I think he’s calm. He seems pretty calm to me. I cannot imagine what it’s like to be him. I like him a lot. He’s been very cool to me. If there were ever a person who could be a little bastard, it would be him. But he doesn’t seem that way to me at all. People call him a lot of names and say that he’s terrible sometimes, but I don’t see it. I only see a talented kid who the world treats differently.

How could you expect him to act like your or I when the world doesn’t treat him like you or I? He cannot walk down the street. He cannot do it. Can you imagine what it’s like? He pretty much is in a quarantine between wherever he is or his car or the stage. His world isn’t like our world, so knowing that, he is as grounded as anyone I have met.

MORE STAR TATTOOS ON STYLECASTER:
Cara Delevingne Gets “Made In London” Tattooed on Her Foot
Everything You Need to Know About Melissa Forde