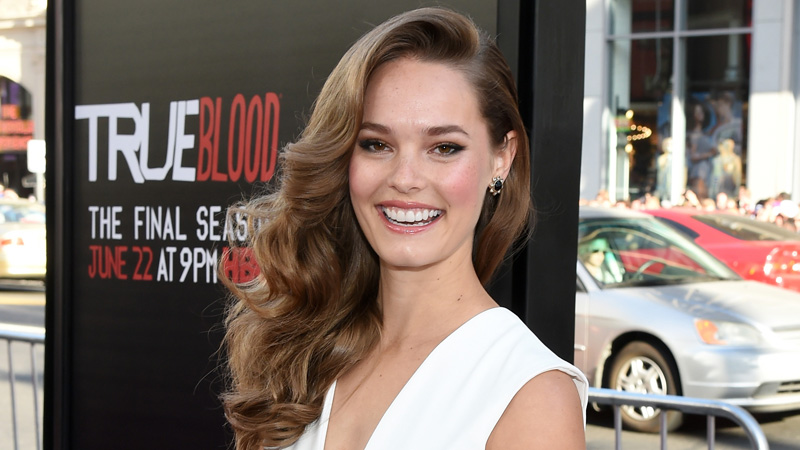 “True Blood” fans will immediately recognize the gorgeous Bailey Noble as the telepathic—albeit naive—half-faerie Adilyn Bellefleur. Noble, who became a series regular on the show in 2013, has been a breath of fresh air in Bon Temps since her arrival.

We had the pleasure of catching up with the rising star, who chatted with us about everything from what to expect from her character this season, to her favorite places to shop, to what she plans to do when her hit show wraps its six-year run at the end of this season, which begins Sunday. And for those “True Blood” addicts out there, Noble does know how the series wraps up—just don’t expect her to spill.

MORE: See What The ‘Game of Thrones’ Cast Looks Like in Real Life

It turns out, Noble wasn’t a fan of the show until she was cast, which naturally led to an epic “True Blood” binge-watching session. “I just watched all of the seasons, all at once” she told us. “And I kept saying, ‘What’s next! What’s next!”

As for what it was like to join the tight-knit cast? “[They] were so welcoming from day one. Everybody is, but Chris Bauer [who plays Andy Bellefleur] is really awesome. He’s taught me a lot about how to be comfortable and present on set.”

In terms of where her character’s going, Noble did say that fans can expect a few surprises. “Adilyn, she’s going to experience lot of firsts—the good things in life, the bad things in life. She has a lot to learn, which makes her an exciting character to play.”

Now to the good stuff—”True Blood’s” hot guys and famous nude scenes. We pretty much begged Noble to dish on who she thinks the hottest guy in the cast is, and her pick is Ryan Kwanten [who plays Jason Stackhouse]. “He’s so cute and awesome in person,” she told us.

MORE: The 15 Most Annoying TV Characters of All Time

Noble, like many of the female characters on the show, has shot a topless scene for the show. “I was really nervous about that,” she told us. “It’s a big part of the show, though. Everybody was very respectful, and by the end of it, it didn’t feel like such a big deal. Everybody made me feel really comfortable.”

When Noble isn’t playing a faerie on TV, she embraces L.A. style, and loves basics like T-shirts. “I like to dress really simply,” she told us. “Solid colors, T-shirts that I dress up—my style is a bit bohemian.” As for her style icons? “Cameron Diaz, I think she keeps it real, Jennifer Garner, and Diane Keaton—I just love her style so much!”

Still, every once in a while this casual California girl has to dress up for red carpet events. “I have really great hair and makeup people, so getting ready for the red carpet really just feels like hanging out,” she says. And Noble loves her shoes. “I do love to wear heels. I am a shoe girl for sure. Ever since I got a pair of black patent leather little heels in the first grade, and I felt so cool walking around the halls, I knew that shoes can make an outfit.”

MORE: The 50 Most Stylish TV Characters Of All Time

As for the finale of “True Blood” Noble knows how it ends, but she’s naturally sworn to secrecy. “I do know how the show ends. I can’t say anything, but I have read the script.” When it does end, Noble says “[I’m] probably just going to cry a lot, but I’m also really excited to hit the ground running and start auditioning.”

The roles Noble is dying to play next? “I would love to play a strong female role in an action film, and I’m dying to try comedy!”