The first step of planning a bachelorette party involves a pretty big decision: Where the hell are you going to have it? Las Vegas is an iconic pick, Nashville’s on the up-and-up, and it’s pretty hard to go wrong with a beachy spot like Miami or Key West. But what about New Orleans? Or Charleston? Or Los Angeles?

The question becomes even more complicated when you start factoring in cost.

Lucky for you, Upgraded Points, an online resource that helps people take full advantage of their travel rewards, just released a report that might make the decision-making process a little easier.

MORE: 33 Bridal Jumpsuits So Cute You’ll Want Them Even If You’re Not Engaged

Upgraded Points dug up the top 24 bachelor and bachelorette party destinations of 2018 and assessed the average cost of a three-day trip to each. They considered things like airfare, lodging, food, cocktails, beers and popular tourist attractions when determining these cost estimates, and the results might make you laugh or cry (or both).

It should come as no surprise that New York City and San Francisco are some of the most expensive bachelorette party destinations, with both coming close to about $2,000 for a three-day trip. And the fact that Milwaukee will only run you $1,161 isn’t too shocking, either.

But Las Vegas being the second least expensive—only $14 more expensive than Milwaukee? I mean, who’s ready to book a couple round-trip tickets to Nevada? Because I am.

It’s worth noting that cocktails were most expensive in Miami and Key West, with people spending an average of $260/weekend. (For context: The least expensive cocktail cities were Memphis and Milwaukee, each of which will only run you $138/weekend.) 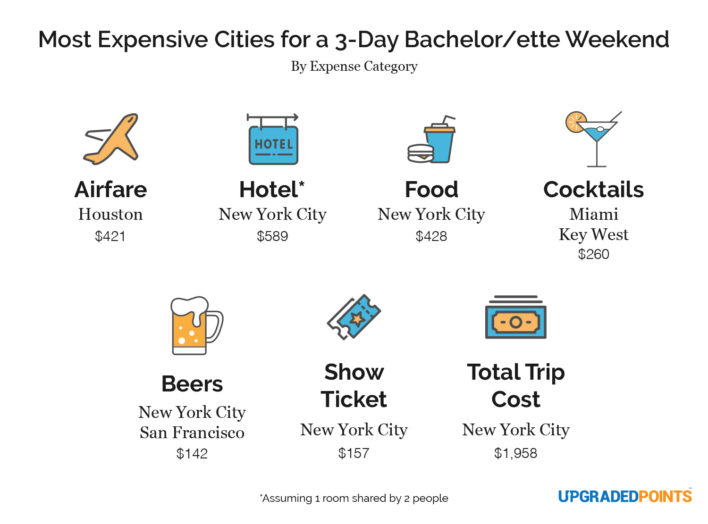 Remember, these were all averages—and they were based on data Upgraded Points got through the Bureau of Transportation, alcohol.org and so on. It’s totally possible to throw a bachelorette party that costs less (or more) than the averages listed here.

Still, this report’s a pretty good place to start when it comes to planning—and it’s an even better reminder that bachelorette parties are expensive AF. (Even the cheapest, $1,161, is no joke.) Start saving now—you’ll thank yourself later.