Awkwafina has starred in movies like Crazy Rich Asians and The Farewell, but she promises that her next film, Shang-Chi and the Legend of the Ten Rings, will provide a “different level of representation” that Asian-American audiences haven’t seen before.

“I was pretty blown away at the different level of representation that it shows,” she tells StyleCaster. “I’ve been a part of some movies that definitely have representation, but I haven’t seen something quite like this. I think that’s the really cool thing of how representation is evolving.”

Shang-Chi, which stars Simu Liu and premieres on July 9, 2021, follows the Marvel Cinematic Universe’s first Asian-American lead, Shang-Chi, a master of kung fu and superhero. “I didn’t really know what it was about. I knew it was about the first Asian-American Marvel superhero,” says Awkwafina, whose character hasn’t been revealed yet. “It wasn’t until I met with Destin Cretton, the director, that I got his vision of how this would be different in the tropes that he would want to avoid in the retelling of this story.”

After production was postponed due to the COVID-19 pandemic, Shang-Chi finished filming in Australia in October 2020. However, Marvel’s next blockbuster isn’t the only way Awkwafina has kept busy in 2020. Along with filming a superhero movie, Awkwafina also partnered with Heineken for their “Bestie Gift Ever” campaign, which allows people to send cardboard cutouts of themselves to friends they can’t be in person with. “It’s basically trying to find ways to connect with our loved ones at a time when connections are really hard,” says Awkwafina, who surprised one of her friends with a mobile karaoke booth.

Ahead, Awkwafina talked to StyleCaster about her mystery character in Shang-Chi, the Marvel character she would want to meet IRL and what it was like to record her upcoming Disney animated film, Raya and the Last Dragon, in her home. 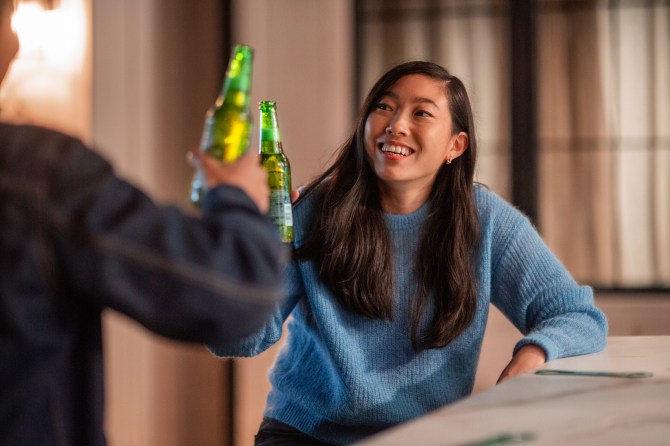 On her secret character in Shang-Chi

“There’s a little bit of me in every character I play, which is a good and bad thing. I do feel like I can relate to her. I can’t say much about the role, but I can say that she is thrust into a world where she doesn’t really know what to do. At the same time, she’s discovering things about herself. The Marvel universe is incredible. To work within it is like utopia. Nothing goes wrong. Everyone is so supportive. Everyone is super passionate and into it at every level. I’m really excited for people to see it.”

“When you think about certain things that have characterized Asians and Asian Americans in American media, you think about things like kung fu and martial arts. While this movie is actually about that, we were able to work with world-class stunt teams of people where this is their livelihood. So the authenticity that the studio and Destin approached those tropes is very, very special. When you want to avoid certain things, you have to be authentic with it. You have to do it the right way. Everything that this movie is about in terms of the culture and also the action movie genre, it’s authentic every way through.”

On the Marvel character she would want to meet IRL

“This is public knowledge that I love Groot. I enjoy Loki. I Loki. There are a lot. But Groot, if I could meet anyone, I’d like to meet Groot to just hang out. Maybe also Wandavision.”

On what drew her to Raya and the Last Dragon

“When I first heard about it, it was a concept that I never heard of and couldn’t even imagine. Two strong, female characters, one a warrior princess. When I first heard about the idea and was introduced to the team and the director and the animators, I knew that this is going to be very special, especially with Kelly Marie Tran involved. I’ve seen some footage of it and I sometimes question if it’s live action or not because it’s so real. The beauty about Disney is there’s always this human element, something that’s very greatly relatable to all the characters. I definitely relate to both Raya and Sisu, my character, who is a water dragon.”

On recording Raya in her home

“Toward the end, we were still recording into COVID. That led to a lot of impromptu setting up the mic in my own house with horrible acoustics, recording for a Disney movie. That’s the cool thing with voiceovers. Unlike being on a set, you can kind of pick it up wherever you are. It was a process. You re-record scenes over and over again. Things would change. Characters would change. It’s a constantly evolving process, which is new for me to witness how Disney works. There’s so much hard work involved for the smallest details. It’s a constantly evolving vision.”

On the first time she met Kelly Marie Tran

“I met Kelly maybe a year ago. We share sometimes the same hair guy, so we know each other through him. But we haven’t had a proper chance to sit down and talk, which I’m definitely looking forward to doing soon. I wasn’t able to be in the same studio as Kelly.”

On how Asian-American representation in the media has changed

“I think maybe the only coincidence is that I’m Asian. I don’t really seek out Asian-centric content as my main thing. I seek out stories that I am impacted by. With Crazy Rich Asians, I remember reading the book and being a really big fan of it and knowing that this would be the first time that would happen. It would be a big interest. The Farewell was my relationship with my grandma and what that meant to me and how that role was super unique. With Shang-Chi and Raya, those were more for me, just to be a part of a Disney movie, especially in an animated role, which was a dream for me. And I also believe that Shang-Chi will have some significance because it’s significant to me. There are different reasons that go into things, but there was a time when there weren’t a lot of Asian-centric movies. There weren’t a lot of Asian-American casts. I hope we get to a place where they’re just more a part of mainstream media.”