As you might have noticed, the Golden Globes looked just a little bit different this year. What I mean is, almost the entire thing was held virtually thanks to some (very necessary!) pandemic precautions. While the actual nominees weren’t allowed to attend the show this year, the presenters were able to serve up some seriously amazing looks to hold us all over until the days when red carpet looks actually happen on the red carpet. Awkwafina’s Golden Globe look was one of our faves, as if we couldn’t love her any more than we already do.

I honestly should never doubt Awkwafina when it comes to her red-carpet fashion. She is, after all, the same woman who showed up in a stunning Dior tuxedo outfitted with a ruffled white collar to the Golden Globes last year. I would even go so far as to say that her Victorian era-inspired look paved the way for the slew of corsets that we’ve all been obsessing over this year!

As if her night wasn’t good enough in that killer tuxedo, she also took home the Best Actress in a Motion Picture trophy for her performance in The Farewell last year. Yes, it was nominated in the comedy category and yes, I spent the entire second half of that movie in tears. The power she has! 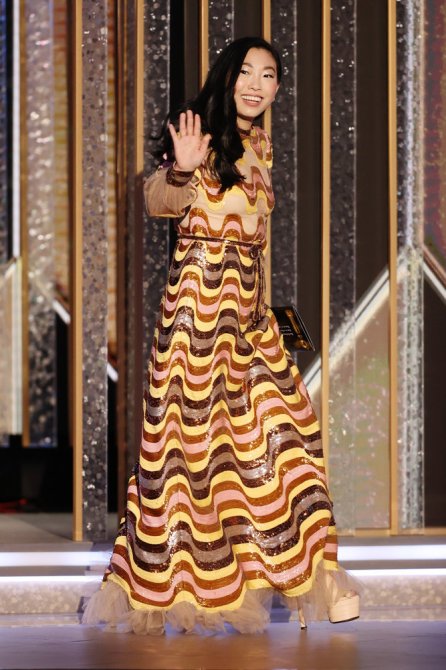 Despite the fact that Awkwafina wasn’t actually nominated for a Golden Globe this year, she looked every bit a winner in a long, sparkly gown by Gucci with bling by Harry Winston when she took the stage to present towards the end of the night. I loved the wavy stripes and colors, a blend of copper, pale pink and soft yellow, which gave me major ’70s glam! Sequined stripes are always a good idea, people. Plus, the beige tulle hem and sleeves gave it an extra-playful feel.

Lest we forget about her beauty look—fans loved Awkwafina’s gold lip last year, but this time around she kept it super minimal with a fresh face and extra-blushed cheeks. Her long, dark hair was swept to the side in shiny loose curls.

Awkwafina, thank you. This cheerful Gucci look single-handedly cured my Sunday Scaries. It was just right! Shout out to all the presenters and nominees who dressed up to give us a Golden Globes worth remembering! Even the ones who stayed home.