As if the Kardashians weren’t getting enough press thanks to an over-the-top wedding, a supermodel sibling, and a new season of “Keeping Up With the Kardashians,” Kim Kardashian now has a wildly popular video game on her hands. Not only is the game pretty darn addicting, it also can end up costing you money—often without you even realizing it.

Well, one author and mother Ayelet Waldman has had enough, and took to social media to pen an epic rant against the Kardashian game after her 11-year-old apparently spent $120 over two days on the game, by accident (h/t to Gawker). According to Waldman, her son was “crying hysterically” upon realizing he’d gone way over his allowance. The author blames Kardashian “trickery” for the ruse, claiming the game “preys on children” and is “pure evil.”

Whoever designed the Kardashian Hollywood game is an evil scumbag to end all scumbags. Why am I not surprised? Preying on children.

Why is the Kardashian app such a high earner? Because it preys on children who don’t know how much it’s stealing from them. Pure evil.

Waldman then took to Facebook to share the same message—encouraging parents to watch their kids’ phones carefully and delete the app. 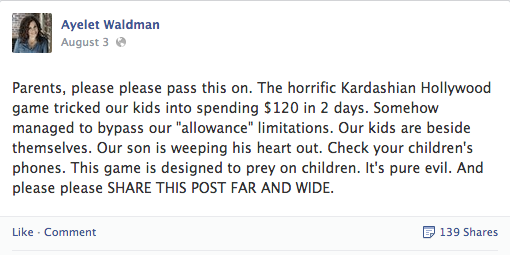 As we (and others) have found, it’s true that the game can easily make you spend money to earn “K stars” in your quest to achieve A-List status—one Jezebel editor even spent $500!—but we’d also say that we’re not sure a kid bypassing his allowance necessarily warrants this level of online rage.

Waldman herself, however, is no stranger to online controversy: Back in 2005, she penned an essay on loving her husband (author Michael Chabon) more than she loved her children which sparked such intense debate that she eventually wound up on “Oprah.” That said, we did derive a certain amount of guilty pleasure in seeing the crazy-popular game come under fire.

The good news is that Apple apparently refunded the charges one by one—so no harm to Waldman’s 11-year-old’s allowance. Another silver lining in the debacle, according to Waldman? Her kid really doesn’t like the Kardashians now.

Best thing about this disaster? My son fucking hates the Kardashians now.

Abe, age 11: Sobbing. “I hate those goddamn Kardashians.” Also? “I thought I was smarter than this.”