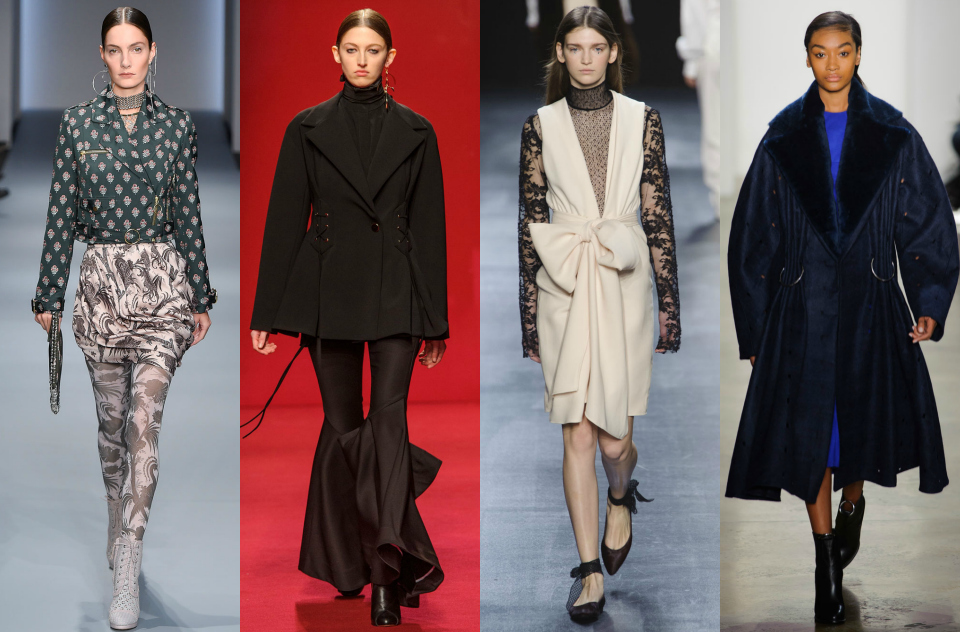 The monthlong fall fashion spectacle drew to a close in Paris on Wednesday, and the spotlight wasn’t only on next season’s big trends—shiny PVC, ruffles and pussy-bows among them—but a new guard of designers wowing the fashion world, many of which happen to hail from the land down under.

Right now practically every It-girl wants to add a piece of Ellery, Dion Lee, and Zimmermann to their wardrobe, all Aussie labels that show on international runways during Fashion Month and who are starting to set some serious trends, thanks to their undeniable talent, mixed with that quintessential Australian spirit; warm, energetic, and fashionably laid-back.

Just ask Eva Galambos, a Sydney buyer and retailer who’s attended the Paris collections for 15 years when Australian fashion was barely a blip on the radar. At Parlour X, Galambos’s high-end fashion boutique—considered Australia’s answer to Colette in Paris—local brands Ellery and Maticevski (also busy making a name for itself on the world stage) line the racks alongside the likes of Isabel Marant, Balenciaga, and Céline.

“[Australian] collections aren’t too heavy, we know how to have fun and inspire confidence, intrigue, and attitude,” says Galambos. “We also represent, an ideal, a dream, with our amazing lifestyle and positivity, which everyone wants to adopt especially now with all the talk of a global financial crisis and doom and gloom,” she added.

Because you’ll be seeing them everywhere soon, here are five Australian designers you need to know right now, and the Aussie editors who testify why you should believe the buzz. 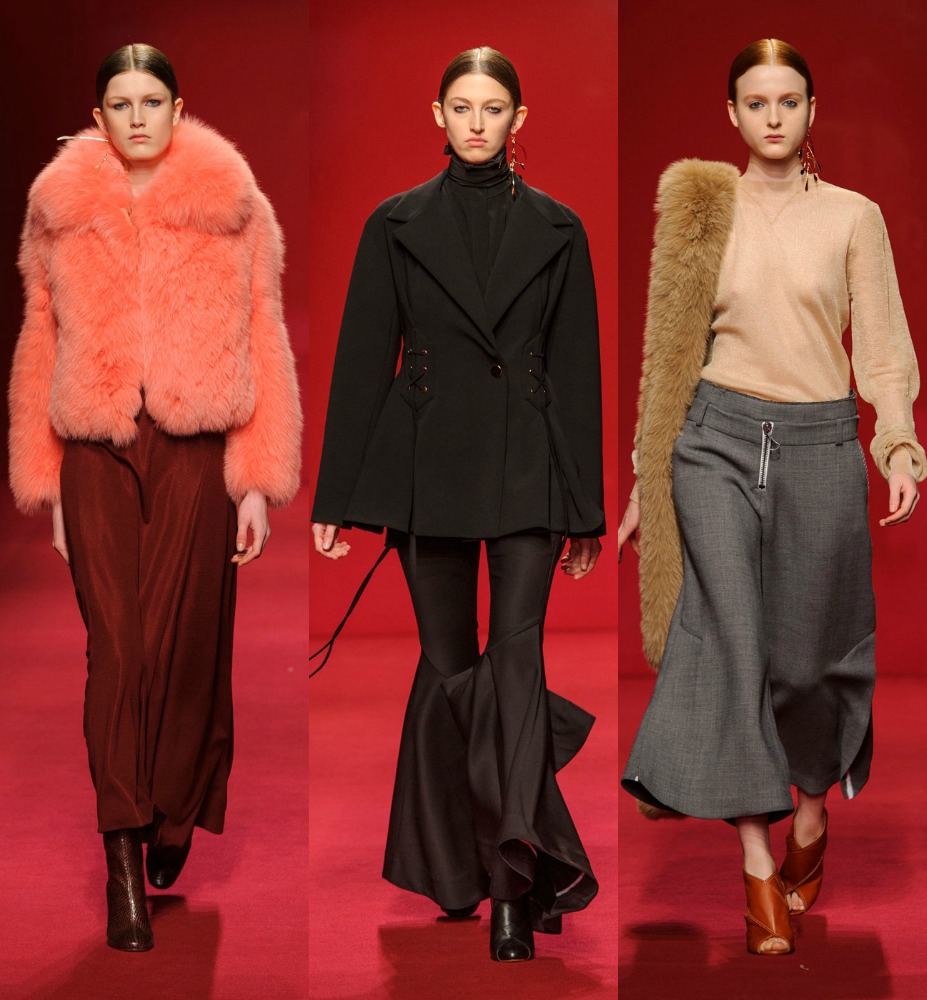 Story and signature:  The former receptionist turned stylist of fashion magazine Russh Australia, Ellery studied at a local fashion college and embarked on a short course at London’s Central Saint Martins before launching her Sydney-based label in 2007, which was an instant hit with the cool-girl crowd. Ellery’s structured yet relaxed signature, with its trademark super-flared pants, bell sleeves, and oversized mannish proportions, has proved a massive hit with the street-style set, as well as with A-listers such as Gwyneth Paltrow and Karlie Kloss. It’s only the third Australian label to be officially invited to show at Paris Fashion Week.

Fall 2016 collection:  “The collection explores the contrast between old and new. We wanted to unravel, deconstruct, and reconstruct pieces from another era, in new ways,” says Ellery of the turn-of-the-century-inspired range—it all started with the corset—of dresses, suiting, culottes, and exaggerated flared pants, which were served up in a luxe and heavily textured (there was plenty of fox fur, velvet, and lamé) palette of deep blacks, flesh tones, warm rusts, soft gray, and velvety blues—offset by pops of yellow and bubblegum pink.

Verdict: “Magnifique! Kym is clever and gifted, and it was a huge leap forward for the brand and its identity. Everyone wants to be the Ellery woman and own that look. She also debuted her first footwear, and there was no missing those thigh-high boots,” says Galambos. 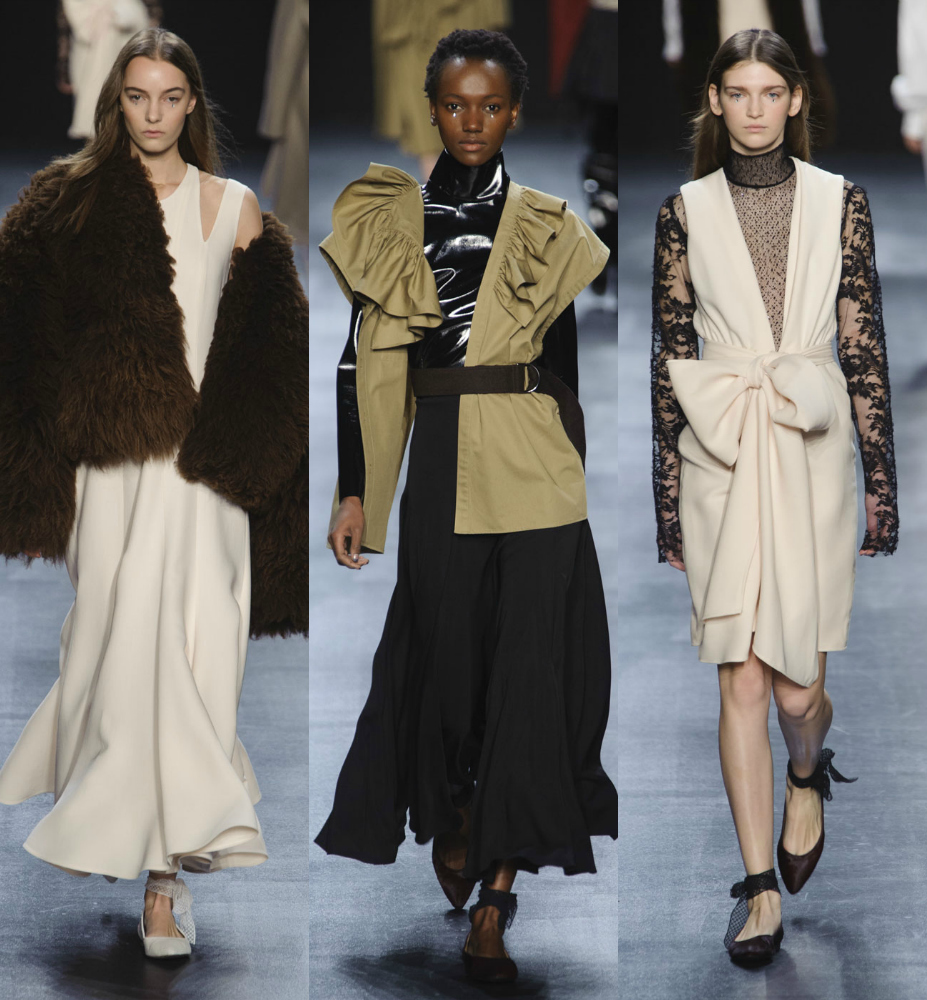 Story and signature:  The duo met while studying fashion design in their native Australia before taking on stints at Alberta Ferretti and Derek Lam. Deciding to call New York home, they launched Tome together in 2010 with a shared vision to create functional, uncomplicated clothing that respected the environment. Tome has gained steady momentum ever since, culminating in being named finalists in the CFDA/Vogue Fashion Fund in 2013, which naturally sent Anna knocking. With its arty sensibility—the pair looks to boundary-pushing artists for inspiration—and emphasis on sustainability, the clothing has an air of eras past meet modern deconstruction.

Fall 2016 collection:  Lobo said the range was designed to feel “light for heavy times” yet still evoke a confidence and boldness. The designers were thinking of independent feminist artists like sloganeer Barbara Kruger and the politically charged Lebanese-Palestinian Mona Hatoum, as well as old references they love of Annie Lennox and Vivienne Westwood. The result was a strong yet quirky assortment of trenches (one with an eye sketched on the back); cocoon coats; recycled, reworked denim and patchwork; and cozy touches of shearling.

Verdict: “Tome manages to offer beautiful pieces that elevate the basic with a hint of glamour,” said Glynis Nash, the fashion editor at The Australian Newspaper. “They seemed to be allowing themselves to have some fun with the latest collection, and I especially loved the grizzly-worthy shearling coats. 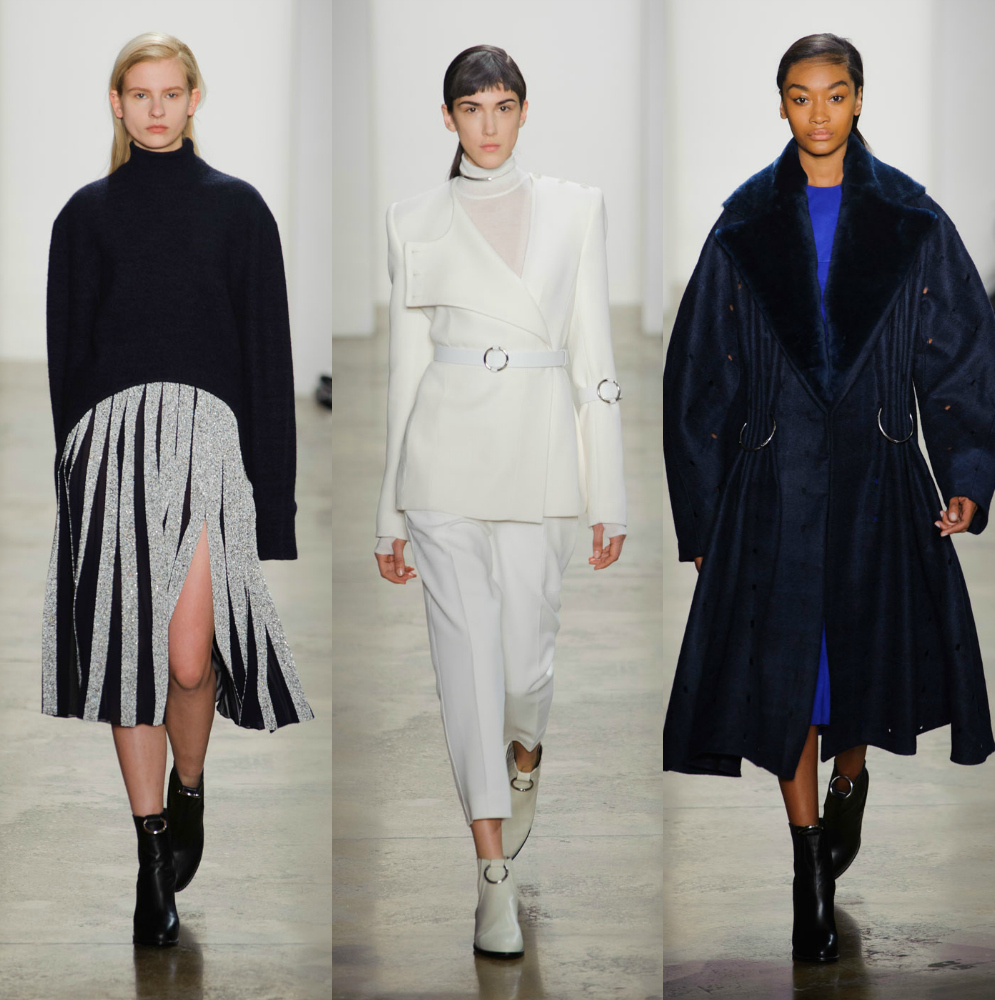 Story and signature:  Lee launched his collection in an underground parking garage at Australian Fashion Week in 2008 and immediately garnered the industry’s attention. Now a fixture during the New York shows, he continues to delight with his signature sculptured tailoring, modernist architectural approach, and penchant for experimenting with technological fabrications.

Fall 2016 collection: “I was thinking of a tougher character this season and wanted to return to a more sculpted tailored direction. There was more of a street influence and the idea of contrast between utility and embellishment, really decorative elements offset by quite masculine undertones,” said Lee of his latest offering, a highly wearable collection of his sharply tailored dresses and separates and sculpted silhouettes, which were offset with bullring-style hardware and flashes of crystals and metallic detailing, which was dubbed “a coming of age” by Vogue.com

Verdict: “Dion is never derivative, he’s a true designer and always pushing his own codes,” said Australian-born Jill Davison, U.S. Glamour’s fashion director. “It always feels very modern, which I love. I took away two things, one was that new mini length and then the rounded shoulder line. I also loved the piercing details and the eveningwear with the shine; it felt very fluid.” 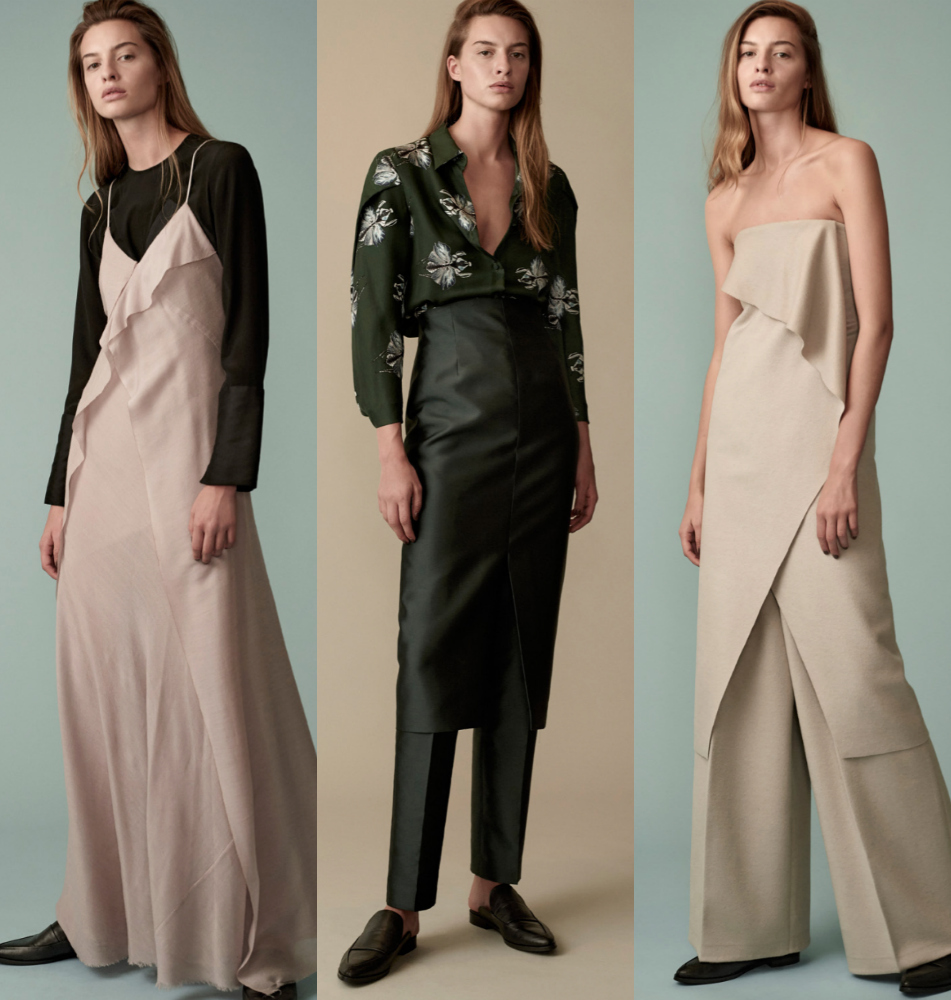 Story and signature: Spender, who won the 2015–2016 International Woolmark Prize regional final, is something of fashion royalty in her homeland: Her mother is Carla Zampatti, a long-established, highly influential designer. Spender, however, studied commerce before following in her mum’s footsteps, eventually working with French designer Martine Sitbon in Paris and then with her mother before going it alone in 2007. Known for her expertly tailored, deftly draped pieces and penchant for merino wool and luxe fabrics, her designs are modern, feminine, and almost have a mathematical sophistication.

Fall 2016 collection:  Spender presented her collection in Paris as part of the Australian Fashion Chamber Australian Designers Abroad initiative. Inspired by the wartime glamour that emerged in the 1940s and the feminine-meets-masculine suiting and aesthetic, “which was adopted by strong and powerful women of that time,” according to the designer; deep greens, camel, cream, and gilded gold prevailed on highly modern takes on suiting and separate wardrobe essentials.

Verdict: “Bianca’s clothes are beautifully tailored, sophisticated, and feminine—there’s a European sensibility to her collections, and she’s really having a moment,” says Thelma McQuillan, the fashion director at Harper’s Bazaar Australia. 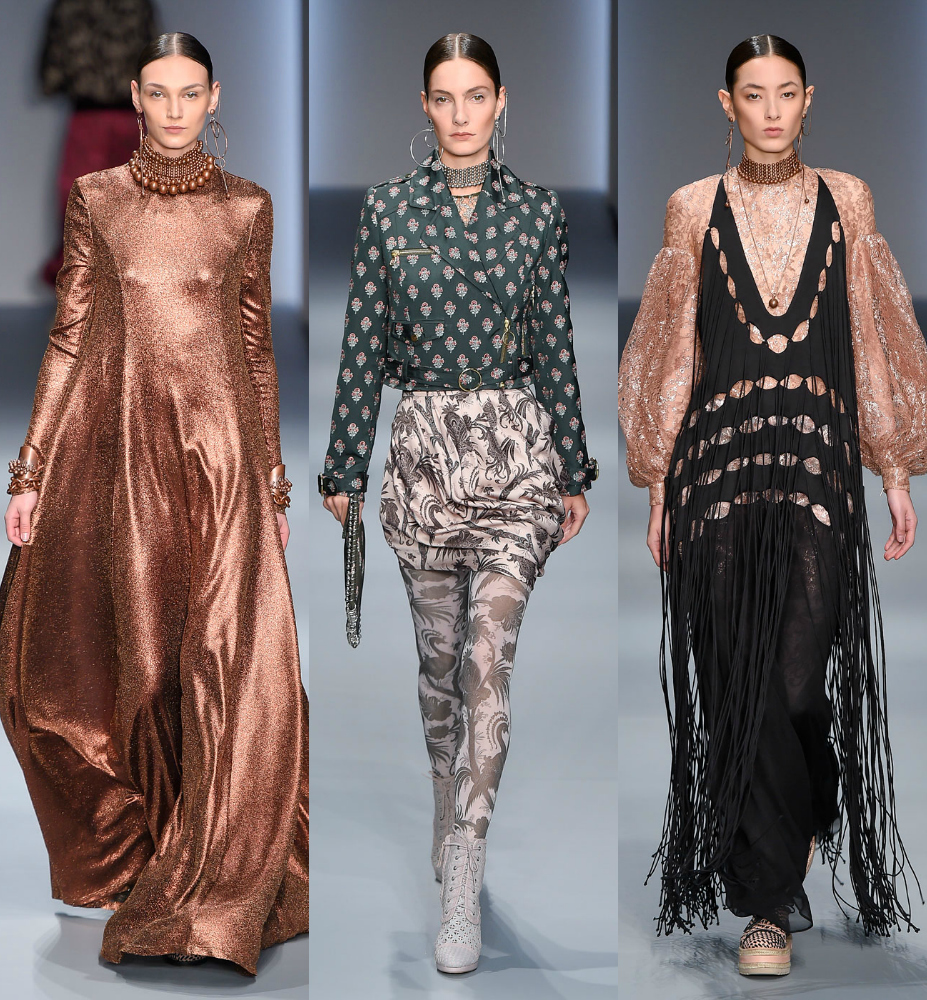 Story and signature:  Zimmermann founded her label, along with sister Simone who runs the business side, in the garage of her parents’ Sydney home back in 1991, and it has been growing steadily since. Inspired by the sun-filled, laid-back Aussie lifestyle, the label started off as a sexy swim-and-resort-wear line but is now a full-fledged fashion label and regular fixture at NYFW. Today the brand has 15 stores in Australia and two in the U.S. (L.A. and East Hampton) and an unmistakable signature, thanks to its delicate prints, boho silhouettes, and luxe fabrics that communicate a floaty, carefree vibe.

Fall 2016 collection: “I was inspired by a recent trip to India and all the colors and fabrics,” says Zimmermann of the rich and exotic range that was heavy on embellishment, clashing prints (some head to toe), and shimmery metallic shades of silver, pink, gold, and rust. As for the silhouette, it was soft and flowing, from the caftans to the pantsuits.

Verdict: “I’m never as patriotic as when going to a Zimmermann show. They are wonderful girls, and they make really good summer dresses,” says Australian-born Laura Brown, executive editor of U.S. Harper’s Bazaar.

Adds Aussie supermodel Jessica Hart: “First of all, they’re Australian, and I just love what they do, it’s so feminine, fun, and fresh. It’s really amazing that they started off as a swimwear brand and have made such an impact in fashion.”