Auli’i Cravalho, the voice of Disney’s Moana can clearly recall the first time she heard the movie’s anthem, “How Far I’ll Go.” “I remember the first time I heard the music was Phillipa Soo’s voice,” she tells StyleCaster. If that name rings a bell, it’s because Soo plays Eliza Hamilton in Lin-Manuel Miranda’s Hamilton. “And then the first time I was in the recording booth to record the song, Lin-Manuel was actually in his Hamilton get up,” Cravahlo reveals. “It was a really incredible experience and it definitely was an anthem for me during that time. I had a really, really sweet 16.”

It’s been four years since Moana was released, and it’s safe to say, we’re all waiting with bated breath for the announcement of a sequel. “I don’t know if there’s a sequel going on. I’m not even going to be cutesy or sly about it,” says Cravalho with a laugh. “I have no idea.”

But if a sequel or even a live-action film were announced, she would definitely be down to reprise her role. “I love my character,” she gushes. “She is such a beautiful heroine, so I would absolutely be happy to reprise her and also happy to see another young brown heroine reprise that role in a live-action version.”  More main character roles for brown girls? We love to see it. 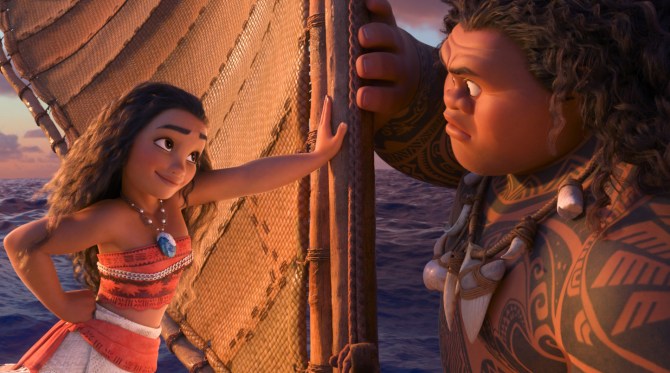 Like her character, Cravalho is willing to fight for what’s right and is using her social media platform to deliver messages of justice and equality to her followers. “I’ve been pretty transparent on social media about things that are important to me, she says. “This year is unlike any other. I kind of just read the room and I realized that staying silent on issues doesn’t do anyone any justice.” True that.

“I’ve been really lucky that I have really great friends and really great resources that I use to better educate myself,” she continues. “And I can use my platform to continue to educate others and share what I’ve learned. And I’m really grateful for that.” Cravalho knows the best way to be a force for change is through education.

“I’m so proud of my generation. I’m really proud of the people taking to the streets and speaking out on the things that are important to them,” she says with earnest. “And I am really excited for this election because I am excited for the young people getting to the polls.” Us too, girl, us too.

Cravalho is also using her platform for good by joining forces with King’s Hawaiian and No Kid Hungry to celebrate its 70th anniversary by supporting No Kid Hungry in a way that will provide half a million meals to kids in need. “It just felt really right because I love bread and I love King’s Hawaiian bread,” she says. “I think it’s so important that we tie organizations to charitable organizations as well and continue giving back into the community.”

Giving back, whether that be through charity or education, is clearly important to Cravalho, and it goes hand-in-hand with mental health awareness. Because to do our best work for others, we have to be kind to ourselves too. “There’s this song that goes, ‘I’m learning how to love you today,’ and  I just think that phrase itself is so important,” she explains. “Like what do I need in this particular moment?”

De-stigmatizing mental health is something Cravalho and her friends have welcomed with open arms. “Some of my best conversations with friends are like, oh, yeah, you’ll never guess what my therapist said the other day,” she sys. “It feels really good to have open communication like that.”

Cravalho is a big supporter of therapy, and loves being able to open up to her own therapist. “I think therapy in itself is kind of like having a Jiminy Cricket, like a third party that you can bounce back ideas off of,” A Disney princess through and through! “It only benefits you to be honest with yourself and honest with those around you.” Moana would be proud.