A warm, beautiful movie that stirs away from the usual clichés of African women and migrants, Atlantics is a marvel. It tells a wonderful, bittersweet coming-of-age story about a young woman learning to be comfortable with herself, her choices and her sexuality.

Mati Diop, the French-Senegalese actress turned director based her first feature, Atlantics, on a short film she made 10 years ago. Needless to say, it’s a passion project for her.

The movie begins in Senegal with Ada (played by Mame Binetou Sane). Ada is a young girl in love with Souleiman (Ibrahima Traoré). From the moment we meet them, the young couple’s dark skin is beautifully captured on camera against the riveting but dangerous sea. Their romance has a tenderness–a softness that is seldom represented on screen between Black people–darker hued Black people especially. Some filmmakers believe that Black bodies, particularly African bodies, only serve to carry trauma and pain. A myth has been perpetuated that love between Black people is something that must be a hardship when shown on screen–if it’s shown at all.

Souleiman is a poor construction worker who hasn’t been paid in months. He and his coworkers confront their corrupt property manager, who has hidden the money he owns them to no avail. Out of desperation, Souleiman decides to go to Europe by boat with a group of men to try his luck at having a better life.

Upon hearing the news, Ada is heartbroken but resigned. Determined to move forward she weds her wealthy but obnoxious fiancé. But on their wedding night, their house burns down. The rumor spreads that Souleiman has returned and is behind the arson.

Longing for her former lover, Ada looks for Souleiman in every street, and in every place where he used to frequent. On her quest to seek him out, she is tailed by a very determined policeman, Issa, (played by Amadou Mbow) who doesn’t believe Ada when she tells him she hasn’t seen her lover since he left. 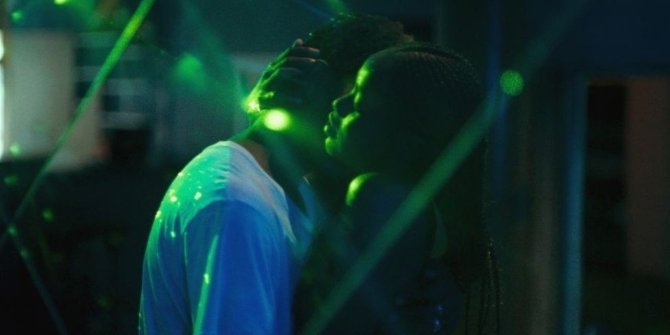 Ada’s longing is heart-breaking and so is the grief the women in her community are dealing with. The men have gone to a foreign land in search of work, but the women don’t know why they’ve been abandoned. They haven’t heard from their loved ones, and are terrified and anxious about their fate. The sea has devoured their men and hopes. It looms in the background, becoming an obsession for Ada.

In addition to searching for Souleiman, Ada is also dealing with the terrible pressures of the society she lives in. Her husband’s family forces her to do a virginity test upon hearing the news of Souleiman’s return, to make sure she is not bringing any “shame” to them.

One of the pitfalls the film could have easily fallen into would have been showing the men’s journey to Europe and their struggle. Western films have a morbid fascination with depicting Africans doomed to a terrible fate, stuck between staying in the motherland and dying of poverty, or risking everything to go to Europe and suffering the harsh, terrible reality of potentially dying at sea or, becoming “refugees” in a foreign land.  However, Atlantics is a truly unique film because it has compassion for Senegalese people and shows them for what they are–human beings.

The film also turns into a wonder of magical realism. The ending is poetic–and a reminder that at its core, Atlantiques is a coming-of-age movie about a young woman who defies her parents’ expectations, and decides to live her life the way she intends to.

With Atlantics, Senegalese girls and to a broader extent, African girls have the chance to see themselves growing up and maturing into women on screen in a non-sexual or violent way. And that’s what makes the film so important.