Ashley Graham may be one of the most in-demand faces in fashion, but the 29-year-old model and body-positive activist recently revealed in the latest issue of V Magazine the tribulations she’s faced, and how she ultimately came to love herself and her body. The interview, conducted by Tracee Ellis Ross, appeared alongside a striking series of photos shot by Mario Sorrenti, in which Graham appears nude.

“It would be so much easier to be like, ‘This is the date, time, and experience I had,’ but there really isn’t one. It was more about experiences in my life of devaluing the fact that I was an average, normal girl living in the city. But being told, ‘You’re fat,’ ‘You’re ugly’ or ‘You’re just not good enough,’ and trying to live in these model standards, that was my normal,” she said. “I think I hit bottom around 18. I was disgusted with myself and told my mom I was coming home. And she told me, ‘No, you’re not, because you told me that this was what you wanted and I know you’re supposed to do this. It doesn’t matter what you think about your body, because your body is supposed to change somebody’s life.’ To this day that sticks with me because I’m here today and I feel that it’s okay to have cellulite.” 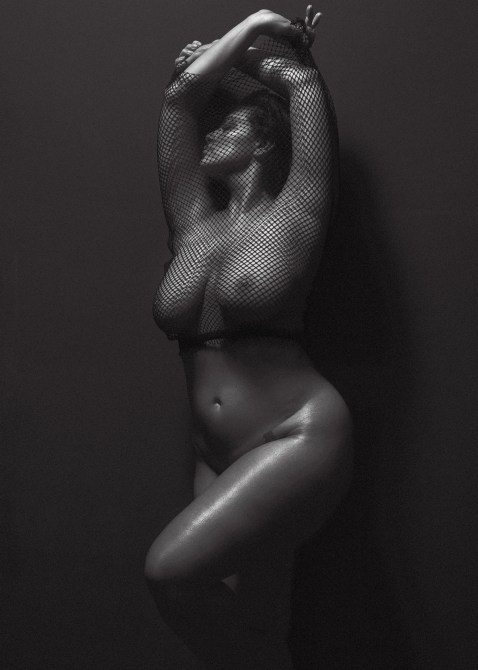 Graham elaborated on just how she came to terms with her cellulite: “I remember my first signs of cellulite, in middle school. I remember telling my mom, ‘Isn’t it disgusting? It’s so ugly.’ She pulled her pants down and said, ‘Look, I have it, too.’ And I was like, ‘Gasp!’ She looked at me, then at it, and just rolled her eyes. She didn’t tell me that it’s beautiful or ugly. She just made it a nonissue. It doesn’t define my worth. If women like you and me continue to preach that, then I feel like younger girls are going to grasp it and they’re going to be like, ‘Who cares!’

Graham also discussed the power of words and how self-affirmations can have an impact. “If you say, ‘I’m fat,’ that’s how you’re going to feel. If you say, ‘I’m stupid,’ that’s how you’re going to start your day. I wake up sometimes and I feel like the fattest person alive, but I’m not going to let that affect the rest of my day. Say to yourself, ‘I like this day. I am bold, I am beautiful, and I am brilliant.’ For me, that hits the interior, the exterior, and it makes me feel smart.”

A model and a role-model. We like you, Ashley Graham.

MORE: Ashley Graham Says Ex-Boyfriends Have Left Her Over Her Weight, Called Her ‘Too Fat’