The 91st Academy Awards was a subtle, if slightly underwhelming night, of celebration. A few standouts included Olivia Colman’s heart-warming and utterly adorable acceptance speech for Best Actress . But fans are of course asking, who won the most awkward award for the 2019 Oscars? Ashley Graham for a racist comment to Jason Momoa.

While interviewing Momoa on the red carpet, Graham asked the Aquaman actor to perform the Haka, a traditional dance developed by the indigenous Maori population.  New Zealand’s official tourism website calls the Haka, “A type of ancient Maori war dance traditionally used on the battlefield, as well as when groups came together in peace.”

Because of its the Haka’s cultural roots, many Twitter users criticized Graham for Momoa to perform it, as if it was the “latest dance craze.” Many also slammed the model for imitating the dance itself. Though the Haka is indigenous to New Zealand, it originated from Eastern Polynesian culture ,and Momoa is from Hawaii—part of the Polynesian triangle.

Still, others pointed out that there was nothing wrong with Graham asking him to do a Haka move because the actor performed almost the entire ceremony at the premiere of Aquaman. However, others clapped back, explaining that the Aquaman performance was Momoa’s choice. He wasn’t forced into doing it. Furthermore, the film incorporates many aspects of the New Zealand culture in its story.

Momoa’s wife, Lisa Bonet, has also been praised for stepping in and shutting down Graham when she made the request. Though her words are inaudible, it’s clear from her body language that she wanted Graham to stop asking about the Haka and didn’t want her husband performing a cultural dance in the middle of the red carpet.”I gotta get a Haka move,” Graham joked, beginning to dance and bounce, “Like, one Haka move, come on!” This prompted a Twitter user to write, “Omg @ashleygraham got shut down! Go Lisa Bonet having her husband’s back.”

Here is the moment where Bonet attemped to shut down the conversation, but as you can see, Graham is still making strong eye contact with Momoa, clearly missing Bonet’s hints. 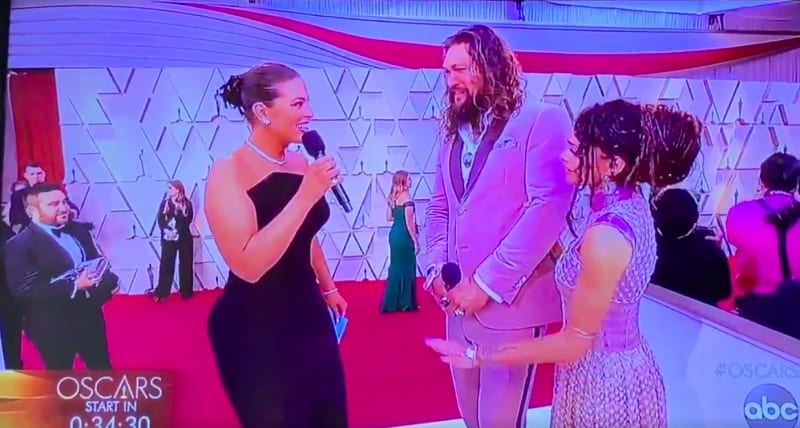 Graham ultimately succeeded in getting Momoa to do one move from the dance. He stuck out his tongue, which Graham imitated by also sticking her tongue out at the camera. “Cringeworthy” and “awkward” have been common words used on Twitter to describe the exchange.

HAS to go to Ashley Graham getting SHUTTDOWN by Lisa Bonet when she asked Jason to do a tribal yell. Yikes.

“Ashley Graham asking Jason Momoa to do the Haka at the Oscars irked me so much.
“Oh hello ethnic person, do your ethnic tribal funny dance for us on the red carpet.’
I’m glad my sister-wife intervened. She wasn’t having it.”

“That is….horrible. Why do white people always want poc to *perform* their culture for them as entertainment? It’s gross.”

“Lisa is such a protective alpha though I love it,” a Twitter user added.

“Lisa was quietly like nah fam, not tonight,” one replied.

Many users were appreciative of Bonet.

“Lisa Bonet did not have time for Ashley Graham tonight. #Oscars2019Live”

“lisa bonet is a forever favorite for putting her hand up and politely but firmly saying NO to ashley graham when she asked jason momoa to dance for her during their red carpet interview. that’s protecting your partner. #Oscars

Suffice to say, Twitter was less than pleased with Graham’s request. Below is a video of when Momoa performed at Aquaman. Variety’s Mark Malkin was there to capture the performance:

And now… in case you need a palette cleanser after all of this, please enjoy Olivia Colman’s Oscar acceptance speech for her role in The Favourite. She not only became our favorite person of all time in those three minutes, but she also won the entire crowd over with her charm and adorable bumbling. Her awe in sharing the nomination with Glenn Close and Lady Gaga is heart-melting. That’s all.