YouTube star Nikkie de Jager just had one of her favorite people on her show. Jager was giddy as she chatted with one of her all-time heroes. Ashley Graham, who shared she was fat-shamed by a stylist last year, was very open in discussing the challenges that come with being in an industry full of, and dominated by, thin people. The two women were bonding over being plus-size in two very creative industries—which also means they are often very difficult industries.

Graham explains that, despite her status in the fashion industry, she still gets fat-shamed. Not OK. “The end of last year, I had a stylist and I couldn’t fit into these pants,” Graham explained as Jager did her makeup. “[The stylist] smacked the side of my thighs and she said, ‘Ashley if you just got rid of that right there, you would be able to fit into these pants.'” UM—excuse me? Isn’t the point of a stylist to find clothes to fit you rather than the other way around?

Graham continued, saying she hopes to see the fashion and beauty industries evolve into something better.

“What I really want to see is that we don’t have to have this conversation [about] diversity, that it’s already there,” she said. “Because that’s how the world is. We are all created so differently. We need to be able to embrace that and have this natural conversation around it instead of saying, ‘Oh, there’s a big girl in a magazine,’ or ‘Oh, we’ve got our black people,’ or ‘Oh, we have to make sure we include all gender.’ It’s like, just include everybody. At the end of the day, that’s just it.” 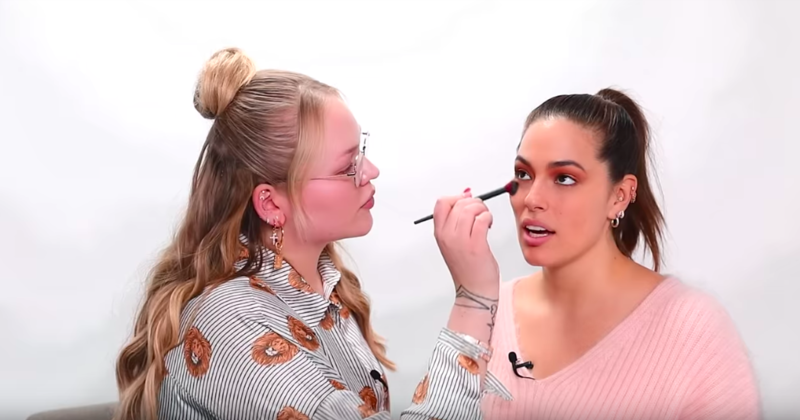 Words to live by. In fact, To All The Boys I Loved Before actress Lana Condor shared a similar sentiment with ELLE Canada. The 21-year-old, who struggled with her own negative body issues for a while, said she doesn’t understand why women look at their imperfections in a negative light because that’s exactly what makes them unique.

Jager asked Graham how she handled the stylist— what did she say back? Graham said the worst part about the situation was that the stylist made her snarky comment in front of a room full of skinny models. But Graham stood her ground.

“OK, look. You know that first of all, I’m not going to lose weight to fit into a pair of pants,” the 31-year-old model told the stylist. “And second of all, you know who I am. I’m not about conforming to people like you.”

The stylist then apparently told Graham that she was “just joking.”

“That’s not ‘just joking,'” de Jager replied to Graham. And Graham agreed, saying one of the models pulled Graham aside later to say she appreciated her standing up for herself. “One of the [the other models] came up to me and said, ‘Hey, I just want to let you know I appreciate you standing up for yourself,'” Graham told de Jager. It was probably inspiring for another woman to see and something she needed in that moment, almost as much as Graham.

Here’s a sweet moment from her time with Jager that Graham shared on Instagram yesterday. “Sang our way through a makeup tutorial you don’t want to miss! @nikkietutorials did my makeup and I’m fangirling over here 💋 link in bio to watch the full video,” the model wrote.

“I don’t work out to lose weight, I don’t work out because I want to be thin, I work out to stay healthy, strong, firm and to keep my mind clear. #nationalworkoutbuddyday thank you @kirastokesfit for kicking my ass!” Graham shared this video last week You go, girl!