Ashley Benson is one to keep it real. Minutes into our phone conversation, Benson, on her way to a workout in New York City, pauses mid-story to apologize for an ambulance siren in the background, casually mentioning that there’s a fire. “Sorry—I’m walking to a workout and there’s a huge fire,” she says.

She’s not afraid to swear when describing eyewear, and when talking about “Pretty Little Liars,” the Freeform teen-mystery she acted on for seven seasons, Benson has no qualms with airing her grievances, including a Photoshopped promotional poster snafu and an emotionally draining social media campaign.

When you’re always on social media, you’re living in this fake life.

Benson’s commitment to keeping things down to earth is likely why she partnered with Privé Reveaux, a line of $29 designer-like sunglasses, with which she recently launched her second collaboration, the Icon Collection. (Naturally, her favorite pair from the line are mirrored ’60s-esque shades named The Benz, aptly titled after her last name.)

But beyond her affinity for low-cost sunglasses, Benson’s relatability stretches to more serious issues too, such as body-image pressures and the stress of looking picture-perfect on social media. 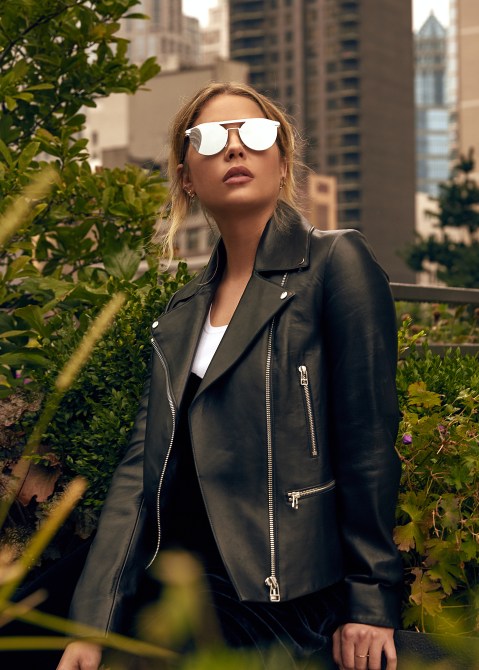 Since ending her run on “PLL,” in which she played Hanna Marin, a body-conscious high schooler plagued by several serial stalkers, Benson’s relationship with social media has taken a complete 180. Once an avid Snapchat and Instagram user, where she communicated with fans and promoted her show, Benson has taken a recent social media break to detox from the “fake life” that used to consume her.

“To be honest, I don’t use social media a lot anymore. I Instagram sometimes, but I don’t really go on it,” Benson says. “When I was on the show, we really had to be heavily into Instagram and Snapchat and whatever. I felt like it was taking up a lot of my time. I feel like when you’re always on social media, you’re living in this fake life. I’d rather just not look and enjoy my time.”

I don’t think it should matter, the pressure of being a size zero, because everyone is talented.

Benson’s point of view on social media is why she urges her fans to take what they see on their phone screens with a major grain of salt. She recalled a time during the first season of “PLL,” when she was surprised to pull up her Instagram to see a promotional poster of her and her castmates’ bodies and faces drastically Photoshopped.

“‘PLL’ had put up this poster and it was from our first season and it was completely crazy. Nobody looked like themselves,” Benson says. “Even for magazine covers, they’ll Photoshop out a mole, make your boobs bigger or your waist four sizes smaller, and you’re like, ‘That’s not even me.’ You never know how it’s going to turn out because you have no control and you’re not editing the photos, but it sucks when you’re like, ‘Wow. That’s a completely different person.’” 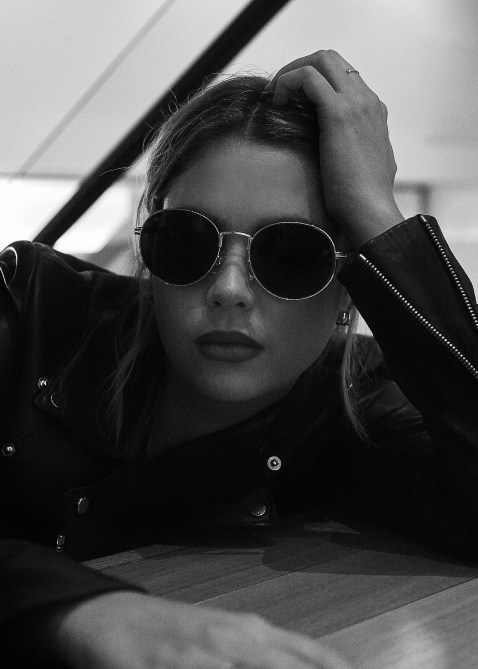 Given her experience with Photoshop, Benson is careful to remind photographers not to alter her body. And though she admits she’s asked for small touch-ups in the past, for the most part, she doesn’t. And she’s refreshingly transparent about the rampant Photoshopping in the industry, regardless of her requests, and how image-altering isn’t the only component that may present an unrealistic standard of beauty.

“I always make sure to tell people, with any shit that I do or anyone else does, that unless it’s announced that it’s not Photoshopped, it’s Photoshopped,” Benson says. “And don’t get down on yourself for not looking a certain way because it takes a lot of hair and makeup, a ton of good lighting, and after the shoot, it’s all this editing.”

For magazine covers, they’ll make your boobs bigger or your waist four sizes smaller, and you’re like, ‘That’s not even me.’

Benson’s passionate stance on body image might be because of the shaming she experienced in her early career. In a 2016 interview with Ocean Drive, Benson revealed that she cried for 30 minutes after she was told that she was “too fat” for a role, despite being a size two. And though she admits she still sees body-shaming comments on social media, she sees body diversity in Hollywood steadily improving.

“I hate that people still make those comments,” Benson says. “I don’t think it should matter, the pressure of being a size zero, because everyone is talented. Everyone deserves a chance and the weight thing is too much pressure to put on anyone.”

MORE: How Mandy Moore Keeps It Real in the Face of Instagram Trolls and Hollywood Pressures

Another issue Benson takes with the entertainment industry is the lack of diverse roles for women. As someone who started acting when she was 5, Benson has seen a lot of scripts come by, though she’s still haunted by the same “pointless fillers for men.”

“Women don’t really have a lot of good lead roles. There’s always some weird storyline with them,” Benson says. “Half of the movie roles they bring me, I don’t even want to play this person. I don’t want to play a role like this because it’s not uplifting. It’s not positive. They’re just pointless fillers for men. I hope that it’s not always about a guy and it can be about a woman, but I mean, we’ll see.”

It’s an amazing time for women right now where we’re all coming together and standing up for one another.

However, with the record-breaking success of Patty Jenkins’s “Wonder Woman” and the palpable sense of community Benson feels with other actresses amid Harvey Weinstein’s ongoing sexual harassment scandal, Benson is confident that Hollywood’s treatment of women will change for the better.

“I’m glad that people are now speaking up and being supported,” Benson says. “I think it’s a very important time and an amazing time for women right now where we’re all coming together and standing up for one another. Hopefully, with everything going on, we can try to change things.”