There are still occasions when Ashleigh Murray finds it hard to resist projecting her own personality onto Josie McCoy, the aspiring singer she has played for four years on The CW’s Riverdale and Katy Keene. “There are moments I have to remind myself, ‘You can’t argue if it doesn’t make sense for you. You can’t try to turn it around and make her stronger in this moment,’” she tells StyleCaster

One example of this feeling is when Josie confronted her archnemesis—the rich, sultry and endlessly devious Alexandra “Xandra” Cabot (Camille Hyde)—in the first season of Katy Keene for stealing and performing her music—again. “Josie confronts Xandra again and in that moment, Xandra flips the script,” Murray says. That is, Xandra tried to deflect the issue at hand and ignore Josie’s concerns. Josie falls for it but Murray didn’t. “I was just struggling,” Murray says. “Ashleigh was like, I don’t give a damn about Alex right now. Don’t try to sidestep the conversation!”

As fans know, Murray’s first three seasons playing Josie were spent on  Riverdale, which Katy Keene was a spinoff of. Both shows are based on Archie Comics characters.

Big city temptations and moral quandaries abound Katy Keene, a funky, sexy dramedy about a group of ambitious New York City twenty-somethings thirsty for success in fashion, acting and music. Lucy Hale, who plays the titular character and whose crossover stint in Riverdale’s most recent season, acted as the backdoor pilot for Katy Keene. 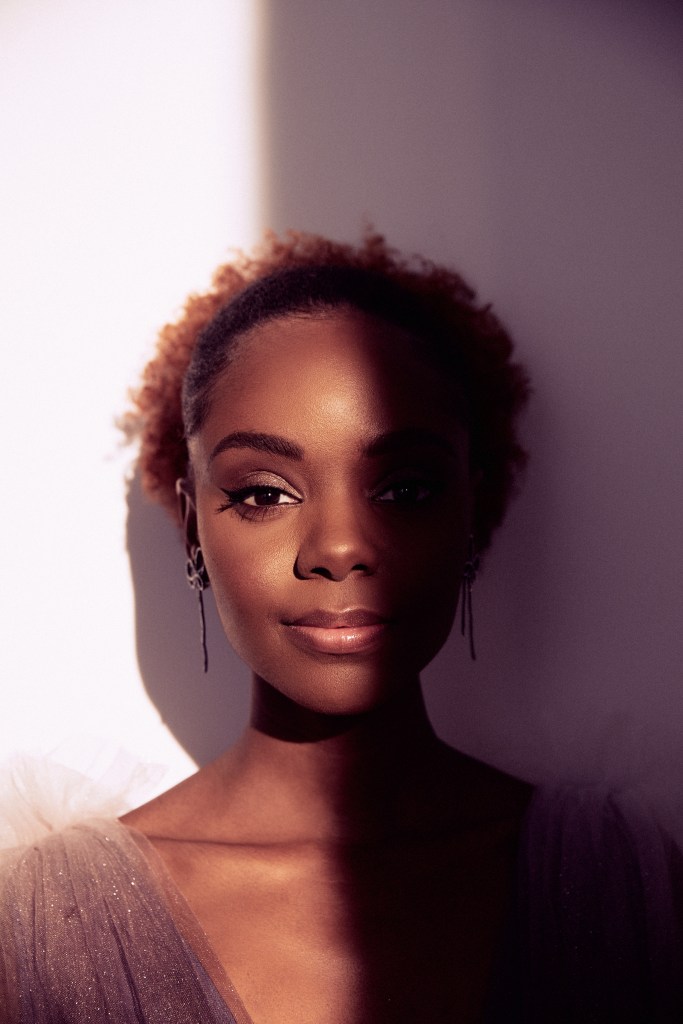 “I don’t have the same love for singing and the strength and courage as Josie to make her music. In real life, it’s still one of the scariest things that I haven’t quite overcome,” says Murray, who does all the singing for Josie. “Josie is all about music. I’m not really there.” However, when it comes to acting, it’s a different story. “I’m pretty courageous when it comes to my work as an actor,” Murray says. “There are moments where I’m still really scared and nervous and anxious, which I suppose is a good thing since it shows I still care about what I do.”

Katy Keene has had three characters from Riverdale cross over, and Murray thinks it would be easy to have others guest star as well. “I feel like the writers could justify anyone taking a trip to New York. I would love having Kevin (Casey Cott) in New York. I feel like it makes sense for his character,” she says

One of the things that I identify with most in Josie is that strength.

Robin Givens, who played Riverdale’s mayor and Josie’s mother on Riverdale for three years, has also guested on Katy Keene. “I would love to have Josie’s mom back just to continue to give more of a backstory to Josie, and her life and her family,” Murray says

The juxtaposition between Josie’s small hometown of Riverdale and her new home in New York City on Katy Keene provides a lot of dramatic potential for Murray’s character. It also somewhat mirrors Murray’s real-life move from Kansas City, Missouri, to New York when she first started to pursue a career in acting about 12 years ago.

Like her, Murray also wants to see Josie navigate the challenges of adjusting to life in a metropolis.. “I would actually love that. I would love the audience to actually witness the struggles that she has; to see Josie really experience what it means to be the small fish in a big pond. To see that even though the viewers might recognize her wonderful talent and that she deserves success, to see her just hitting a wall and that pain really live in her.”

Upon arrival, Josie famously declares that the Big Apple would be a piece of cake after having lived in Riverdale, where homicide was as common as a Friday night football game. It’s not too hard though, to imagine that Josie’s bravado masks some very understandable trauma.

Without a doubt, Josie McCoy is a strong person. However, Murray agrees portraying lingering effects from a life full of tragedy could add depth and complexity to Josie’s strength. “It would definitely be a challenge for me, because one of the things that I identify with most in Josie is that strength. But we never really saw fully how Josie was affected by any of the goings on in Riverdale,” she says. “A lot of stuff kind of happened around her so I think it would be interesting to see her deal with it in the face of her friends and family. Like hey, maybe you’re this strong able-bodied person who can go through anything just because you’re from Riverdale or maybe, not so much.”

Fans of Josie from her Riverdale days will be happy to know that not only has Josie been much more integrated onto the canvas of Katy Keene, the character has also grown, something somewhat lacking from her Riverdale storylines. In episode 10, for example, Josie reconstitutes her band, Josie and The Pussycats, with two new members: Cricket (Azriel Crews) and Trula (Emily Rafala). Josie’s old controlling ways start reappearing and she suffers the expected negative consequences. This time, however, Josie chooses to change to accommodate her band members’ concerns instead of shutting them down. Growth!

Like Josie, Murray is also sometimes assertive about the work she puts out. “I have a pretty strong team and we’re very open and communicative, and I trust them,” she says. “When it comes to being on the set and creating, I feel like that’s when things get a little different because I’ve been the character for so many years. I’d like to try to keep her on the right path. And continue with some fluidity of growth.”

I felt like it shouldn’t be the same old Josie.

She specifies that episode 10 was one of those instances she spoke up. “We were talking about how Josie didn’t want to be this way but then she’s still [written as] doing these things,” Murray says “I felt like it shouldn’t be the same old Josie, like we can update it. I feel good knowing I at least have the strength to speak my mind, and to work in an environment where I’m heard.”

Early in the season, viewers learned about Josie’s wealthy boyfriend/manager Alex (Lucien Laviscount)’s substance abuse issues, which, at the time of their meet cute in Washington Square Park in Katy Keene’s premiere episode, he had put behind him. Later in the season though, it seemed like Alex had relapsed.

Josie, whose father also had issues with alcoholism, confronted Alex. Murray is proud of the way Josie and Katy Keene handled Alex’s addiction. “She handled it as best she could. Being a young twenty-something, who knows what sort of behaviors come along with that when you love somebody who is afflicted in that way,” she says. “She was comfortable enough to talk to him and to help him get the help he needed.”

I feel good knowing I at least have the strength to speak my mind.

Murray agreed that Josie’s choice to stay with Alex may have had to do with her own unresolved issues with her father. “Maybe the issue with Alex drinking, and her experience with her relationship with her father could have informed her reason why she wanted to stay with him,” she says. “Maybe she thought she couldn’t help her dad, but maybe she could help Alex and that it would be really wonderful for both of them.”

Riverdale is known for long shoot days Vancouver Katy Keene, which films in New York City, isn’t any different. Aside from the pilot, which was shot in the Brooklyn Navy Yards, Katy Keene’s interiors are shot in Silvercup Studios in Queens. Because the mood, vibe and personality of New York City is so much a part of the show, Katy Keene also shoots a good number of scenes on location. The logistics that come with everything can make for longer days. “It can be a lot,” says Murray. “When we were shooting the polar vortex episode, I felt like it was literally Groundhog Day; in the same outfit, for hours and hours never seeing the light of day. She laughs as she recalls the week: “There were times where we’d walk in at four in the morning and we’d be getting our hair and makeup done. And then we’d be leaving after midnight.”

One of the many charms about Katy Keene is its dynamic musical numbers. As much as she loves doing them, the musical numbers also extend Murray’s already long filming days. “The days are long enough as it is if you only had to come in and speak. Trying to fit in musical numbers that also might entail dancing, is very hard.” she says. 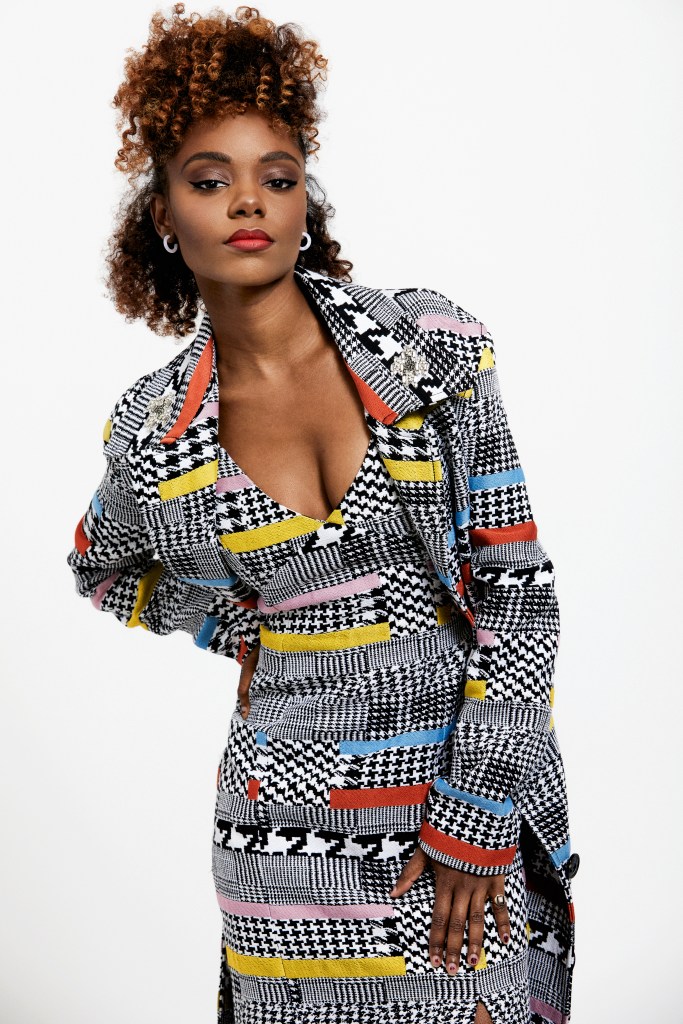 And Katy Keene doesn’t do things halfway. There is always also some choreography. “I have to go home and rehearse dance moves too,” Murray says. “It’s just very, very rigorous; Very intense.”

On the flip side, starring in a show that integrates music and dance opens up possibilities for potential big guest stars, and Murray’s recent binge of the 2000s legal dramedy Ally McBeal has given her ideas. “The characters all hung out at this bar afterwards downstairs from their law firm,” she explains. “And they always had these live musical numbers where real musical artists came on like Barry White and Macy Gray. There were so many different musical acts on there and I loved that. I was like, ‘That’s what I need’. It could be anybody. It could be Kehlani; it could be Tina Turner. Just bring everybody!”