Ever since Kanye West accused A$AP Rocky of sleeping with designer, Yoon Ahn, fans have had one question on their minds: Did A$AP Rocky cheat on Rihanna?

A$AP and Rihanna met in 2012 after A$AP was featured on Rihanna’s song, “Cockiness (Love It).” They remained friends for years—A$AP even opened for Rihanna’s Diamonds World Tour in 2013—before news broke of their romantic relationship in January 2020, just weeks after Rihanna’s split from her then-boyfriend, entrepreneur Hassan Jameel. Rihanna and A$AP confirmed their relationship in December 2020 after they were photographed holding hands while walking around New York City.

In January 2022, news broke that Rihanna and A$AP were expecting their first child together after the Fenty Beauty founder was photographed in New York City showing off her baby bump in a pink puffer coat, ripped faded jeans and body jewelry, alongside her beau. The A$AP and Rihanna welcomed their first child, a son, in May 2022.

“Rihanna is doing well,” a source told People at the time. “They are very excited to be parents. Rihanna is already a wonderful mom.” In an interview with Vogue in 2022 before the birth of her son, Rihanna revealed that she wasn’t planning to have a child. “I don’t know when I ovulate or any of that type of shit. We just had fun,” she said at the time. “And then it was just there on the test. I didn’t waste any time. I called him inside and showed him. Then I was in the doctor’s office the next morning and our journey began.” While Rihanna confessed that she “always thought” her life “would be marriage first, then a baby,” she also told Vogue, “Who the fuck says it has to be that way? I’m certainly not gonna let that get in the way of me being a mom.”

Five months after the birth of A$AP and Rihanna’s son, Kanye accused A$AP of having sex with another woman. So did A$AP Rocky cheat on Rihanna? Read on for what we know.

Did A$AP Rocky cheat on Rihanna? 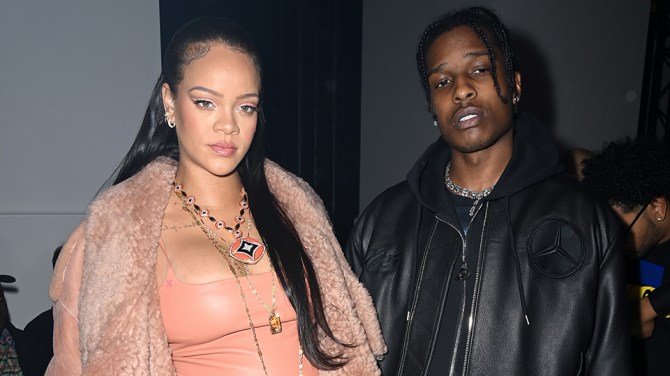 Did A$AP Rocky cheat on Rihanna? Kanye West accused A$AP of having sex with someone named “Yoon” in a since-deleted Instagram post on October 6, 2022. “Ambush weak. Rocky fucked Yoon. Next,” Kanye wrote. Fans believe “Yoon” is Yoon Ahn, a fashion designer who is the founder of the fashion brand, Ambush Designs, which Kanye also referenced in his post. ( Kanye is also credited for popularizing Ambush after he wore the brand’s now-famous “POW!” pendant necklace in the late 2000s.) Yoon responded to Kanye’s accusation in an Instagram Story on October 7, 2022. “Not only using false sex accusation, spreading that lie in the name of God to insult a woman is lowest of the lowest,” she wrote. She also added a Bible verse at the bottom of the post: “Be aware of false prophets-Matthew 7:15.”

Kanye’s claim also came after rumors in April 2022 that A$AP cheated on Rihanna with shoe designer, Amina Muaddi, who worked as a designer for Rihanna’s brand Fenty, according to TMZ. A source close to A$AP and Rihanna denied the rumors at the time. ,100% false on both counts,” the insider said. “1 million percent not true. They’re fine.” Amina also denied the rumors, calling the claims “malicious,” given Rihanna’s pregnancy with her and A$AP’s first child at the time.

“I’ve always believed that an unfounded lie spread on social media doesn’t deserve any response or clarification, especially one that is so vile. I initially assumed that this fake gossip – fabricated with such malicious intent – would not be taken seriously, she wrote on her Instagram Story at the time. “However in the last 24h I’ve been reminded that we live in a society that is so quick to speak on topics regardless of factual basis and that nothing is off limits. Not even during what should be one of the most beautiful and celebrated times in one’s life.” She continued, “Therefore I have to speak up as this is not only directed towards me but it is related to people I have a great amount of respect and affection for. While Rih is continuing to live her serene, best dressed pregnancy life and I go back to my business – I wish everyone a beautiful Easter weekend!”

Who is Yoon Ahn?

Who is Yoon Ahn? Yoon is a fashion designer and founder and creative director of the brand Ambush. She is also the jewelry design director of Dior Homme. She was born on November 21, 1976 and graduated from Boston University. She lives in Tokyo, Japan, with her husband, rapper Verbal. Yoon founded her brand, Ambush Design Company, in 2002. The company started as a creative design firm where Yoon designed original album covers for her husband and other artists. Ambush made its official debut as a fashion brand in 2008 after it gained international recognition for its now-famous POW!” pendant necklace, which was born by Kanye West and other celebrities. In 2015, Yoon and Verbal were named on Business of Fashion’s list of the Top 500 People Influencing the Fashion Industry. In 2016, Yoon opened Ambush’s first flagship store in Tokyo.

In an interview with High Snobiety in 2022, Yoon explained how more men are wearing jewelry as a result of hip-hop culture. “Hip-hop and pop culture definitely influenced that. Customizing your own pieces becomes like your own ID, and especially guys want to be able to bring that whole persona to the front and decorate themselves,” she said. “I love that rappers really helped and opened that door where guys can feel more comfortable in their own skin. And it’s not just about jewelry, either. It’s about hygiene, hair, even down to manicures. They’re really feeling themselves. But now I’m glad to see that music and fashion are allowing people to just act as they are, no longer bound by all these unwritten social rules.”

She added, “Man, there’s so many guys now, everyone is getting iced up. You don’t even know if they’re real gold, it could be silver, it could be 10k, [but] as long as it’s shiny I think it’s okay. I can tell who’s really into jewelry by what kind of stone they’ve purchased. So it was fun looking at Lil Uzi having pink diamonds. I love Pharrell’s real stone necklaces, those for me have more weight to them. If you really want to flaunt having money, get a good stone. Don’t try to front with some iced-out thing that everyone can get from the mall.”

Yoon also revealed the advice she would give another designer starting their brand. “Have consistency in the output. It’s easy to be swayed by a big reaction on social media, but those are fleeting moments, and your work is only as good as the last thing you put out,” she said. “Just remember that if starting a brand is something that you’re going to commit to doing, it has to really be something that’s worthwhile, that people can hold onto and find value in. The only way to do that is make sure to keep doing it and make sure that whatever you do is better than the one before. Keep building, building, building.”