Ned Stark’s youngest daughter is a survivor–she’s been through hell and back, and she’s lived to tell the tale. However, these Game of Thrones death theories about Arya Stark have us believing that our little sis may have slain the Night King for nothing. At this point, after being trained for the Many-Faced God, Arya seems indestructible. She’s even let go of her death list. However, after watching King’s Landing fall to pieces around her and barely making it out alive–we think Arya might be close to death.

Though people underestimated her at first, Arya has always been a warrior. Instead of playing with dolls or learning to sew–she learned to use her sword a defend herself. It’s a skill that every woman in Westeros needs to master. After returning home to avenge the murder of her family, Arya reconnected with her sister, Sansa whom she seems to trust above all others.

However, because Daenerys Targaryen has embarked on a blood-thirsty rampage, and Arya still has a singular focus when it comes to revenge–we’re starting to believe that she won’t be alive when the final credits roll on GoT. To be real, these theories about Arya’s death during the series finale of #demThrones have our blood boiling. 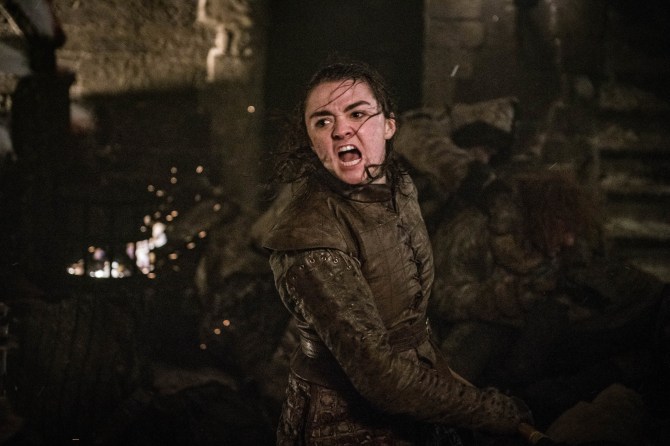 In a 2018 interview with The Guardian, Maisie Williams who portrays Arya on GoT talked about her character’s final scene on the series. Her description of what went down made our hearts drop. She explained, “I ended on the perfect scene. I was alone – shocker! Arya’s always bloody alone. But I was alone, and I had watched a lot of other people wrap.”

WHAT DOES THIS MEAN MAISIE?!

So we don’t know if you’ve heard, but there is a theory swirling around Al Gore’s internet that suggests, Arya is already dead. It has to do with that white horse that miraculously appeared at the end of “The Bells.” Since we literally watched rubble and fire reign down on Arya, we’re still flummoxed about how she survived.

One GoT fan wrote, “Yeah, I’m pretty sure Arya is dead too. She got all burnt up and a building fell on her. They made a point of showing us the death of the horse and the countless deaths of Arya. And yet they both rise from the ashes. If this isn’t some lord of light shit, I’m gonna be pissed.” However, since Arya pops up in the series finale trailer, we’re not exactly convinced she’s dead…yet. But, GoT is known for pulling the rug from under our feet. 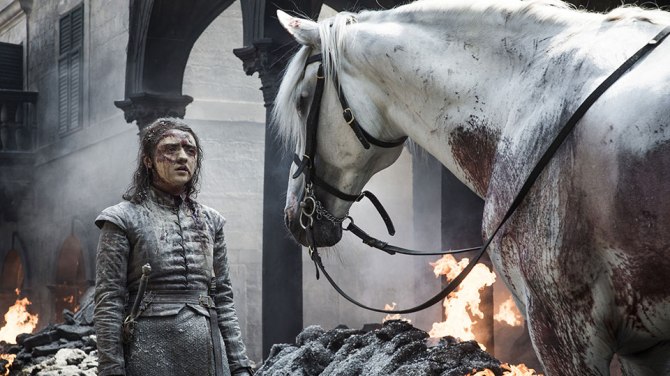 Um… can we talk about the fact that we’ve already seen Arya’s grave? Way before Season 8 of GoT premiered, HBO released a promo for the season featuring Sansa, Jon, and Arya walking toward their graves in the Stark family crypt. As the siblings approach statues of themselves– you’ll notice that while Jon’s sculpture is an older version of himself, both Arya’s and Sansa’s look like they do in the present-day. Will Arya and her sister fall in the GoT season finale?

Remember in Season 7 when Arya came home to Winterfell, and she was acting hella creepy and making Sansa uncomfortable? Though Arya has acted pretty normal since executing Littlefinger, some GoT fans believe all of that weirdness is because Arya isn’t actually Arya.

There is a theory floating around that says Arya never actually defeated the Waif in Braavos. Instead, some fans believe the Waif killed Arya back in Season 6 and used her face to return to Westeros. The only question then, is why would the Waif be so invested in the Night King’s death? Also, why would she kill all of the Freys?

We just want to know the truth–and it better not be that Arya dies in the GoT series finale or else we’re signing that petition for the Season 8 redo!