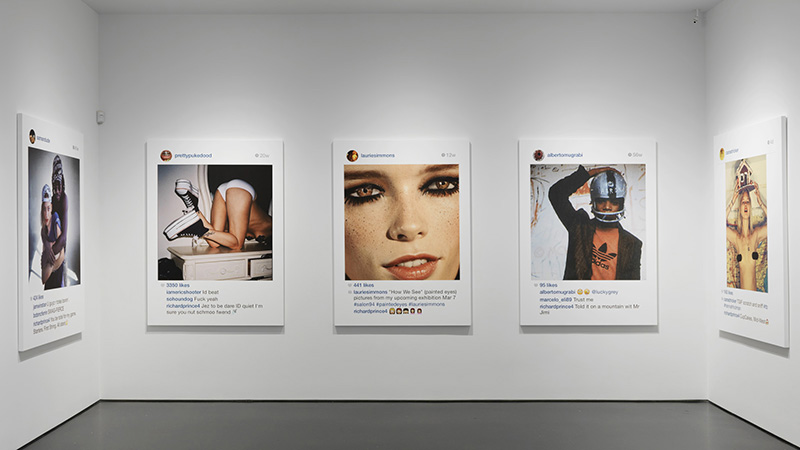 How would you feel if a well-known artist took one of your carefully thought-out Instagram photos, blew it up, then turned around and sold it for $90,000? Probably not so happy.

Well, that’s exactly what happened this month when painter and photographer Richard Prince displayed giant six-foot screenshots of other’s people’s Instagram photos as a part of the Frieze Art Fair in New York–without notifying anyone, or getting their permission. It was a not-so-subtle reminder that nothing you post on the Internet is private and—thanks to the flexibility of copyright laws—what you post can also be shared (and sold) by just about anyone.

For “New Portraits” Prince didn’t alter any of the visuals or the usernames of the photos he chose, but he did remove the captions and add his own including one that read: “DVD workshops. Button down. I fit in one leg now. Will it work? Leap of faith.”

Among the Instagram accounts featured–spanning from models to socialites to unknowns–are those of:

The series didn’t go unnoticed by the Instagrammers featured either. One, Doe Deere, took to—where else?—Instagram to express her surprise:

Figured I might as well post this since everyone is texting me. Yes, my portrait is currently displayed at the Frieze Gallery in NYC. Yes, it's just a screenshot (not a painting) of my original post. No, I did not give my permission and yes, the controversial artist Richard Prince put it up anyway. It's already sold ($90K I've been told) during the VIP preview. No, I'm not gonna go after him. And nope, I have no idea who ended up with it! 😳 #lifeisstrange #modernart #wannabuyaninstagrampicture

Her piece wasn’t the only one that went for that massive price tag either. According to Vulture, nearly every piece sold for $90,000 each.

A little background on Prince: He’s been exploring “re-photography” for decades, taking pictures of photos in magazines, advertisements, books or actors’ headshots–and altering them to varying degrees, though much of his work ends up looking pretty much identical to the originals.

Well, if he liked Instagram when he said that last year, he must really be loving it now. Let’s now just hope his project serves as a conversation starter, bringing increasing transparency to what, if any, privacy and ownership, people can expect when they post something online.

What do you think of Richard Prince’s “New Portraits” series? Should Instagram have stricter copyright rules to protect its users? Weigh in!