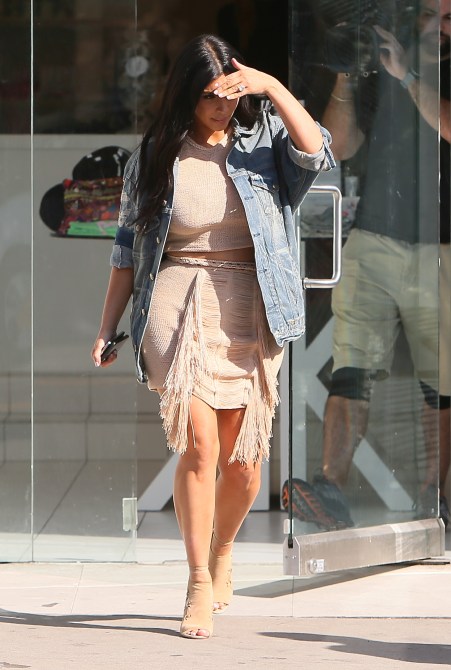 Once upon a time, a very bronzed and bejeweled and bandage-dressed Kim Kardashian worked hard to win the approval of the fashion industry — and with the help of Kanye West and his army of besties like Balmain’s Olivier Rousteing and Givenchy’s Riccardo Tisci, her hard-fought battle proved fruitful. The reality star bagged a Vogue cover, she made it to the Met Gala, and some might even say she broke the internet with her bare ass (though whether or not that’s fashion is up for debate).

Given her near 33 million Twitter followers and ability to make news with a single tweet, embracing Kim would appear to be a win-win for any brand under the sun—and in lots of ways, it has. Still, that doesn’t mean Kim gets a pass when she proves how little she actually knows about fashion. Case in point: A gaffe heard ’round the world when Kim tweeted at Giorgio Armani, asking why the brand stopped making her favorite foundation.

Why did Georgio Armani discontinue my favorite foundation??? I’m on my last bottle & everyone I know uses this!!! Please make it again!

While the brand was happy to oblige Kim’s foundation request (again, there’s no free advertising like a Kimmy K. tweet), Armani’s social media team didn’t hesitate to correct her misspelling, and—some might say—throw a little shade in the process.

@KimKardashian Dear Kim – let us know which one you need and we’ll send it to you. And Mr. Armani’s first name is Giorgio.

Kween Kim didn’t let it get to her though — she thanked the brand and blamed pregnancy and sleep-deprivation.

Thank you so much and my apologies on the spelling error, this expecting Mommy is a tad sleep deprived. 😉 https://t.co/Lzt8XL2SFe

This isn’t the first time Kim messed up the spelling of a designer’s name while shouting them out on social media, but this is the first time one swiftly corrected her—and rightly so. Good for you, Armani team.