Ariel Winter shared a photo from her friend’s birthday party on Sunday that, according to fans, showed her looking a lot slimmer. Winter—who turns 21 on January 28— was rocking a checkered jumpsuit in the picture, which highlighted her smaller waist, fans said. This led Instagram users to question Winter’s recent weight loss, which some believe is “too much.” But of course, Winter wasn’t shy to speak her mind and shut down her critics. Ariel Winter’s response to claims she lost “too much” weight is exactly what we needed to hear.

After fans posted some negative comments like, “Omg you lost your butt,” and “Too skinny now,” Winter decided to address the body-shaming. In reply to a user who said, “Nothing wrong with being honest and telling her we liked her better before ‘the change’ she was so beautiful before she started chopping up her body and if me saying so helps one gurl out here to feel beautiful who’s thinking of PS its worth it,” Winter wrote: “I appreciate you wanting to help girls love themselves the way they are, but you are also kind of cutting someone (me) down which isn’t what I think you were trying to do?”

She continued, “I also didn’t get plastic surgery. That is also not supportive of women if you’re just assuming about the way they look.” Winter makes a good poin. She looks perfectly healthy and seems happy. We are with you, girl. 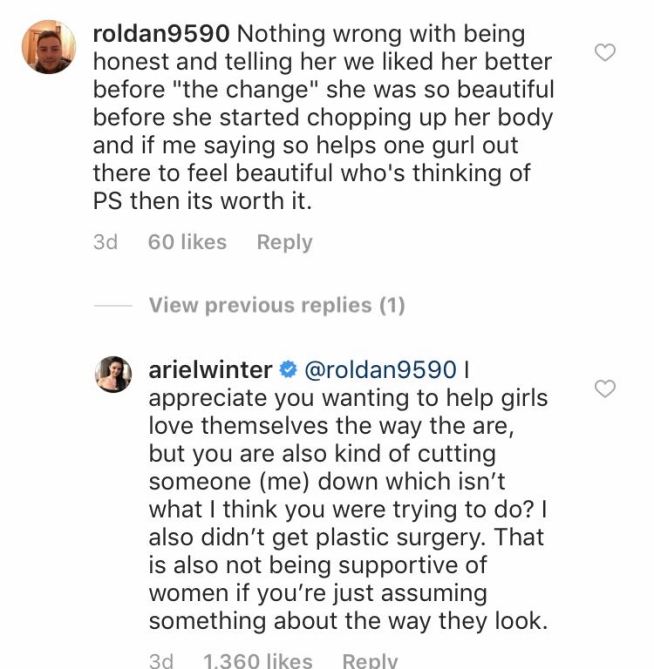 This photo isn’t the first time people have criticized Winter for her figure. Earlier this year, Winter shut down two internet trolls who had negative words to say about her celebratory New Year’s Instagram photo with boyfriend Levi Meaden.

The first commenter said that the then 20-year-old actress was “drinking underage! Very bad! Lol,” to which Winter swiftly responded. She explained that it wasn’t her glass and she wasn’t drinking, but was rather holding on to her boyfriend’s glass of bubbly for a cute photo-op.

“Honestly anything aicdic kills my stomach so I really just held his because I didn’t want to be the only one toasting with water …lol,” she wrote, according to Instagram account Comments by Celebs who picked up the clapback.

A second Instagram user jumped and accused Winter of doing drugs, writing that underage drinking is “not half as bad as all the coke/meth she uses. She literally dropped 30 ponds.”

Winter first replied making fun of the commenter’s misspelled word. “yup…I dropped 30 bodies of water so fast…” She then addressed the supposed drunk use. “And yes!! My psychiatrist switched me from my previous antidepressant that didn’t work and made me gain weight, to coke/meth!! Definitely not a new one that worked and then regulated my metabolism. Coke/meth was a controversial decision but she stands by it.”

Back in 2015, when Winter was just 17, the Modern Family actress underwent a breast reduciton. She opened up to Glamour about her decision. “It’s amazing to finally feel right,” she told the magazine. “This is how I was supposed to be.”

Winter explained that it was “really hard” to dress up for red carpet events prior to her surgery. “There was so little that I could wear that was age-appropriate. I’d have to wear the dress that was super tight and form-fitted everywhere because if I didn’t, it didn’t look good. I didn’t really have an option other than to wear fitted clothes,” Winter said. “Everyone would [say], ‘Why is she dressing so mature? That’s so inappropriate for her age!’ I understood what they were saying,” the actress explains. “It’s not like I wanted to pick out those inappropriate dresses, it’s just that I didn’t really have another choice, or I was going to get ridiculed.”

She also had the surgery for health related reasons.”I had a lot of back problems. I really couldn’t stand up straight for a long period of time. It started to hurt so bad that I couldn’t take the pain,” she explained. “My neck was hurting so bad and I actually had some problems with my spine. I had been discussing my chest with doctors for many years, but when I finally said, ‘I’m thinking of doing this,’ he said, ‘Your back is going to thank you so much.'”

It’s likely the breast reduction, in addition to her weight loss, is what’s fueling the plastic surgery discussion among her fans and followers. But we’re here to say that she looks absolutely stunning no matter what!