The Modern Family star took to Instagram to answer all kinds of fan questions. Ariel Winter talked about her weight loss; the reason is not what you might think. She also answered an even more pressing question—”The Office or Parks & Rec?” The answer? The Office. That was a tough one, but good choice, Ariel. Anyway, back to the matter at hand. Many Instagram fans had questions about Winter’s weight and asking why she looks so much thinner than she did before. This isn’t the first time Winter has faced questions about her body, and the young actress has never shied away from clapping back, standing up for herself, her body and her choices. Yesterday’s Q&A yielded more comments on her weight. Winter answered openly, honestly and extensively.

“For years I had been on anti-depressants that caused me to gain weight that I couldn’t lose no matter what I did. It was always frustrating for me because I wanted to get fit and feel like the work I was doing was paying off, but never felt that way,” she started. “I had accepted it and moved on. I stayed on these medications for so long because the process is really long and difficult.”

Winter went on to say that she was constantly “feeling eh” and had “just accepted” that rather than “trying to find something too actually feel better.” But then her outlook changed last year, she revamped her attitude and mindset writing, “I decided I was sick of feeling eh.” Then she clarified that this “eh” feeling “had nothing to do with weight.” After this whole process, she found “a great combination of medication that works for me.” This new medication is what Winter credits for her rapid weight loss—it’s nothing out of the ordinary, just new medicine that has a different effect on her metabolism. 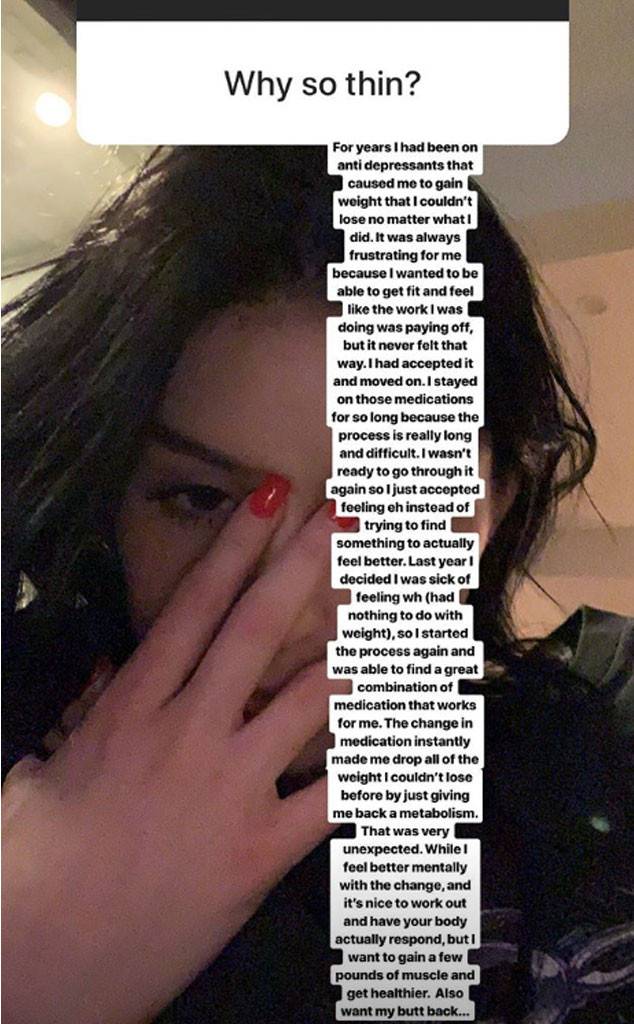 “The change in medication instantly made me drop all of the weight I couldn’t lose before just giving me back a metabolism,” she said. “I feel better mentally with the change” and added that she finds it “nice to work out and have your body actually respond” unlike before. Winter admitted she wants “to gain a few pounds of muscle and get healthier.”

Lastly, she added “Also want my butt back.” Priorities, amiright? Another fan then switched the topic of conversation to something more important than physical appearance—mental health.

The fan asked the 21-year-old actress how her “mental health is now” adding, “Thanks for speaking up it helped people like me.”
Winter responded, “Mental health is incredibly important to me. Same amount of importance as physical health.””I’ve been in therapy every week for 6 years and I don’t know where I’d be without it.” She continued, “I’ve grown so much  as a person and been able to learn how to deal with things from my past that affect my present. It’s a journey so I’m not all the way there, but I’m doing pretty good.”
https://www.instagram.com/p/Bv2nW-IAkGL/

Winter concluded, “I’m hoping the discussions will keep us progressing in the right direction with mental health checkups. We don’t need to hide our struggles even though I know how hard it is to share. We are doing something to better our own lives. Always take care of yourself and don’t listen to anyone telling you it doesn’t exist or it’s something to keep to yourself.”