No pants, no problem—at least, that’s likely what Ariel Winter thought when she went sans pants on Snapchat to show off her new, tiny butt tattoo. Though the 19-year-old is constantly the target of Internet trolls for her often scantily clad pictures, she’s obviously brushing the slut-shamers off her shoulders and taking selfies however she likes. (Insert clapping emojis here.)

MORE:Ariel Winter Hits Back at Body-Shamers Who Accused Her of ‘Squeezing’ into Her Shorts

To combat critics, the “Modern Family” actress went to Snapchat where she debuted a freshly inked tattoo right above her butt as she lounged on her couch half-naked. The tattoo read, “Love risks everything and asks for nothing.” 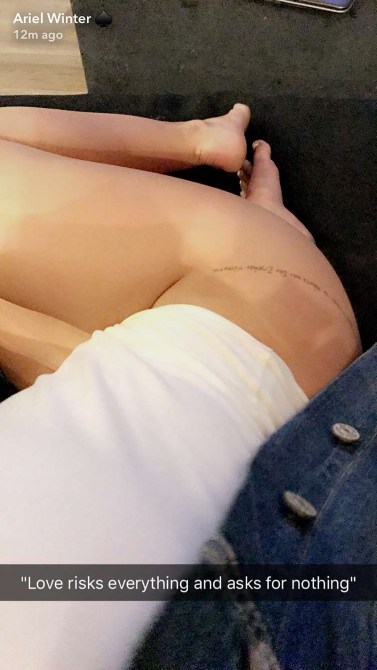 The quote is likely targeting another lane of criticism Winter has been battling recently. Since she went public with her 29-year-old boyfriend Levi Meaden, Winter has been criticized for the pair’s 10-year age difference. Additionally, the actress has combatted rumors that she supports her boyfriend financially, which she addressed in a heated Instagram post.

Another reason why Winter’s tattoo might be for Meaden is the Instagram picture she published immediately after. After debuting her tattoo, the ABC actress posted a cute selfie of her and Meaden cuddling up with the caption, “PB&C always 💘” (PB&C refers to the couple’s pet names for each other—peanut butter and cheese—which they also got tattooed on their fingers.)

Though cyberbullying needs to be banished from the world forever, if any good came out of Ariel’s trolls, it’s her super-cute tattoos.