Inappropriate workplace behavior is nothing new, but there are some industries where some people believe they can do whatever they want because their name can make or break a person’s career. Ariana Grande’s reaction to photographer Marcus Hyde’s scandal proves she’s not having any disgusting behavior.

Ariana decided to call out celebrity photographer Hyde following allegations that he offered free photographs to Sunnaya, a Los Angeles-based model, in exchange for nude photos. Sunnaya replied to Hyde’s ad looking for models. Sunnaya and Hyde corresponded through Instagram, where he asked the model for a nude picture. According to Page 6, she replied that she doesn’t have any and that she is only “comfortable shooting lingerie and partial nudity.”

Hyde then explained that the photoshoot would be free if she shot the pictures nude, but that it would cost her $2,000 if she was clothed. Hyde messaged, “Gotta see if you’re […] worth it.”

In response, Sunnaya shared their correspondence publically and captioned one of these images, “Male photographers be like.” Sunnaya’s friends and followers supported her and shared these messages.

In modeling, like in many careers, there are always people who are willing to abuse their position as gatekeepers to the industry so they can take advantage of impressionable young people looking for work.

Normally, these kinds of actions are unnoticed or unreported, but as the #MeToo and #TimesUp movements have increasingly provided agency for women, in particular, more women are standing up to people who try to cross the line.

Without mentioning his name, Grande posted an Instagram story asking models and artists not to “shoot with photographers who make you uncomfortable and make you feel like you need to take your clothing off if you don’t want to.” Grande then listed a few photographers she does like working with. 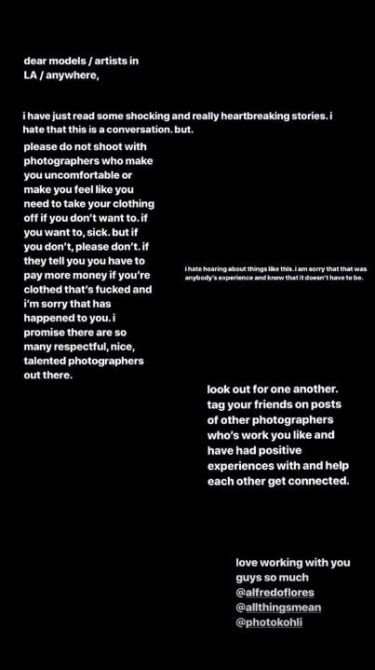 You may not have heard of Marcus Hyde, but in addition to past work with Ariana Grande, he’s chummy with Kanye West and Kim Kardashian. In addition to being their personal photographer, Kimye have forked over $25,000 for the photographer’s medical bills after a car accident. More women have come forward to talk about Hyde’s misconduct, according to Cosmopolitan.

We’re so glad Ariana is using her platform to speak out.

Arriving at the 2010 MTV Movie Awards in Universal City, California.

Performing during the Y 100 Jingle Ball in Sunrise, Florida.

Performing at the Victoria's Secret Fashion Show in London, England.

Arriving at the 57th GRAMMY Awards in Los Angeles, California.

Performing during the 2015 American Music Awards in Los Angeles, California.

Attending the 2016 Time 100 Gala, Time's Most Influential People In The World in New York City.

Performing at Vevo Presents at The Angel Orensanz Foundation in New York City.

Performing at the 2016 iHeartRadio Music Festival in Las Vegas, Nevada.

Performing during Madonna presents An Evening of Music, Art, Mischief and Performance to benefit Raising Malawi at Faena Forum in Miami Beach, Florida.

Performing during the Dangerous Woman Tour opener in Phoenix, Arizona.

Performing during the Dangerous Woman Tour opener in Phoenix, Arizona.

Performing in Washington, D.C. at the March For Our Lives event.

Photo: Kevin Mazur/Getty Images for March For Our Lives.

Attending the Met Gala at the Metropolitan Museum of Art in New York City.

Selena Gomez Is The Queen Of Birthdays Once Again