As a singer, songwriter, actress and coach on The Voice, it seems Ariana Grande‘s net worth is only bound to keep growing.

After all, the songstress has certainly come a long way since her days on Nickelodeon’s Victorious—and Ariana Grande’s net worth is following the same impressive trajectory. Grande got her start in the entertainment industry at the age of 15 in the 2008 Broadway musical, 13, for which she won a National Youth Theater Association Award.

This accolade was only the first of many, as Ariana went on to become a No. 1 charting artist upon the release of her very first album, Yours Truly, in 2013. Since then, Ariana has gone on to release five additional studio albums, including 2018’s certified-platinum record Sweetener, 2019’s double-platinum rated Thank U, Next, and 2020’s Positions, which marked her fifth consecutive album to debut at No. 1 on the Billboard 200.

Needless to say, these are all the makings of a legend living amongst us. But can the same be said for Ariana Grande’s net worth? For everything we know about her net worth in 2021—along with Ariana’s salary on The Voice—just keep on reading below.

How much does Ariana Grande make per year?

Thanks to her combined record sales, touring revenue, brand partnerships and more, Ariana Grande’s salary per year is estimated to be anywhere between $20 million to $30 million on average, according to the finance site, Go Banking Rates. There have been years, however, when Ariana has earned even more: Between June 2018 and June 2019,  the star earned an estimated $50 million, for example. Meanwhile, from June 2019 to June 2020, Ariana is estimated to have made an additional $70 million from her music career and endorsement deals.

What is Ariana Grande’s The Voice salary? 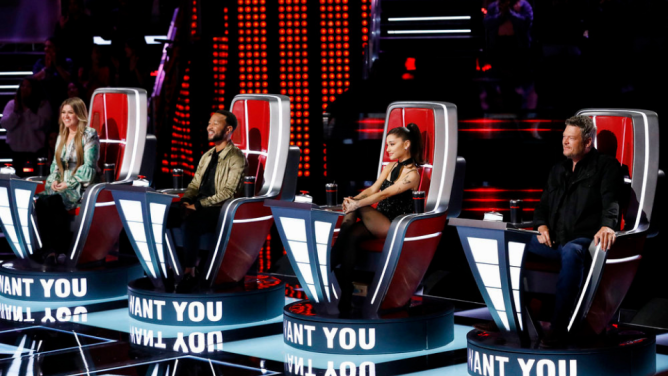 In March 2021, NBC announced that none other than Ariana Grande would serve as a coach on season 21 of The Voice. In an interview following the announcement, Ariana expressed her excitement to join the beloved NBC talent competition. “It’s so happy and infectiously joyous,” she continued. “I also am super moved by how brilliant the performers are and by their voices and the opportunity to work with artists who dream of doing what we get to do is a really fun and cool thing. I feel like I’ve been doing this for a long time now and maybe I will have some sort of thing to say that will help them execute their dreams.”

The news of Ariana’s stint on The Voice excited fans around the world, who immediately began to wonder: What is Ariana Grande’s salary on The Voice, exactly? Well, according to “Naughty But Nice” podcast host Rob Shuter, the star is earning the most out of any coach on this season of the NBC singing competition.

“Sources say Ariana is getting a whopping 20 to 25 million dollars for the show, putting her in the same category as Katy Perry on American Idol,” Shuter revealed in an episode of the iHeartRadio podcast in March 2021. By comparison, “Kelly Clarkson got about $15 million when she joined The Voice,” he added at the time.

The Voice season 21 premieres Monday, September 20 at 8 p.m. on NBC. Here’s how to watch The Voice online for free.