Ariana Grande has been known to turn to her phone’s keyboard when she’s feeling ~some kind of way~. Grande didn’t attend thee 72nd annual Grammys Sunday night, but she did turn up on social media to comment on the show, which caused quite a stir. Fans are mostly talking about Ariana Grande’s Grammys 2019 tribute to Mac Miller. The young pop star made several subtle (and some not-so-subtle) references to her late ex-boyfriend in her Instagrams and tweets from the evening.

The first Instagram photo was of the 25-year-old “Thank U, Next” singer sitting on the ground in a deliberately Cinderella-esque gown made by designer Zac Posen, which was the dress she was planning on wearing to the Grammys before her disagreement with the awards show’s producers. “when @zacposen makes u a custom gown it doesn’t matter if you’re singing or not 🌫 …. thank u 🖤”  she wrote in the caption.

Many believe the dress was Grande’s way of paying tribute to Miller, who passed away of a drug overdose in September 2018. Back in May, Grande revealed that Miller’s 2016 song, “Cinderella,” was about her when she talked about their breakup on Twitter, leading fans to believe that her princess-like dress was an homage to her late ex.

Grande revealed “Cinderella” was about her when a fan criticized her for breaking up with the rapper and blamed her for his behavior. “Mac Miller totalling his G wagon and getting a DUI after Ariana Grande dumped him for another dude after he poured his heart out on a ten song album to her called the divine feminine is just the most heartbreaking thing happening in Hollywood,” the fan tweeted.

She responded, “How absurd that you minimize female self-respect and self-worth by saying someone should stay in a toxic relationship because he wrote an album about them, which btw isn’t the case (just Cinderella is ab me),” she wrote at the time. “I am not a babysitter or a mother and no woman should feel that they need to be. I have cared for him and tried to support his sobriety and prayed for his balance for years (and always will of course) but shaming/blaming women for a man’s inability tot keep his shit together is a very major problem. Let’s please stop doing that. Of course I didn’t share about how hard or scary it was.”

Along with the Instagram of her dress, Grande also shared a video of herself snuggled up with Miller’s dog, Myron, whom she adopted. “It’s me your tiny, highly emotional, Italian, and now grammy award winning friend,” she wrote in the caption.. “I’m super tarnished lol. But super grateful. Thank u for everything. Myron is in my arms n he says hi as well.”

In the video, Grande asks, “Is it rolling?” And then simply says, “Thank you so much.” Grande was thanking the Recording Academy for her first Grammy win. She won Best Pop Vocal Album for Sweetener, beating out fellow nominees Camila Cabello, Taylor Swift, P!nk, Shawn Mendez and Kelly Clarkson. She also took to Twitter, writing that the win was “wild and beautiful.”

Grande and Miller were both nominated for Grammys on Sunday, February 10 but only Grande won, which she was upset by, according to fans. The Grammy winner took to Twitter after Cardi B won best Rap Album over Miller. Here are the since-deleted Tweets: 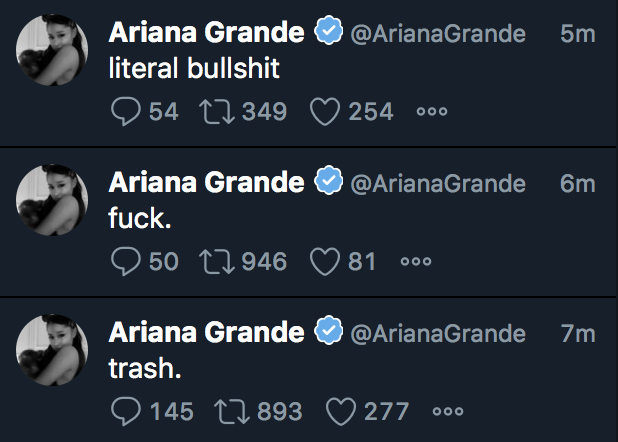 Grande clarified to a fan that she wasn’t throwing shade at Cardi B; she was just upset her late ex-boyfriend had lost. “Nothing to do w her,” she wrote. “Good for her. I promise. I’m sorry.” 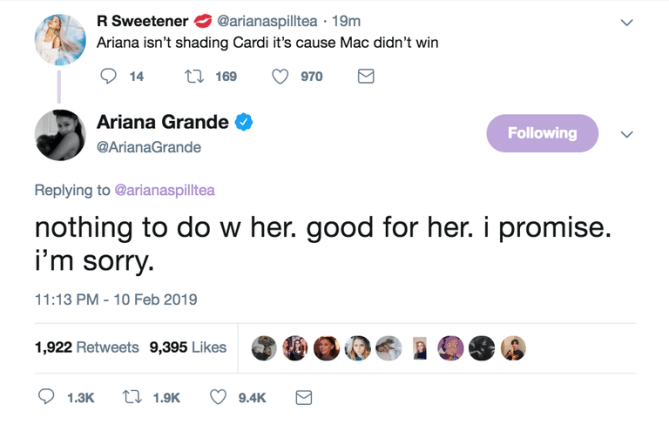 Miller’s album Swimming was his last chance to win a Grammy for his music. So Grande’s hope and pain in the loss is completely understandable. Grande has been open about how deeply Miller’s death has affected her. Back in November, Grande wore what looked like Miller’s sweatshirt while holding his dog.

A fan account posted, “We miss you Mac! 🙁 fly high angel// Ari wearing Mac’s hoodie! I don’t know if it exactly is his but it is the same”

On September 14, Grande posted a tribute to Miller just seven days after his death. The singer wrote, “i adored you from the day i met you when i was nineteen and i always will. i can’t believe you aren’t here anymore. i really can’t wrap my head around it. we talked about this. so many times. i’m so mad, i’m so sad i don’t know what to do. you were my dearest friend. for so long. above anything else. i’m so sorry i couldn’t fix or take your pain away. i really wanted to. the kindest, sweetest soul with demons he never deserved. i hope you’re okay now. rest.”