Ariana Grande’s most recent single, “7 Rings,” hit the tops of the U.S. and U.K. charts after its release. According to Forbes, it actually broke several streaming records. We’re not surprised. Grande, especially this year, has had a knack for writing songs that resonate with fans and, really, all popular media consumers. She has great taste or well, we thought she did until Ariana Grande’s recent “7 Rings” tattoo fail on Instagram on Tuesday.  In trying to celebrate her success and commemorate her hit single with a tattoo, it seems the singer accidentally tattooed the wrong word permanently on her hand.

Grande tattooed two Japanese symbols on her palm (arguably the most painful area to get a tattoo), but the intended meaning was very wrong. She intended to tattoo “7 Rings” in Japanese, but she actually received was “portable clay stove used for cooking.” So basically, Grande got a tattoo on the palm of her hand that means BBQ grill. Huh.

Grande’s Instagram of the palm of her hand garnered more than 658,000 likes and more than 12,000 comments in under an hour of being posted. And her 144 million Instagram followers had a lot to say, eventually causing Grande to remove the post.

One fan took to twitter, writing “for those who are confused, ariana grande got a tattoo on her hand in japanese intended to spell out “7 rings” and posted it on instagram (now deleted), but japanese people in the comments started saying how the REAL translation is bbq grill.”

The user included the photo of Grande’s palm, along with a screenshot of some comments from Instagram users on Grande’s OG Instagram picture: 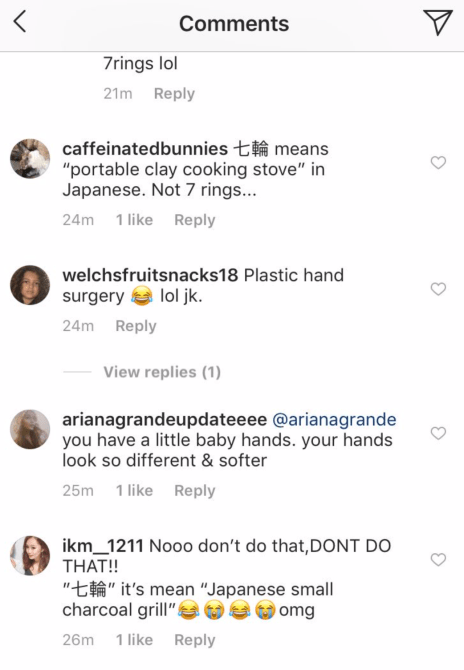 Luckily, Grande’s fail still lives on the Instagram of her tattoo artist, Kane Navasard, who wrote. “If you didn’t know, @arianagrande is a G.”

EBEN tweeted, “Imagine getting bbq grill tattooed on your palm”

Well, EBEN, we all know one girl who doesn’t have to imagine it. She’s living the reality!

One Twitter fan made a valid point when she responded, “I mean a girl got Harry styles on her face so anything is possible man.”

That’s actually very true. Things could be much worse for Grande. But she did get pretty defensive about her decision, claiming that she knew what her tattoo said and chose to make it that way.

“indeed, i left out “つの指” which should have gone in between. It hurt like fuck n still looks tight. i wouldn’t have lasted one more symbol lmao. but this spot also peels a ton and won’t last so if ii miss it enough, i’ll suffer thru the whole thing next time.

“It’s 99% gonna go away he said,” Grande continued in another tweet. “but i wanted to feel it lol. he was like that’s the most painful spot for sure. i was like ……….. i’m curious.” A user took screenshots of Grande’s tweets before they were later deleted: 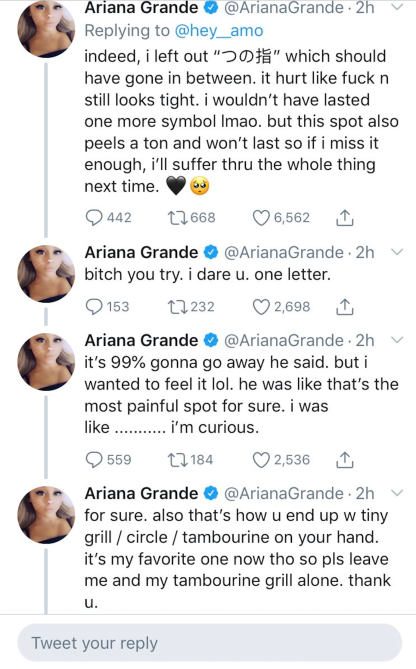 But some fans didn’t accept her explanation. One fan was particularly critical of the tattoo job itself, writing, “It doesn’t even look good either. It looks like it was drawn on with a sharpie. So not only did she not know what it meant, but went to someone who clearly doesn’t know how to do calligraphy tats to top it off.”

One user simply posted a laughing face emoji with tears and a link to pictures of portable clay grills.

One fan tried to stand up for Grande, explaining that she is fluent in Japanese so she “knew what she was doing.”

Another posed a fair question, asking, “If she was so fluent, how’d she mess up 7 rings into bbq grill “

Despite the error—made knowingly or not—the 24-year-old singer seems happy with her decision. “it’s my fvorite now tho so pls leave me and my tambourine grill alone. thank u”