Two months ago, I purchased two exquisite Oscar de la Renta dresses for a third of their respective original prices at the brand’s sample sale in New York City. In the process, I lost my favorite bra.

While mercilessly searching for that treasured Gap undergarment, I bumped into three soon-to-be-brides who happened to be walking around the small space (overcrowded with both hideously ugly and awards-show worthy gowns) while holding their own future wedding dresses. Their gowns were also heavily discounted, compared to their cost if purchased at a brick-and-mortar Oscar de la Renta store (or Saks, or Bergdorf Goodman, or just about any other shop that offers customers full length mirrors and all the time and space they might need while in a fitting room).

Given the outing’s goal—either to save a boatload of money on something you definitely need, or to spend not-as-much on something you definitely don’t—and our collective success that day, I began to think: Did Mr. de la Renta price his offerings knowing they’d likely be purchased on sale? Does anybody buy anything at full cost anymore? Are sample sales even deals, or are they masked over-priced affairs? Most importantly: Are the psychological and financial implications (and the loss of my precious bra) of attending a sample sale even worth the effort?

“It really depends on what type of shopper you are,” says Laura DiGiovanna, the marketing director at 260 Sample Sale, a third party company that provides brands with the space, security, maintenance, marketing and overall organization needed to set up a sample sale, when asked if sample sales are ultimately more rewarding than traditional shopping experiences. “You have to weigh the pros and cons: For the shoppers that want that love and attention, that catering, we do that to the best of our abilities […] but there are like 700, 800 people down there.”

Home to between 10 to 20 recorded sample sales on an average month, New York is the undisputed capital of buying high-end fashion pieces on a budget. This city-specific quality has a dual source: On the one hand, New Yorkers love the thrill of the hunt and the score of a deal (who doesn’t enjoy winning?). Simultaneously, the city “was [always] the epicenter of where [dress] samples would pile up and need to be liquidated,” explains Assaf Azani, vice president of 260 Sample Sale. Logistically speaking, the various “leftover” pieces are already in the city—why not try and make a last-minute profit off at least some of them? 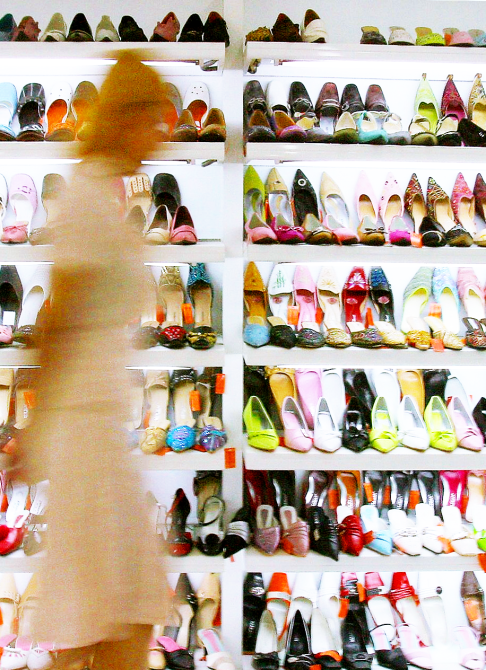 “Sample sales have changed so much over the years,” says an experienced sample sale associate who leads two major sales each yea. She’s agreed to speak on condition of anonymity given her extensive contacts in the retail industry. “I remember when […] it was a true ‘sample’ sale. Meaning: A rack of samples and damaged items with markings that could definitely not be sold in a store.” Given the success of the sales, the events began shifting in quality in order to attract an even greater variety of customers that could potentially liquidate an even bigger roster of pieces that would likely not be purchased otherwise. As brands began recognizing a buyer’s greater psychological disposition to purchase an item when confronted with the word “sale”—especially in a do-or-die situation—the sample sale shifted in nature.

“I think all brands mark up their prices with the intention of putting it on sale,” says the associate. “I think now these brands are taking advantage and sell one rack of samples at true sample prices and the rest is just leftover stock at department store prices or online sale price. [You go to the sample sale and see] brand new merchandise in plastic and on hangers as if in a stockroom of a department store.” The sample sale is still a sale, but not just of samples.

“No, not at all,” says Steven Dann, owner of two eponymous high-luxury boutiques on Long Island, when asked whether he believes that brands whose products he sells price their items knowing that they will eventually be sold at a discount during a sale. He also runs sample sales at the end of each season, trying to organize them when “there are only one of each item left,” clearly preserving the aura of exclusivity that has always defined high-end (and high-price) products.

“We always try to get the most competitive pricing,” says Azani while discussing the process involved in pricing each piece. “In fact, when most clients come with a very aggressive price, we’re not ones to dissuade them. If anything, those are the sales that are the most memorable, those are the sales that people go back to the office with two huge shopping bags and start talking to their co-workers about what they found for $25.” Yet, unsurprisingly, the steepness of the sale price doesn’t deter shoppers from asking for even more discounts. DiGiovanna mentions quite a bit of haggling during the events, “but we have a strict policy: The price that our client sets is the price we sell it for.” All leftover merchandise is eventually returned to the client on the final day of the sale.

Emilia, one of the brides who found her dress at the de la Renta sale, echoes Azani’s feeling towards the everlasting memory of a really good sale. “I went to a wedding salon and tried on a few dresses but the prices for the dresses that I liked and I would want were really high,” she remembers. “My mom had told me that a sample sale was coming up so I went into [the wedding salon] knowing that I would end up buying the dress at a sale.” The gown she purchased at the Oscar de la Renta sample sale came with a 90 percent-off price tag.

Sure, brands may price their offerings knowing that they will eventually host a sample sale: “The department stores have been undercutting full price retail [too],” says Azani. And it’s common for consumers to wait until coveted merchandise goes on sale at stores like J.Crew, Gap, or Aritzia—because it will. (All of those store declined to comment on this story.) But, from a customer’s perspective, what would the other option be? Not own the piece at all? “There’s a barrier to entry for a lot of brands,” comments Azani when discussing what he believes to be the ultimate appeal of a sale. “I think a lot of customers may know of a brand but never actually bothered walking into the store or touching the product of thought of buying the product because it is out of their [price] range. So, the minute you bring it to the sample sale, it’s peaking everybody’s interest.”

Azani’s logic is, well, logical: You will never be able to afford that full-price Balenciaga bag—but once the sample sale hits, whether the price of the bag is inflated or not is besides the point. What counts is that the bag is now within your budget.

Dann begs to differ. “In my opinion, your typical sample sale is the worst thing that has happened to fashion,” he says over email. “Don’t get me wrong, I know the people who can’t afford retail are thrilled for a sample sale, but these have hurt the business as a whole.” As way of explanation, the boutique owner mentions the status and exclusivity involved in being able to afford an expensive item. “The full price client now thinks twice about spending $6,000 on a Nancy Gonzalez bag at Bergdorf Goodman,” he says. “Because she knows that her friend bought the same bag she bought last season, two months later for 60 percent off.”

Given the laws of supply and demand, Dann’s argument follows logic: The cheaper the product, the greater the number of potential buyers. The greater the number of potential buyers, the lower the value of the object. The dramatic result? Poof, no more high-end fashion industry. Whether the outcome is ultimately bad or good, whether the happiness of the averagely salaried American trumps that of the rich American (who wants to be the only one to ever be able to afford that $6,000 Nancy Gonzalez bag) is a matter of opinion and perspective. But one thing is for sure: Putting that Oscar de la Renta gown on knowing that I paid a margin of what Mr. de la Renta originally asked me to pay, albeit bra-less, feels oh-so-sweet… considering I just spent $600 on a pair of Gucci loafers—at a discount!