If you’ve watched the Olympics, you may have wondered to yourself: Are Olympic medals real gold? And if they are, how much is an Olympic medal worth if an Olympian chose to sell theirs? We break down those answers ahead.

Though the Olympic Games started in ancient Greece, the first Olympic medal wasn’t given until the 1896 Olympics in Athens, Greece, where winners were given a silver medal and an olive branch. Runner-ups received a laurel branch and a bronze medal. The prizes were a nod to the Ancient Olympic Games, where winners received an olive branch from a wild olive tree in Olympia that was intertwined to form a circle.

Gold medals, however, weren’t given until the 1904 Summer Olympics in St. Louis, Missouri, which started the three classes of medals we know today: gold for first place; silver for second place; and bronze for third place. Though the design of medals has varied since the 1896 Olympics, for the most part, the design selected for the 1928 Olympics remained for more than 70 years until it was redesigned at the 2004 Olympics in Athens. The redesign was due to controversy around the use of the Roman Colosseum on the medals rather than a building with Greek roots. Each medal, however, must include the following details: the five rings symbol, the Greek goddess of victory Nike in front of the Panathinaikos Stadium in Athens, and the official name of the respective Games (such as Games of the XXXII Olympiad Tokyo 2020), according to the International Olympic Committee.

Along with medals, athletes who place between first and eighth also receive an Olympic diploma. All athletes who compete in the Olympics also receive a participation medal and diploma, which vary from year to year in design. At the main host city stadium, the names of all medal winners are also written on the walls. So that’s the history of medals at the Olympics in a nutshell. But are Olympic medals real gold? And how much are Olympic medals worth? Read on to find that answer. 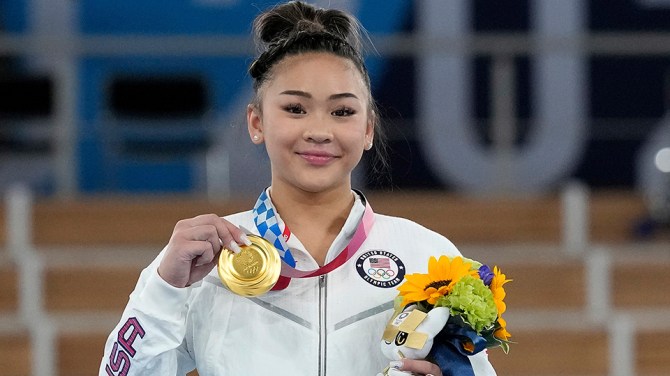 So…are Olympic gold medals real gold? Well, yes and no. Olympic gold medals have some gold in them, but they’re mostly made of silver. According to the International Olympic Committee (IOC), gold and silver medals are required to be at least 92.5 percent silver. The gold in gold medals is in the plating in the outside and must consist of at least 6 grams of pure gold. As fans may have noticed, many gold medal winners will pose with their medal in their mouth on the winner’s podium, as if they’re about to take a bite out of it. While real gold dents, viewers won’t see much of a difference in Olympic gold medals as they’re made of mostly silver. “The medals for first and second places shall be of silver of at least 925-1000 grade; the medal for first place shall be gilded with at least 6g of pure gold,” An IOC spokesperson told Newsweek in 2021.

Silver medals, on the other hand, are made of pure silver, while bronze medals are 95 percent copper and 5 percent zinc. The shape of medals is usually circular with an attachment for a chain or a ribbon. The minimum diameter is 60 millimeters, and the thickness is a minimum of 3 millimeters. Medals should weigh between 500 and 800 grams (17.64 to 28.22 ounces). Gold medals weighing about 556 grams in total, while silver medals weigh 550 grams and bronze medals weigh 450 grams.

For the Tokyo 2020 Summer Olympics, the medals were also made of material recycled from electronic devices donated by the Japanese public. According to the official Olympics website, Junichi Kawanishi, director of the Japan Sign Design Association, designed the medals, which were made from small electronic devices, such as used mobile phones, collected from across Japan. Around 5,000 medals were produced for the 2020 Tokyo Olympics, which is the first to involve citizens in the production of medals and is the first to manufacture them using recycled and sustainable metals.

The medals for the Beijing 2022 Winter Olympics were completely different. According to Newsweek, the Beijing Olympics medals—which were designed by chief designer Hang Hai and pays tribute to the medals from the 2008 Beijing Summer Olympics—consists of five circles. At the center of the circles are the five famous Olympics, as well as the official name of the event: XXIV Olympic Winter Games Beijing 2022. According to the the Olympics website, the design is “Chinese ancient jade concentric circle pendants” with the outer rings featuring ice, snow, and cloud pattern.

In a nod to the Beijing’s record as the first city to have hosted both the summer and winter Olympics, the gold, silver and bronze medals also resemble the “jade-inlaid medals” from the Beijing 2008 Summer Olympics, showing Beijing as the first “Dual Olympic City.” On the back of the medal is an emblem of the Olympic Winter Games Beijing 2022, with an engraving of the full Chinese name of the event (北京2022年第24届冬季奥林匹克运动会). The back also includes the name of the sport the medal was awarded for, as well as astrological patterns due to how close the 2022 Winter Olympics were to the 2022 Lunar New Year. “When athletes hold the medals in their hands, they will first touch the details embodying ancient Chinese culture. Then if they look closely, they will see the cloud and snowflake patterns on the obverse side and celestial patterns on the reverse side,” Hang said. The medals are also named “Tong Xin,” which translates to “together as one,” according to Newsweek.

How much are Olympic medals worth?

So much are Olympic medals worth? Well, at a lot less than you may think. Gold medals at the 2020 Tokyo olympics are worth $820, according to CNBC, due to the inflated prices of metals like gold and silver. In 2010, Luxist reported that gold medals were worth around $494, while a silver medal was worth $260 at the time. A bronze medal was worth just $3 at the time, according to the site.

For more about the Olympics, check out Jeremy Fuchs’ 2021 book, Total Olympics: Every Obscure, Hilarious, Dramatic, and Inspiring Tale Worth Knowing. The book, which was called an “indispensable Olympic resource” and “pure fun” by The New York Times, follows the history of the Olympics, from how it began in a Victorian English town called Much Wenlock to the discontinued sports that are no longer around like tug of war, firefighting, painting and, yes, live pigeon shooting. The bestseller, which features hundreds of true tales and historical photographs, also includes stories from both internationally known and little known athletes like gymnast Shun Fujimoto, who led his team to victory with a broken knee.