You’d think in this digital age we’d know if someone was married, right? Public records, paparazzi shots, even sleuth-y fan instagrams tell us what our favorite stars are doing at any given time of the day, so why would something as big as a marriage certificate go under the radar? Well if Beyoncé can hide an entire album, Lady Gaga can hide a wedding. But is she? 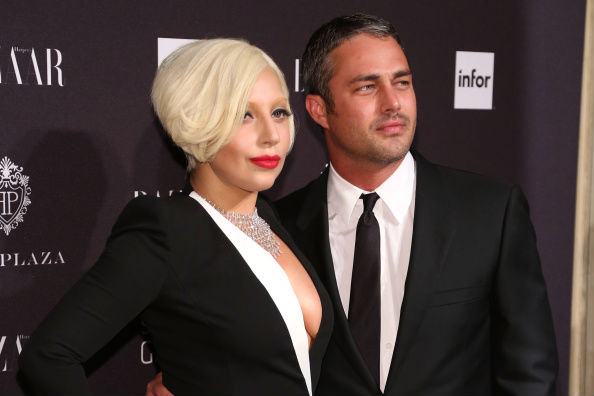 Ms. (or it is Mrs.?) Gaga and her beau (or is it husband?) Taylor Kinney, have been dating since 2011, when he appeared as her love interest in the video for “You and I.” Like most celebs, their relationship is constantly scrutinized in the press and any snippet of news about a break-up, engagement, marriage or baby is researched and dissected to death. But because there’s been a lot of rumors lately, and because where there’s smoke there’s usually some fire, let’s take a breath, regroup, and uncover what we know so far:

In July, she was spotted shopping for wedding dresses in Canada with her mom. And then she tweeted this:

Next, Kinney was caught red-handed—wearing a “real” wedding ring on his finger: Having a little fun on Instagram, Kinney’s “Chicago Fire”/”Chicago P.D.” co-star Sophia Bush posted the photo below, with the caption: I’m REALLY excited to be on @nbcchicagofire tonight! Just about as excited as I was to see my buddy #TaylorKinney at our press day yesterday. Bear hugs are the best hugs. #ChicagoFire #ChicagoPD #ThatsHisPersonalRing #NotForTheShow #EveryoneCalmDown #LindsayAndSeverideArentMarried

I'm REALLY excited to be on @nbcchicagofire tonight! Just about as excited as I was to see my buddy #TaylorKinney at our press day yesterday. Bear hugs are the best hugs. #ChicagoFire #ChicagoPD #ThatsHisPersonalRing #NotForTheShow #EveryoneCalmDown #LindsayAndSeverideArentMarried

Take a look at those hashtags and you’ll see #ThatsHisPersonalRing and #NotForTheShow buried deep within. That all but confirms it right? Not so fast.

A tipster told Britain’s Daily Star that the couple just had a ‘commitment ceremony’ in New York: The ceremony, which was held at Gaga’s parents’ NYC restaurant Joanne Trattoria, was low-key, according to the source. “Gaga wanted something visual, a commitment ceremony with the people who matter most.” So… her little monsters and Tony Bennett probably, right? Nope.

That’s great and all, but who is this tipster? Why is he talking to the Daily Star? And why is no one else is talking about this ceremony?

The jury’s still out on this one, folks.