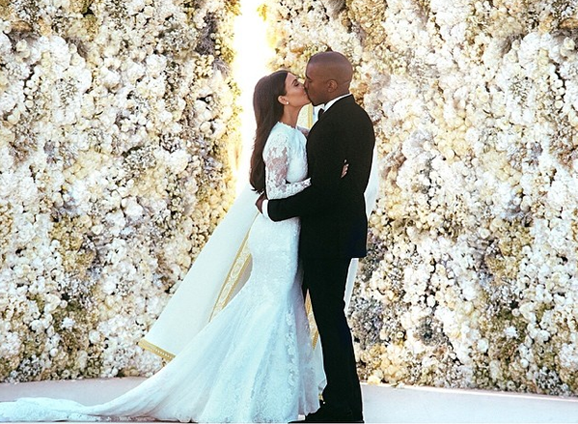 Kim Kardashian and Kanye West’s wedding may have happened weeks ago, but news from the epic bash is still trickling in. The latest juicy tidbit? That famed photographer Annie Leibovitz—the woman behind the couple’s now infamous Vogue shoot, backed out of shooting the wedding at the very last minute.

Given that this is Kanye Freaking West, he obviously wasn’t about to let this slide, and—according to Page Six—West was all too chatty on the subject at a recent event in Cannes.

MORE: Why We’re Getting Tired of Kim Kardashian’s Boobs

“Let me tell you something about that kiss photo that my girl put up,” he said, speaking of the photo above. “This was pissing my girl off during the honeymoon, she was exhausted because we worked on the photo so much because Annie Leibovitz pulled out right before the wedding. I think that she was, like, scared of the idea of celebrity.”

West then proceeded to work on the photo for four days—four days—before he deemed it ready for the world to see on Instagram. This, while the couple is supposed to be enjoying their honeymoon in Ireland.

“Can you imagine telling someone who wants to just Instagram a photo, who’s the No. 1 person on Instagram, ‘We need to work on the color of the flower wall,’ or the idea that it’s a Givenchy dress, and it’s not about the name Givenchy, it’s about the talent that is Riccardo Tisci—and how important Kim is to the Internet,” West said.

MORE: Take a Peak At This Super Adorable KimYe Photo

That the photo went on to achieve a world record as the most liked photo in Instagram history is clearly only feeding West’s massive ego at this point. “The fact the No. 1 most-liked photo [on Instagram] has a kind of aesthetic was a win for what the mission is, which is raising the palette,” West said.

No word on who ultimately shot the wedding photographs, nor word from Leibovitz on her side of the story, which we are only too sure there is one, but we do kind of feel bad for the couple that they felt the need to spend their honeymoon working on an Instagram photo.