There seems to be a bit of a trend right now in New York, of utilizing street art to depict some of fashion and Hollywood’s most mainstream celebrities. First, a couple months ago, graffiti artist Ivan Orama used his skills to paint Kanye West as Ronald McDonald all over New York; now, another artist named Bradley Theodore has created a very colorful version of two of fashion’s biggest names: Anna Wintour and Karl Lagerfeld.

MORE: Street Artist Morley on How He Got His Start

The painting, which can be found on Grand Street in Manhattan’s SoHo neighborhood, appears to be a Day of the Dead-inspired creation, with both Anna and Karl appearing as very colorful skeleton versions of their normal selves. The only thing that remains intact: their equally iconic hairstyles. Anna’s bob and Karl’s snow-white ponytail are both represented with acute accuracy, and sit atop their skeletal profiles. 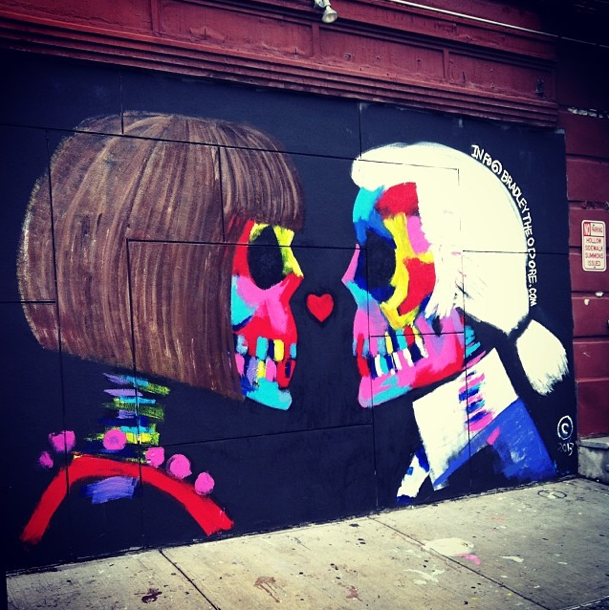 We checked out the artist’s website, only to find it still under construction. No word yet on if more of these spectacular works exist in the city, but we’d venture a guess that more are in the works if they don’t exist yet. We’re hoping Marc Jacobs is next on his list of folks to colorfully caricature.