It’s a frigid New York morning in mid-December and Anna Camp is singing Christmas carols at a firehouse not too far from Grand Central Station. Her next film, “Pitch Perfect 3,” is days away from opening in theaters, but the performance—a holiday surprise for a dozen or so firefighters—is far from the pop-powered a capella concerts that made Camp a household face.

Instead of the Bellas (her “Pitch Perfect” girl squad consisting of actresses like Hailee Steinfeld and Rebel Wilson), Camp is flanked by professional carolers from the New York Holiday Choristers. Instead of matching outfits, Camp is dressed in a fuzzy red-and-white Christmas sweater with tights and a flouncy skirt. And instead of a Top 40 hit, she’s singing a rum-fueled version of “Deck the Halls” as part of a sponsorship with Captain Morgan. (Her go-to drink is a rum-based cider with a cinnamon stick and an orange slice.)

Camp is nowhere near her uptight, needs-to-take-a-chill-pill “Pitch Perfect” character, either. She’s bubbly, giddy, and the epitome of Christmas joy. 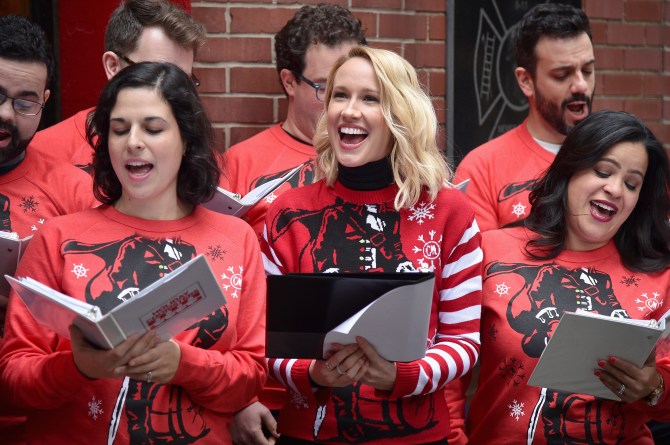 Still, underneath the old Hollywood theatrics (to describe her hometown, she threw her head back in a Scarlett O’Hara fashion and went on a tangent about South Carolina) and fart jokes (her first reaction to a truck honking was to blurt out, “Excuse me!”), Camp is frustrated. She makes that abundantly clear with the steely-eyed mood she shifts into when talking about sexual harassment and her career-long battle to play women described by more than their “long legs” and “great smile.”

There are so many women in the world clamoring to see stories that they can identify with.

“We have a long way to go, but I feel like people are seeing that there’s such a demand for women-led movies and projects,” Camp says. “Women audiences are so thirsty and hungry for that that people are starting to really supply it. I’m hoping that this surge continues.” 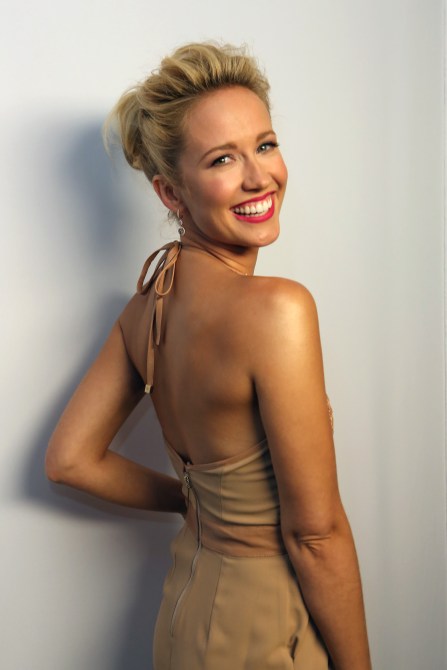 Camp, the daughter of a banker and a former ballerina, fell in love with acting after watching old black-and-white movies with her older sister growing up. She landed her first role in the second grade as a drug dealer in a D.A.R.E. to Keep Kids Off Drugs skit. “I remember going home to my mom and being like, ‘I got cast as a drug dealer. What do they wear?’” Camp says. “My mom cut off some denim shorts and tried to make me look edgy, but I was literally the squeakiest, cleanest little second grader trying to convince these kids to take these drugs.”

Why can’t the guy’s part be easily told from a woman’s point of view?

After studying theatre at a conservatory in North Carolina, Camp moved to New York City, where she lived in an apartment with four roommates for $350 a month and booked her first-ever acting job in a Super Bowl commercial for Enterprise Rent-A-Car. “I remember I got residuals for about five years from that commercial,” Camp says.

She quickly made a name for herself in the theatre world, performing in Off-Broadway and Broadway shows, before landing her on-screen break as Sarah Newlin, a devout Christian vampire hunter, in HBO’s “True Blood.” The role brought her to Los Angeles, where she got her first taste of industry sexism. 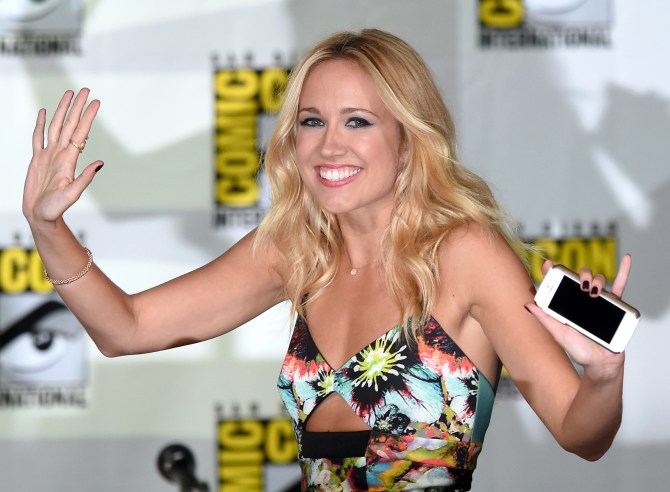 “As soon as I started auditioning for films, I would get sent scripts, and because I wasn’t known yet, I would be sent very supporting, small roles, where the girl’s name would be ‘Woman #2’ and her description would be, ‘Long legs. Great smile,’” Camp says. “You start to realize, ‘Well, I want to play the guy part. They have so much more deep roles. They’re integral to the plot. Why can’t that be easily told from a woman’s point of view?’”

Something that didn’t surprise Camp was pay inequality, a prejudice she learned early on after opening up a newspaper when she was a kid and reading that Julia Roberts was paid a fraction of what Richard Gere earned in “Pretty Woman.” Though Camp notes that she’s been “paid very well” and hasn’t felt like she’s “suffered in any way,” she admits that pay inequality is still very real in Hollywood.

We’re blowing the idea that women-led movies can’t make money out of the water.

“I remember seeing articles like that as a little kid in elementary school growing up, always knowing that there was a gap,” Camp says. “It was just the way that it was. You just knew that men were making more than women. It dawned on me when I got into the workforce that that really is not fair, obviously.” 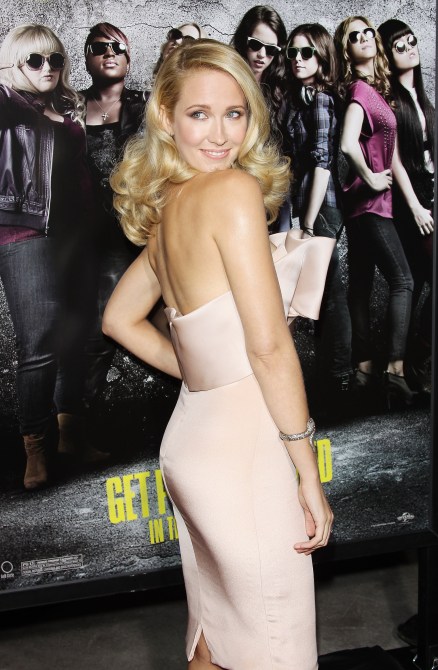 In 2012, Camp landed her big break as Aubrey Cohen, a type-A college a capella captain, in the sleeper hit, “Pitch Perfect.” For her audition, Camp flew to Los Angeles from New York where she performed a little-known indie song with a ukulele. “I was like, ‘I’m not going to Skype. I’m going to go to L.A. and I’m going to fly there and I’m going to book this because I want this so bad,’” Camp says. By the time she landed back in New York, she received a text telling her she booked the part.

Despite its massive box-office success and two sequels, Camp never expected “Pitch Perfect” to be such a hit. “Brittany Snow and I were just talking on set and we were like, ‘Can you believe that we were shooting this little movie?’” Camp says. “We had no stand-ins. We were shooting in basements. Flash-forward to the third movie and they’re rigging explosives behind us, and we’re running and jumping off a giant yacht.”

You can be sexy and you don’t have to show a lot of skin.

But that doesn’t mean she takes her success for granted for a second. Camp is fully aware of the glass ceilings that female-led comedies like “Pitch Perfect” and “Bridesmaids” are breaking in an industry that has historically undervalued the box-office power of women.

“There are so many women in the world clamoring to see stories that they can identify with and stories that they can bond over,” Camp says. “I like seeing stories about men, just like men would love seeing stories about a woman. It’s the craziest thing to think that women-led movies can’t make money because obviously we’re completely blowing that idea out of the water.”

Camp can also thank “Pitch Perfect” for introducing her to her husband, costar Skylar Astin, who she married in 2016 and is a frequent sounding board when Camp feels pigeonholed by one-dimensional roles.

“I’ll tell him the character description of the type of girl and he’s like, ‘Man, why do they have to write that? It always has to do with the women’s looks in every character description that you read,’” Camp says. “Sometimes, with the guy, there isn’t one or he’s just the lead. He gets frustrated for me and on my behalf.” 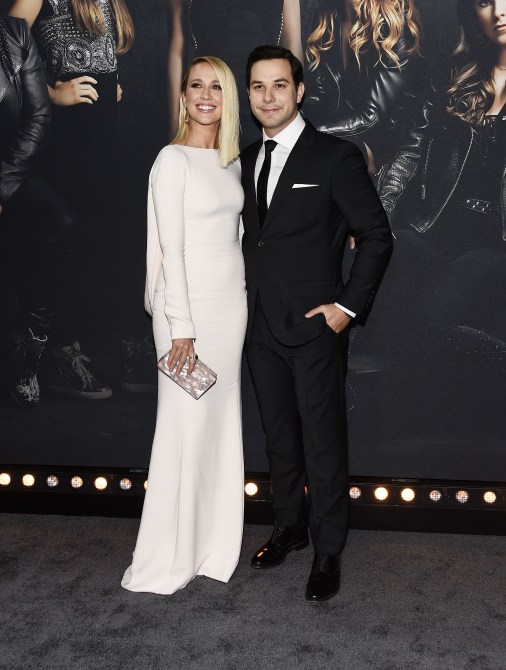 However, despite the acclaim, “Pitch Perfect” isn’t immune to claims of sexism. In a recent interview with Harper’s Bazaar U.K., Camp’s costar, Anna Kendrick, opened up about how she was asked to “dress sexier” and “show more skin” in “Pitch Perfect 3.” Camp, who didn’t know about the request until the interview came out, empathizes with Kendrick and urges filmmakers to see that women can be sexy without taking off their clothes.

“I know what she’s talking about. That happened on the movie,” Camp says. “It was one of the performances where they were like, ‘We want you guys to be sexy and stuff.’ That’s still going on in the world and hopefully people can understand that you can be sexy and you don’t have to show a lot of skin.”

You can speak up. You can definitely take the power back.

In 2016, Camp was cast as Jane Hollander, a female researcher working at a sexist 1960s newsmagazine, in Amazon’s “Good Girls Revolt.” Camp credits the series for teaching her how to stand up to sexual harassment—something she ironically experienced on set by drivers and crafts service employees who called her names like “honey,” “doll,” and “sweetie.”

“I remember thinking, ‘Do you know what show you’re actually working on?’” Camp says. “You’re driving these actresses to and from set where we’re shooting a scene where someone is calling us ‘doll’ and ‘honey’ and I’m going into a room and crying. It all became very meta. It helped me keep my awareness up when I am in situations to know you don’t have to stand for that. You can speak up. You can definitely take the power back. That show was giving a lot of voice to me, as well as the women who were watching it.” 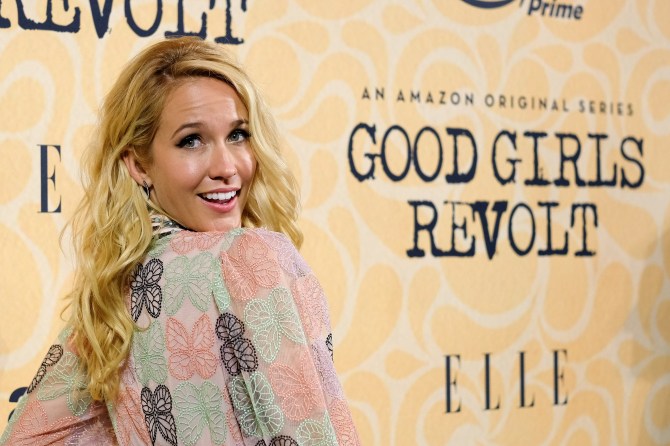 MORE: Lauren Conrad on Mommy-Shaming and Why She Doesn’t Instagram Her Son

When Camp learned that “Good Girls Revolt” was canceled after one season, despite positive reviews and vocal fanfare, she was overcome with “devastation.” That emotional eventually turned into ire when she heard rumors that Amazon’s now-ousted president, Roy Price, cut the series without even watching it. When she learned that there were sexual harassment allegations leveled against Price himself, she only got angrier.

Women are really finding their voices in a brand-new way and it’s past time for all that to happen.

“It was so incredibly frustrating,” Camp says. “It gave us an answer to, ‘Oh, that’s why.’ I’m sure there are other reasons that factor in, but we heard that he didn’t like the show. So why didn’t he like it? Probably because it was dealing with these issues and topics that he was in fact practicing in his personal life.”

As to whether the series will return after Price’s suspension, Camp admits there’s a shot. “I don’t know anything yet, but I know that they did shop it and it’s not dead,” Camp says. 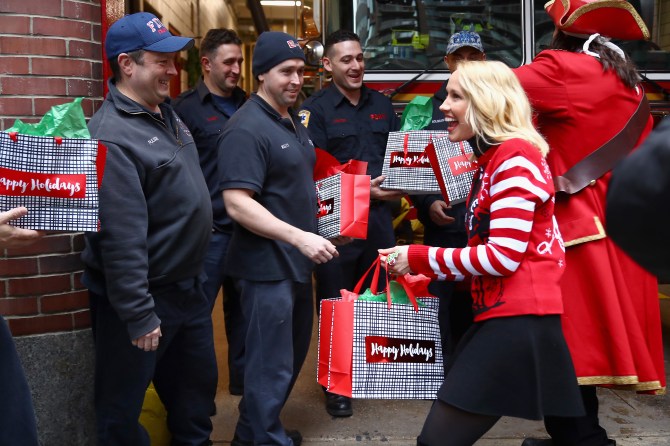 Back at the firehouse, Camp, sitting in a blacked-out SUV parked outside, is ready for her next stop. She’s headed to Central Park, where she and Captain Morgan will ride in a horse-drawn carriage bringing Christmas joy to a park full of strangers. But Camp’s positivity isn’t only good for holiday cheer. It transcends to 2018—a year she believes will see serious change for women.

“I have a good feeling that things are changing,” Camp says. “I’m very optimistic, especially right now. Women are really finding their voices in a brand-new way and it’s past time for all that to happen. I hope that the conversation continues and people don’t remain complacent.”