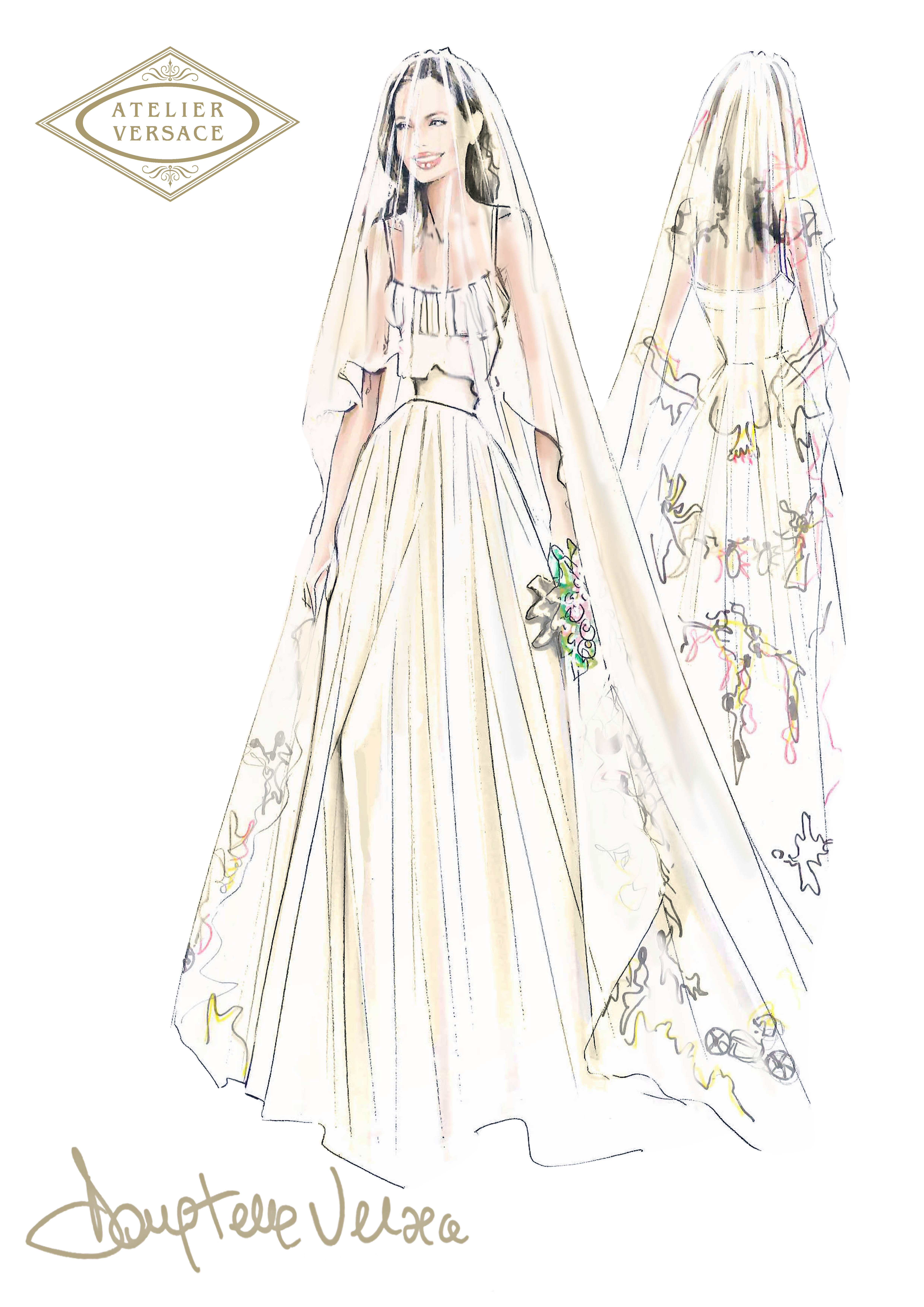 A week after it was revealed that Brad Pitt and Angelina Jolie got married in France, we finally have confirmation that the bride wore Atelier Versace on the big day.

According to the brand, Donatella Versace designed a custom silk satin Atelier Versace that was gathered at the bust with an elongated train that was—get this—detailed with embroidered drawings her children created, which were also reproduced on her silk veil, all sewed by Luigi Massi, the master tailor at Atelier Versace. Jolie capped off the dress with white Versace silk-stain pumps.

“Luigi is like family to me and I couldn’t imagine anyone else making this dress,” Jolie told People, which—along with British tabloid Hello! have exclusive photos of the whimsical dress. “He knows and cares for the children and it was great fun putting it together.”

Although Jolie hasn’t ever had any contractual obligations to Versace, she became synonymous with the label over the years, regularly wearing sexy gowns by the Italian brand on red carpets. Of course, her most notorious Versace moment is perhaps the Atelier Versace dress with that dramatic leg-baring slit she wore at the 2012 Oscars—but she was a devotee to the house long before that.

According to People, Pitt wore a suit from his closet – with a tie borrowed from one of his sons because he apparently forgot  his. Zahara’s dress was designed by family friend Adama Kebe. Maddox, Pax, Shiloh, and Knox wore black suits (noted tomboy Shiloh’s included shorts and a top hat), and Vivienne wore a white dress from her closet.

It was reported last week that the superstars—who’ve been engaged since 2012—wed in a private nondenominational civil ceremony, attended by family and friends. It was confirmed that Jolie walked down the aisle with her two oldest sons Maddox and Pax, while Zahara and Vivienne threw petals, and Shiloh and Knox served as ring bearers, a spokesman told the AP.

The two superstars have been together since 2005, and have six kids together. This is the third marriage for Angie—she was previously hitched to actors Billy Bob Thornton and Johnny Lee Miller—and the second for Brad.

In case you’ve been nestled under a rock for the last decade, you’ll know Pitt was previously married to Jennifer Aniston, but they got divorced after he reportedly got super-cozy with Angelina on the set of “Mr. & Mrs. Smith.”