Once upon a time, a fairytale started between Angelina Jolie and Brad Pitt, when he left his wife Jennifer Aniston to be with Jolie. Well, perhaps kicking things off in this manner was a tad misguided, but then things seemed so good for so long for Brangelina—humanitarianism! magazine spreads! biological children! marriage at last!—that the two crazy kids seemed destined for together-foreverness. But that all changed today, when news of their split spread like gasoline-doused wildfire across the world. And in their honor, we’re going to do the one thing they both are probably trying really hard not to do, and relive their relationship, from Mr. and Mrs. Smith to the present moment.

January 2004: Filming of Mr. and Mrs. Smith begins in Los Angeles. Though we don’t know for sure exactly when the duo started up together, their affair definitely began sometime on set.

September 2004: Though rumors of Brangelina’s beginning are already swirling, Pitt and Aniston attend the Emmys together, looking relatively happy. 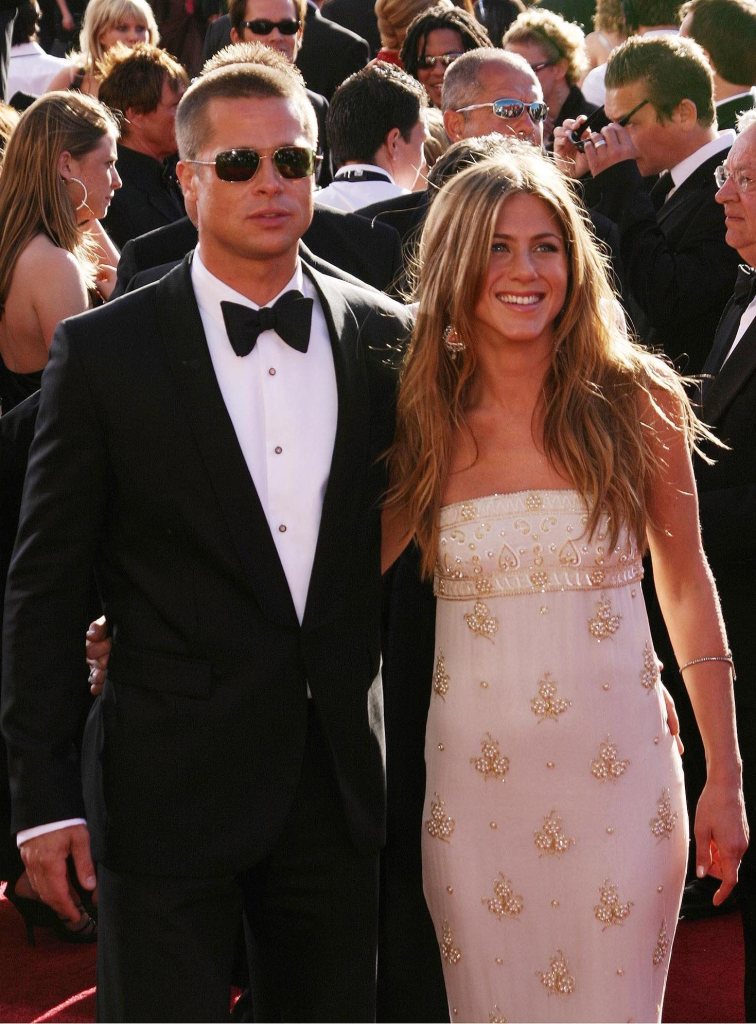 January 2005: Pitt and Aniston announce their separation. Around the world, the sound of “I told you so” rings.

March 2005: The pair appears at a Twentieth Century Fox luncheon trying really hard to pretend they’ve never embraced offscreen, but instead looking like two little kids who have been told to separate on the playground for five minutes. 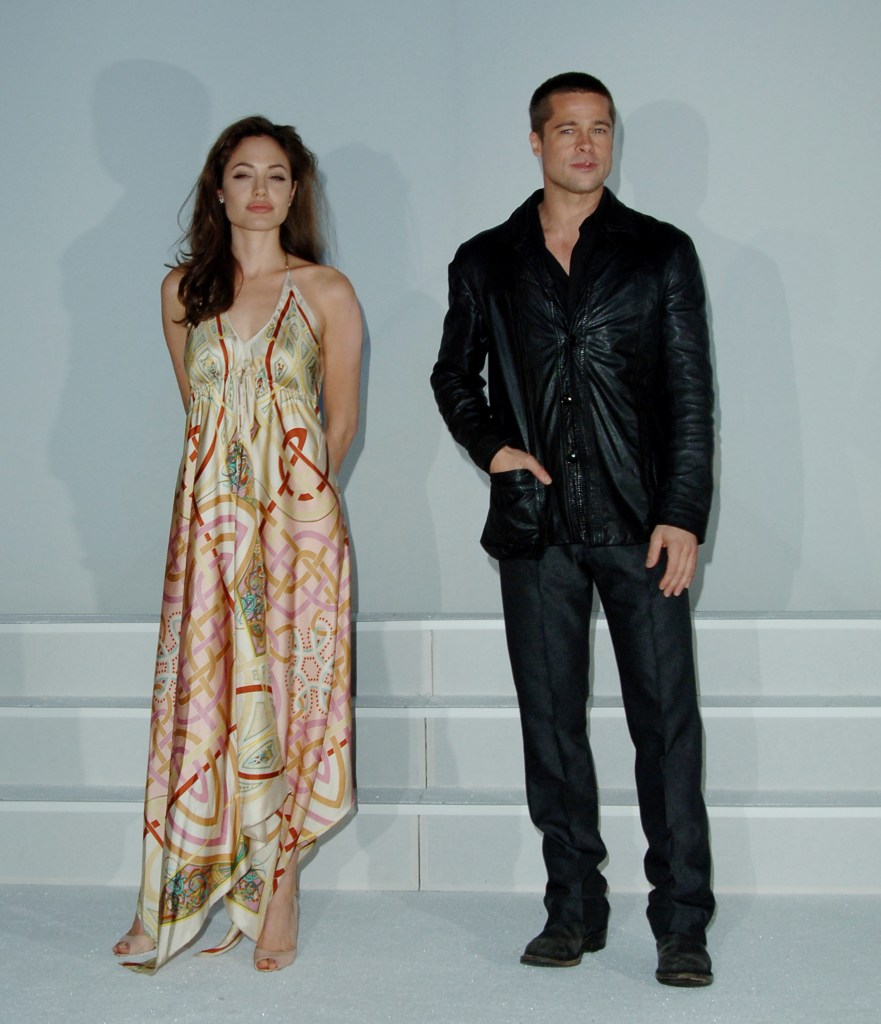 Who, us? Photo: Getty

March 25, 2005: Aniston files for divorce, while Pitt and Jolie gallivant around promoting the movie, doing little to quell rumors of romance.

April 2005: Pitt and Jolie take her son, Maddox, then 3, on an Kenyan vacation. It’s officially on.

June 2005: The Mr. and Mrs. Smith premiere yields no photos of Pitt and Jolie together on the red carpet. In May, Jolie defends herself to Marie Claire. “To be intimate with a married man, when my own father cheated on my mother, is not something I could forgive,” she says. “I could not, could not look at myself in the morning if I did that.”

July 2005: And then there was that damning 60-page portfolio in W depicting the stars engaged in all kinds of marital scenes, blissful and otherwise. Worse: It was shot in March. 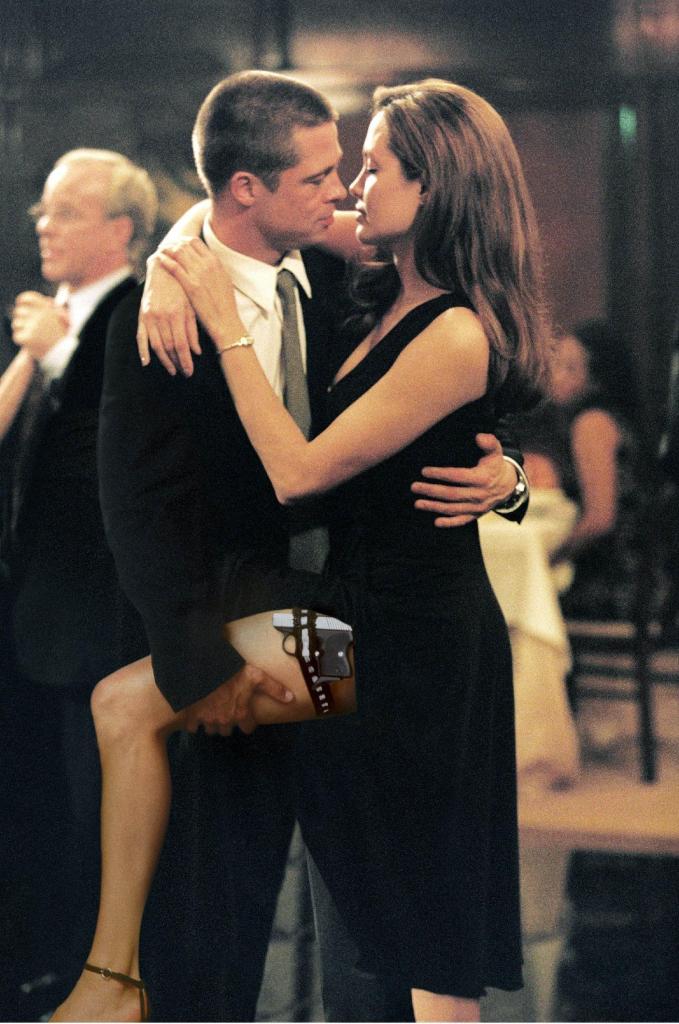 January 2006: “Yes, I am pregnant,” Jolie tells Henri Dominique, an ambassador from the Yéle Haiti relief organization in the Dominican Republic, as People reports. “We’re due in the summer.” The same month, she comes clean to Vogue. “We were both living, I suppose, very full lives. … I think we were the last two people who were looking for a relationship. I certainly wasn’t. I was quite content to be a single mom.” She maintains that they remained “very, very good friends” until January 2005, but admits they started up after that.

May 2006: Shiloh Nouvel Jolie-Pitt is born in Namibia. Photos are sold for $7 million; the money is donated to charity.

September 2006: The Jolie-Pitt Foundation starts up. Pitt tells Esquire that he and Jolie will marry “when everyone else in the country who wants to be married is legally able.” 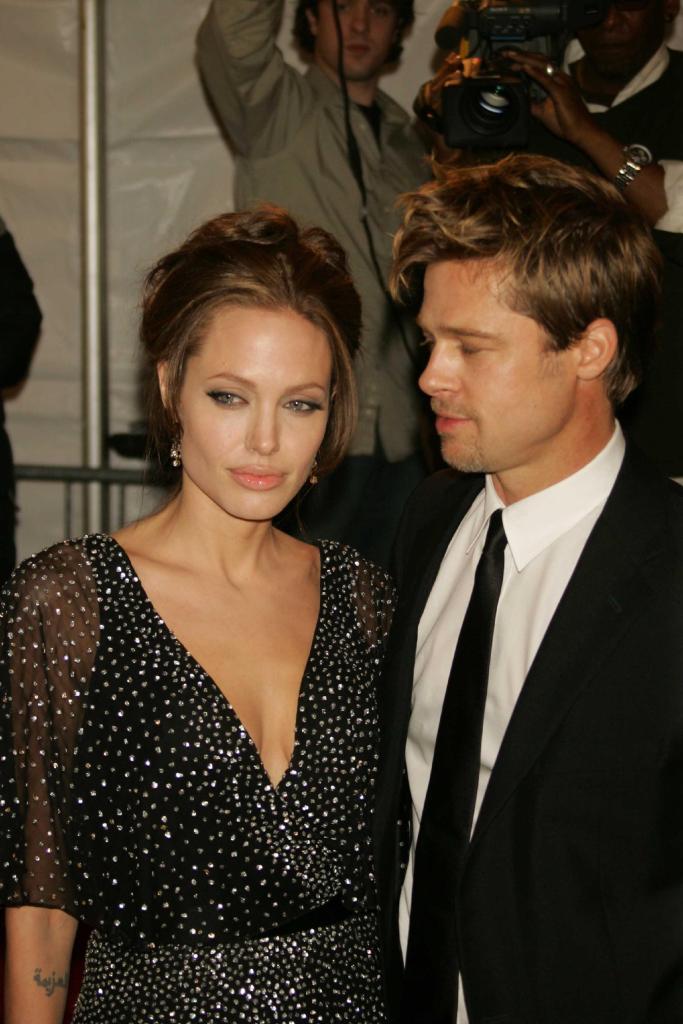 March 2007: Jolie adopts Pax from Vietnam and changes his last name from Jolie to Jolie-Pitt a month later, sidestepping laws that barred unmarried couples from adopting together.

May 2008: Jolie is expecting twins. Bizarrely, Jack Black reveals the news that Jolie was expecting more than one during a quick interview to promote Kung Fu Panda at Cannes. 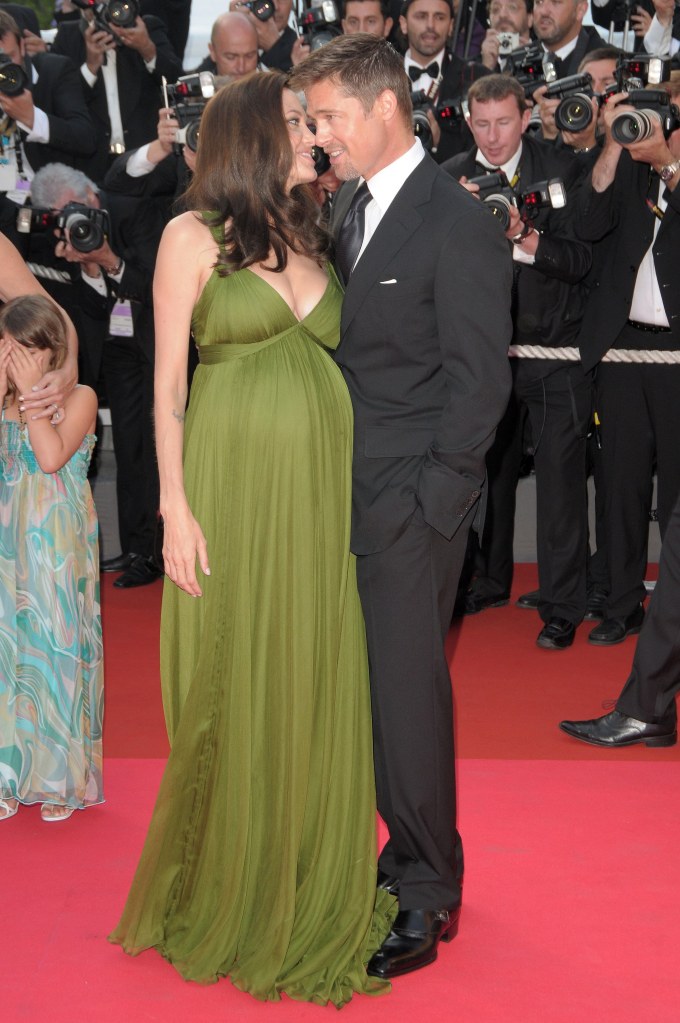 July 2008: Jolie welcomes Knox Leon and Vivienne Marcheline Jolie-Pitt in Nice, France. Again, they sell the pics, this time for $14 million; the money is funneled into their charitable foundation.

October 2008: Jolie tells the New York Times that she’s excited her kids will be able to one day watch Mr. and Mrs. Smith: “Not a lot of people get to see a movie where their parents fell in love.”

February 2010: Pitt and Jolie sue The News of the World for printing that they were separating.

July 2010: Jolie tells Parade that her relationship with Pitt goes way past the kids. “The children certainly tie us together, but a relationship won’t hold if it’s only about the kids,” she says. “You also must be really interested in each other and have a really, really wonderful, exciting time together. We do.” With a smile, she continues, “Brad and I love being together. We enjoy it. We need it, and we always find that special time. We stay connected. We talk about it. It’s very important. If Brad and I are strong and happy, then our kids have happy parents, and that’s the best thing we can give them.”

September 2011: Pitt tells Ellen DeGeneres that he and Jolie are still waiting for same-sex marriage to be legal around the country, but adds that the children are really pulling for it. “The kids are putting on the heat. They really are,” he says. “How do I get out of this one? Somebody help me. I don’t know what the future holds.”

April 2012: Brangelina are engaged, and the ring is estimated at $250K; it took a year for Pitt to design, the Daily Mail reports.

May 2013: Jolie writes an op-ed in the New York Times about choosing to have a preventative double mastectomy, and calls out Pitt for his support. “I am fortunate to have a partner, Brad Pitt, who is so loving and supportive,” she writes. “So to anyone who has a wife or girlfriend going through this, know that you are a very important part of the transition. Brad was at the Pink Lotus Breast Center, where I was treated, for every minute of the surgeries. We managed to find moments to laugh together. We knew this was the right thing to do for our family and that it would bring us closer. And it has.”

Pitt voices his support to the London Evening Standard. “Having witnessed this decision firsthand, I find Angie’s choice, as well as so many others like her, absolutely heroic,” he says. “I thank our medical team for their care and focus. All I want for is for her to have a long and healthy life, with myself and our children. This is a happy day for our family.”

June 2013: The pair appear on the red carpet for World War Z‘s premiere in London. 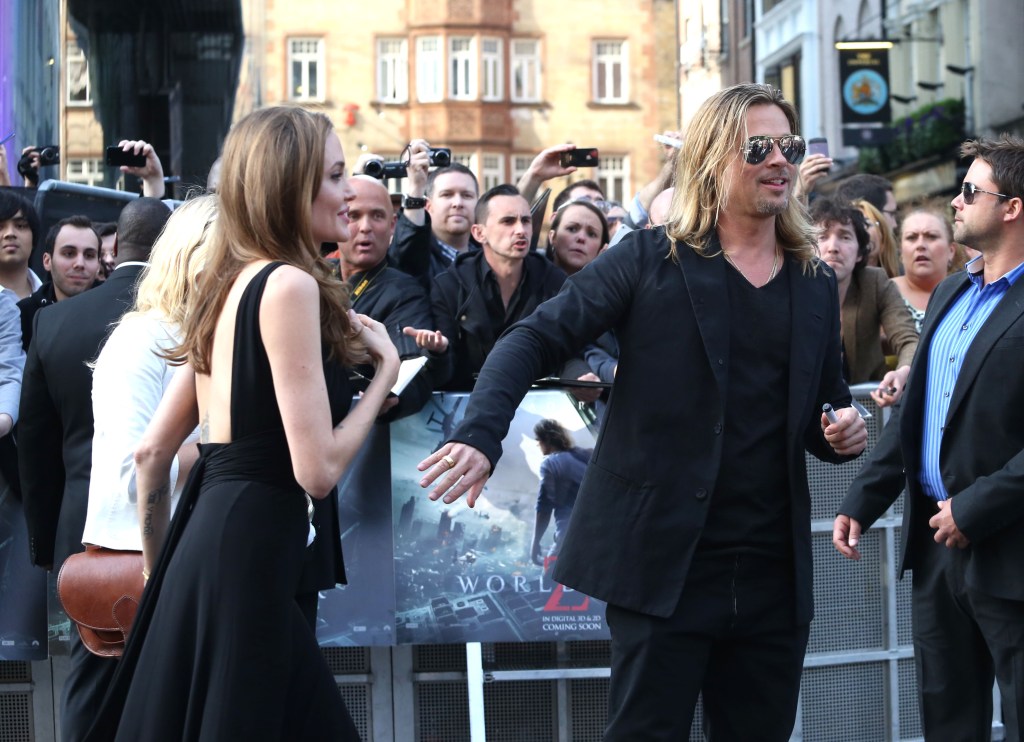 August 2014: They secretly marry at Château Miraval in France.

September 2014: Jolie (now technically Jolie-Pitt) appears on the cover of Hello in her Versace wedding dress, which was decorated by the kids.

November 2014: They honeymoon in Malta and shoot By the Sea—perhaps a harbinger of relationships drama to come.

November 2015: Jolie denies that By the Sea has anything to do with reality. “Brad and I have our issues, but if the characters were even remotely close to our problems we couldn’t have made the film,” she tells The Telegraph. “To be clear: we have fights and problems like any other couple. We have days when we drive each other absolutely mad and want space, but the problems in the movie aren’t our specific problems.”

June 2016: With what turns out to be really good intel, Us Weekly predicts a divorce.

September 2016: Jolie and Pitt separate on September 15, and a few days later, she files for divorce. “This decision was made for the health of the family,” her attorney says. “She will not be commenting, and asks that the family be given its privacy at this time.” Pitt says he’s sad. “I am very saddened by this, but what matters most now is the well being of our kids,” he tells People. “I kindly ask the press to give them the space they deserve during this challenging time.”