And now on a very special And Just Like That… Carrie Bradshaw learns about Diwali. Sure, Carrie has lived in New York for 200 years. In fact, she saw the Big Apple when it was a tiny little apple—that’s how long she’s been in NYC, yet somehow she is just learning about Diwali. I’m going to let that go…for now. Because we have more important matters to move on to. Specifically, did Carrie’s outfit pass the test. What test you ask? The Indian Aunty test.

When a co-worker asked me what I thought of Carrie’s sari, I replied, “I feel like my mom would hate it.” Personally, I liked it. But I knew it was not an actual sari. (We’ll get to that later.) I couldn’t help but wonder, what would Indian aunties think of Carrie’s outfit? So I decided to consult two experts: my mom and aunt. I told them to jump on Zoom so I could get the answer to this very important question. After the obligatory five minute set up of getting them to turn their camera on and be in the actual shot, we got down to Bradshaw business.

Hello, mom. Hello, Aunty. (Yes, I said it in Seinfeld’s Newman voice). I am going to show you a photo of a woman named Carrie wearing a sari. And I would like to get your thoughts on it.

At this point, I shared my screen to show them Carrie on her apartment stoop, in all her sari glory.

Mom, I know how to spell that. I’m Indian too!

Aunty Roma: If you say so…

As I’m writing this, I have to confess I did Google how to spell it, so annoyingly, she was correct. But I’m still a real Indian, Mom.

Aunty Veena: (getting back to Bradshaw business) It’s without a dupatta, usually you wear a dupatta. It’s a beautiful outfit. I thought it was very attractive.

(A dupatta is material worn as a scarf or head covering by South Asian women).

Aunty Veena: No. I couldn’t quite figure out what was going on there. First, I thought it was some kind of punk hairstyle. But then I looked carefully and it was a bouquet on her head. But I’ve never seen flowers done like that.

Mom, what did you think?

Aunty Roma: OK, I liked her outfit a lot. But I hated her hair. It was nothing. I don’t understand what it was. Usually, I like when they do a (braid) and weave the flowers in. So this was jarring.

What did you think of Seema’s outfit?

Aunty Roma: She was OK; she was wearing a sari!

Aunty Veena: And what she was wearing actually, that gold belt, you usually wear as a bride. That belt was not what people usually wear at a Diwali party.

Do you feel like they were trying to Americanize the sari by putting that belt on her?

If you had to rank Carrie’s outfit on a scale of 1 to 10. One being not good, and 10 being great, how would you rate Carrie’s sari.

How would you rate Carrie’s hair?

Aunty Veena: Minus one.

Oh, that wasn’t on the scale. And Seema?

Aunty Roma: I think we can give her an 8.

Aunty Roma: Yes, their outfits are both good, but we didn’t feel Seema needed the belt.

I liked the belt.

Aunty Roma: You thought Carrie was wearing a sari.

No, I was quoting my co-worker’s question. He thought it was a sari. I didn’t. I knew.

You know that hairstyle, if a regular bouquet of flowers is like $50-75 dollars, that must be a very expensive hairstyle. Do you think it was $200 dollars?

Aunty Roma: Whatever it was, it was crap. Worth zero dollars to me. 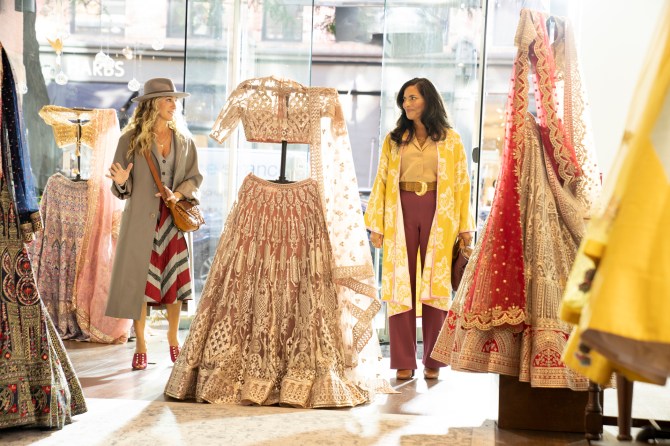 Do you think Carrie’s outfit was cultural appropriation?

Aunty Veena: Absolutely. Because what she had on was a lehenga, which she had modernized, so it was totally appropriate.

Aunty Roma: I don’t think it was appropriation. She was going to a Diwali party; it was great.

So overall, the saris are Indian-Aunty approved. But Carrie’s hairstyle is absolutely, not approved?

What did you think of Seema’s parents? (Played by Ajay Mehta and Madhur Jaffrey)

Did you think they were stereotypical?

Because you don’t ask us every single time, “Why are you single? Why are you not married?”

Aunty Roma: Never, we don’t ask anyone that question.

Aunty Veena: Because we’re too busy asking ourselves, “Why did we get married.”

OK, then. Thank you.

There you have it. Sari, not sorry Carrie, your lehenga is Aunty-approved. But your hair is not. And Seema, you’re all good, but the Aunties did not approve of you smoking. With that gold-belted sari, you already smoke the competition, so quit cigarettes gurl, otherwise these two aunties might call you—and tell you to stay single.