As a girl with a truly awful dating track record (minus my incredible boyfriend—hi, Pat!) it should come as no surprise that I’m attracted to red flags. And because of my very own toxic taste, I am willing to look past a lot of flaws in the things I love. When I find something great at the thrift store that’s pilling beyond repair or missing a button? No worries, I can make it work! When my previous Hinge dates failed to make reservations or meet a restaurant’s dress code? No sweat, it happens!

When I watched Sex and the City as a teen and saw my favorite characters engage in deeply problematic behavior? I didn’t love it, but overall, the show was too good to resist. Now, though, I’m seeing a big red flag in the reboot—and in 2021 (almost 2022), there’s simply no excuse for And Just Like That to be so blatantly fatphobic.

When I look back on beloved seasons of SATC, it’s pretty darn difficult to find an episode that would fly if it was filmed today. From anti-queer humor to moments of blatant racism, it’s a wonder this stuff was even OK to get away with back in the late ’90s and early 2000s. But what stayed with me most as I grew older wasn’t the bad behavior or the crude humor—it was the way Carrie and her friends talked about their bodies. 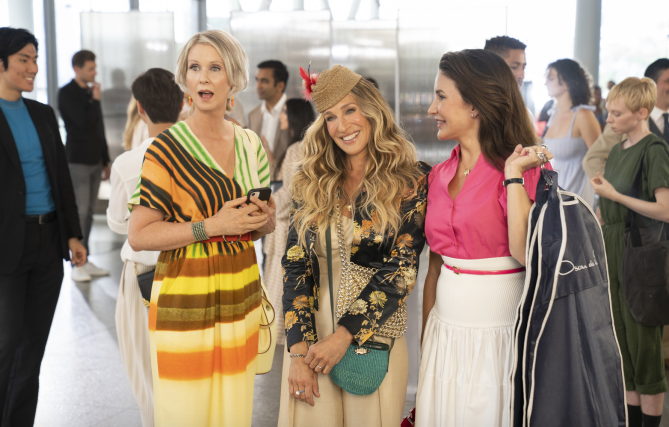 In an episode called “Models and Mortals,” the girls refer to supermodels as “giraffes with big breasts”—and yet, they were constantly striving to meet society’s beauty norms and shaming others who didn’t. Remember in season three when Carrie was gleeful to find out Natasha was chubby in college? Or, later on, when Miranda thought her whole life was over because she weighed 152 pounds after giving birth?

What about in the first movie, when Samantha’s supposed best friends are flabbergasted by her obscene weight gain? And by “obscene weight gain,” I mean five pounds at most. While these women were quick to encourage one another’s unique personal style, they were still strict about looking the part in terms of size—not everything had to be from Barney’s, but everything had to be below a size four.

“Sex And The City made an indelible impression on the pop culture understanding of what was cool and fashionable, and some of it—like the absolutely shameless body shaming—accurately reflected the times,” says Sarah Chiwaya, plus fashion blogger at Curvily and consultant. “Scenes like the one from the first movie where Carrie stares in horror at Samantha for gaining about five pounds are downright disgusting now, but that’s only because of the hard work of the body positive community to change the narrative about fatness.”

Prior to the And Just Like That premiere, Chiwaya and so many others were hopeful that the reboot would portray a more realistic New York City—one with stylish characters of all sizes. “I really hope that, at a minimum, this season doesn’t cling to aughts-era ideas about body image,” said Chiwaya before viewing the first two episodes, which aired on December 7. “And part of that would be to actually include plus size people in the cast—and not in a tokenizing way, as the series has a history of when it comes to any less-privileged community.”

Makeda Saggau-Sackey, plus fashion blogger at Glamazon Diaries, was equally eager to see change in the reboot. “Sex And The City was such an iconic show for me and my friends while in college, even though there weren’t a lot of characters, major or minor, that looked like us—black, brown or curvy,” she shares. “Representation was not top of mind back then, and I always remembered thinking how much of a missed opportunity that was.”

Producers for AJLT have been vocal about a conscious effort to make casting more diverse in terms of race, but body positive advocates note that they haven’t kept the same energy when it comes to showing a more inclusive range of bodies on screen.

“I’m excited for the new series and really hoping they represent the diversity that is New York,” says Saggau-Sackey. “I applaud their casting of Nicole Ari Parker, Karen Pittman, Sara Ramirez and Sarita Choudhury as new characters, but I’m hoping they include underrepresented women that are curvier and darker-skinned African American characters in the new series.”

Unfortunately, viewers were disappointed to see little change in the premiere episodes. Yes, talks of cast diversity were overshadowed by a Peloton-induced death, shower-soaked Manolos and a bevy of racial microaggressions (Hell, macroaggressions) from Miranda—but regardless, those of us who went in looking for improvements saw very few.

The only bright light seemed to be Sara Ramirez, who plays Che Diaz, a self-described “queer non-binary Mexican Irish diva” who works with Carrie at her podcast gig. “I was so happy to see Sara Ramirez cast in this season—they are a beautiful addition and bring a bit of much needed body diversity,” says Chiwaya, “but I really hope they aren’t the only cast member above a size six, because that’s just more of the same, stale tokenization.” 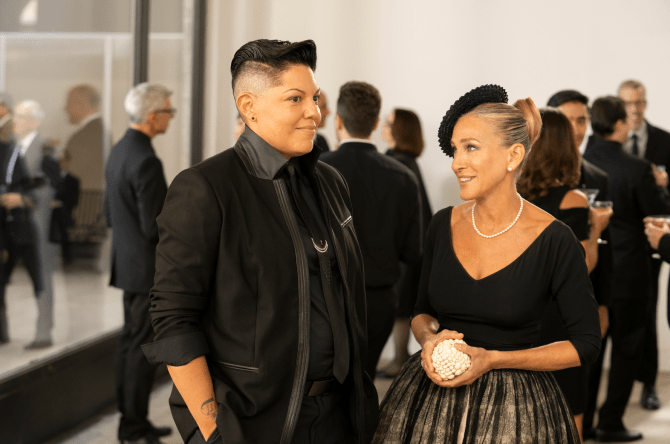 Based on the released cast list so far, it does indeed look as though the show is using Ramirez as a placeholder for progress. In many ways, Ramirez’s character is revolutionary—but how can we expect one actor to carry the weight of being the only example of body diversity? This is a big cast, with plenty of opportunities to include plus-size women as main roles—heck, I would be content to see a few plus-size background actors, getting reservations at the myriad of bougie restaurants shown or mingling in the latest couture at all the hottest NYC parties.

Unfortunately, the show’s stab at a more inclusive cast started and ended with casting the talented Ramirez. In any series, a lack of body diversity is disappointing, but in a show with fashion at its core, it especially stings. Plus bodies have long been underrepresented and ridiculed in the fashion sphere, and body positive activists have made a point to claim their space.

It would be inaccurate (and shady as hell) to keep pretending there are no fat people in NYC’s fashion scene.

“I’d really like to see more visibly plus-size women, especially in the context of fashion,” says Chiwaya. “Even if we weren’t common back when the series started, we’ve made our presence felt since, and it would be inaccurate (and shady as hell) to keep pretending there are no fat people in NYC’s fashion scene.”

With episodes three and four newly live on HBO Max, it seems viewers hoping for body diversity will continue to be disappointed. Whoever calls the shots in the And Just Like That writing room is clearly hoping viewers will see tokenized acts of inclusive casting as a genuine effort to create change—but a stroll down any New York City street shows their inability to build a cast that’s truly reflective of the city’s wide range of fashionistas at every size.