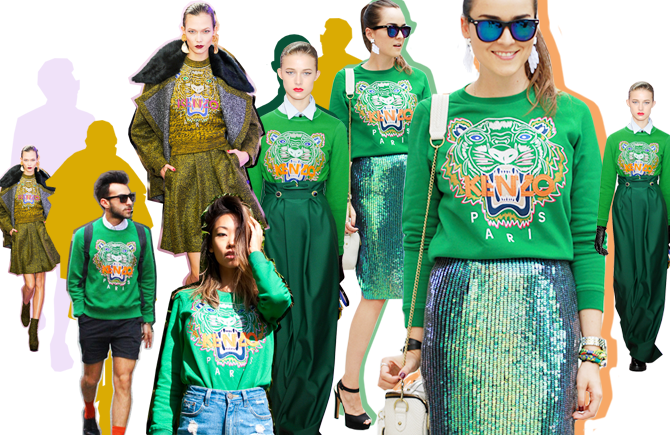 At a recent luncheon celebrating Pitti Uomo—the esteemed Florence trade show for menswear—the guests of honor were Opening Ceremony founders Humberto Leon and Carol Lim, who are slated to unveil their latest Kenzo menswear collection at the annual event in January 2013. After creating a runaway retail success with Opening Ceremony, Leon and Lim took the helm at Kenzo in 2011 and have since been widely credited in bringing new life to the Parisian label. A guest designer stint at Pitti is really just the icing on the cake—at least for their menswear collection.

Interestingly, the designers themselves weren’t what first caught our attention at the lunch: One of the label’s press representatives was wearing one of the most coveted pieces of the Fall season—a sweater with a graphic lion emblazoned on the front, along with the Kenzo label. To say that Kenzo’s tiger sweaters (one was a knit and one was a sweatshirt) were a hit is a serious understatement; During the Spring 2013 collections in New York, it seemed like every It-blogger, fashion editor, and model was wearing one, and—making the item all the more tantalizing—the sweaters were not to be found for sale anywhere.

So just how does this kind of runway retail hit happen, anyway? And when were these bad boys actually available? It turns out that Leon and Lim were just as surprised by the sweaters’ success as we were.

When Leon and Lim first started work on the women’s collection, the two were very much inspired by the interiors in Paris, and in particular, some of the showier, exotic pieces. “In the ’60s and ’70s, people would have these amazing rugs that were kind of like tiger rugs,” Leon told us. “Then as we were looking through the archives, one of the things that stood out through the ages of Kenzo is that he had these little tigers that would be on the inside of waistbands, on the inside of bags, on tiny things in watches.”

As it happens, the duo were already on the hunt for new iconography for the label, which had previously emphasized flowers as its main symbol. “Carol and I never felt like [Kenzo] owned flowers,” said Leon. “It didn’t feel believable to us—we weren’t convinced. We understood the value of an icon that a brand can hold onto … So the tiger was one of the first things we worked on. It feels right for the brand. There’s something kind of elegant and cool about it—I think it rides the perfect territory of both.”

To bring the whole inspiration full circle, the initial version of the sweater—a knit—looks like a tiger rug on the back.

How It Got Made

In addition to the knit, the duo decided that they really wanted a sweatshirt version. (Leon confessed that he mostly wanted one to wear on the runway at the close of the Fall 2013 show.) But they hit a snag.

Ultimately, Leon made the sweatshirt mostly for himself, and samples for the models. Then, of course, the stores bought it.

Leon and Lim were out of town when the sweaters hit their New York Opening Ceremony outpost, so they had no idea that they were a hit until they returned, hoping to snag one for themselves.

“Carol was thinking she’d get a sweatshirt for her husband,” Leon said. “And they were gone … We said, ‘Wait, this can’t be—we just got them in yesterday.’ But they were gone.”

The sweatshirts sold out at Opening Ceremony in just two days. According to Leon, the duo had made 2,000 pieces, thinking they’d be on the racks even up through the holiday season, so folks could buy them as gifts.

“We got it into our Paris stores [in October], and it sold out within three hours,” he said, “Three hours just through Facebook, and they’re all gone.”

Since the sweaters sold out, Leon and Lim have been inundated with requests—this editor among them!—for a stray sample or a sweatshirt somewhere (anywhere!) that’s still for sale. Editors claim to have combed eBay and begged for favors to get one, but according to the Opening Ceremony co-founders, there’s no inside handshake. “To this day, I have friends e-mailing me and saying, ‘I can’t get it! What’s happening?!'” laughs Leon.

“I don’t know how it became a thing,” he confessed. “It’s a really interesting thing, and it’s funny because now, the same people that were saying ‘we don’t sell sweatshirts’ are saying ‘where’s the new sweatshirt?'”