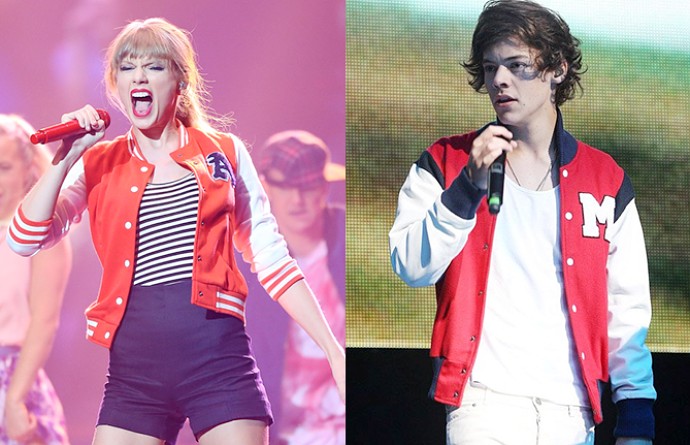 Late yesterday afternoon, news broke that songstress and serial dater Taylor Swift was headed for heartbreak again, this time at the hands of her 18-year-old British bad boy beau Harry Styles. The 23-year-old country star has made a career out of using her failed relationships for fodder in a string of hits, and we’re sure this’ll be no exception. Although their fling lasted a mere two months (which is par for the course when Swift’s men are concerned), we thought it was necessary to probe deeper into the split and chart out their brief time together to get to the bottom of it. Below, the anatomy of a breakup.

First Introduction: Swift and Styles met—where else?—at the 2012 Kids’ Choice Awards back in March. Styles’ Brit boy band One Direction took the stage and the crowd went nuts—notably Swift and her pals Selena Gomez and Ashley Tisdale. At this point Swift was single, as it was a few months prior to her summer fling with Conor Kennedy.

A Very Public Proclamation: A week after Swift and Styles had met, their mutual friend Justin Bieber blabbed in an interview that someone he knew thought Styles was hot. “I already know one of the biggest artists in the world thinks Harry is so hot, but I have been sworn to secrecy,” Biebs said. Obviously, nothing was confirmed at this point—but rumors of the duo began to surface, even though it was months before anything actually happened.

Awards Show Reunion: As Swift’s Kennedy fantasies were laid to rest after Conor returned to high school, she ran into styles at the MTV Video Music Awards in September, where both of them performed. Although they didn’t go public at this point with anything, rumors really started to swirl—especially because a track off of Swift’s album Red entitled “I Knew You Were Trouble” was allegedly about the first time she saw Styles.

Another Public Proclamation: In a Seventeen interview in October, Styles spoke highly of Swift, stating, “She’s a really lovely girl. Honestly, she couldn’t be a sweeter person. She’s a great girl and she’s extremely talented.”

Romance Confirmed: Despite speculation, no one had really confirmed that the pop star duo were making music outside of the studio—until Swift performed on “The X Factor” and host Mario Lopez spilled to his radio show. Lopez stated, “Taylor Swift was the special guest performer, and a little inside scoop for you: During rehearsals, Harry from One Direction came and slapped me on the back and said, ‘Hey, Mario, how ya doing?’ And I said, ‘What are you doing here?’ And he sort of [pointed] toward Taylor.” Game on.

Winter Fling: Dubbed “Haylor” by the oh-so-clever media, the two were joined at the hip in New York in early December, where they were spotted heading to her hotel room at the end of two party-filled nights at hotspots including the Crosby Hotel. They also made a much publicized stop at the Central Park Zoo, where they did a lot of gazing into each other’s eyes. Following their Big Apple jaunt, Swift flew Styles back to London on her private plane.

Paradise Turns Into Disaster: Swift made headlines again when she took Styles to get a Shamrock Tattoo in Los Angeles, prompting hilarious comments from sites like Gawker such as “Cool Mom Taylor Swift Took Her 18-Year-Old Boyfriend to Get a Giant Tattoo Yesterday.” It seemed like everything was just peachy heading into the holiday season, and they even shared a public kiss on New Year’s Eve after Swift performed in Times Square.

The duo then head to the Caribbean, as all young multi-millionaires who move too fast in their relationships do, where they posed with fans, lounged on the beach, and eventually got into a huge fight that led to their split. No one can confirm what the fight was about, but since reports broke, both parties have been seen sulking following their island departure. A few days ago, Swift hinted at the split, tweeting the below:

In case you’re unfamiliar with Swift’s musical stylings, this is a lyric from “I Knew You Were Trouble,” the song allegedly about Styles. Obviously, this implies that he was responsible for their relationship’s demise. But what can we deduce from the quick breakup? Either that Swift pushed him too far, as she has with other men in her past. Or that the whole coupling was manufactured for some quick hits of publicity. Either way, we’re sure we’ll get some great songs out of it.