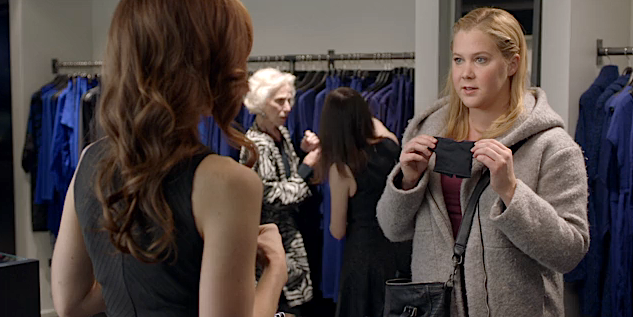 “Inside Amy Schumer” proves it cannot, will not quit with its latest searing sketch, skewering fashion’s obsession with thinness and size zero. We see Amy go shopping for a size 12, where’s she’s asked by an annoyingly upbeat salesgirl to “not to scare the thinner customers.” She’s then led to the double-digit section, which is—quite literally—a pasture. (As in, we can only assume, being put out to one.)

There she finds nothing but sunshine, a cow, and—surprise!— Lena Dunham who’s been trapped there for three months after asking for a turtleneck. Oh, and there’s a tarp, a blue tarp. It’s not only perfect to cover herself with, but it’s also sold with a mall pretzel and dipping sauce. Which is not the worst deal.

A fixation on the physical is a common theme in Schumer’s self-parodying work, and she’s made mocking society’s obsession with size, age, and sex appeal a (hilarious) art form. Last month, after Glamour called her a plus-size inspiration, she wrote on Instagram that she’s actually a size 6 or 8, making her size-12 sketch an obvious clapback.

Watch the biting video below