Jennifer Lawrence and Amy Schumer are #BFFGoals. They’ve written a movie together, ridden a jet ski together, and thirsted over the Hemsworth brothers at the Golden Globes together. But even they have their issues with one another, namely, Lawrence’s tendency to plan hangouts and cancel them minutes later.

In an interview on “The Ellen DeGeneres Show,” Schumer was asked about the last text that she received from Lawrence. Like the no-holds-barred comedian she is, she didn’t hesitate to jokingly throw Lawrence under the bus for texting her to go to dinner and backing out before Schumer even saw the text and had a chance to respond. “She said, ‘Do you want to get dinner tonight? Where are you right now? Never mind. I can’t get dinner. I have other plans.’ Before I even sent her one text message,” Schumer said.

MORE: 15 Outrageous Jennifer Lawrence Quotes Sure to Make You Blush

Naturally, after Schumer’s roast, fans wanted to see the text in question. Soon after her appearance on “Ellen,” the “I Feel Pretty” star shared a screenshot of her text with Lawrence, whom she affectionately named “Jlaw” on her phone. The text begins with Lawrence asking Schumer and her husband, Chris Fischer, to dinner.

Before Schumer had a chance to respond, Lawrence revoked her offer, to which Schumer responded, “Good talk.” “@theellenshow asked about my last text with Jennifer Lawrence,” Schumer captioned the screenshot. 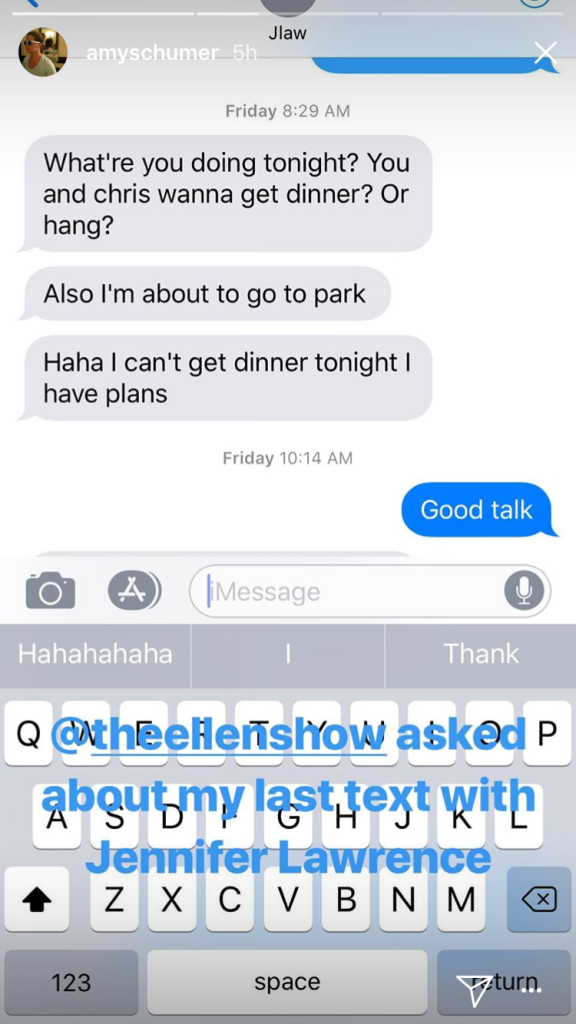 MORE: The 10 Funniest Pranks Celebrities Have Pulled on Each Other

Lawrence and Schumer might be two of the biggest names in Hollywood, but that doesn’t stop them from encountering the same irritating issues that many friends face: flakiness. Good to know that even A-list friendships have trouble planning hangouts.