Since their trial started, there have been questions about if Amber Heard could go to jail for Johnny Depp’s verdict in their defamation case and the chances she could be charged with perjury now that the trial is over.

Depp and Heard were married from 2015 to 2016. Heard filed for divorce in May 2016 after 15 months of marriage. In her divorce filing, she also obtained a temporary restraining order against Depp, claiming that he abused her while under the influence of drugs and alcohol. Depp denied the accusations, and a $7 million settlement was reached out of court in August 2016. Heard pledged to donate the money to the ACLU and the Children’s Hospital of Los Angeles. “Our relationship was intensely passionate and at times volatile, but always bound by love. Neither party has made false accusations for financial gain. There was never any intent of physical or emotional harm,” the two aid in a joint statement at the time.

In 2018, Heard wrote an op-ed in The Washington Post about her experience with domestic abuse. While she didn’t mention Depp by name, many believed that the post was about her ex-husband. Depp sued Heard for $50 million for defamation in 2019, claiming that the op-ed cost him acting jobs, including his roles in Walt Disney Pictures’ Pirates of the Caribbean franchise and Warner Bros. Pictures’ Fantastic Beasts series. Heard, for her part, countersued Depp for $100 million.

So…could Amber Heard go to jail after Johnny Depp’s verdict? Read on for what lawyers have said about the chances Amber Heard could go to jail and be charged with perjury after Depp’s win in their defamation case. 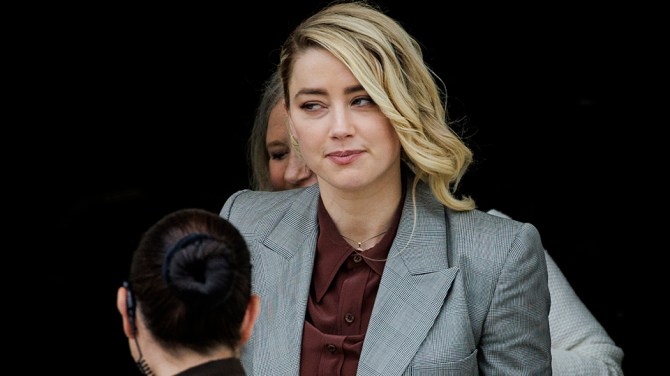 Is Amber Heard going to jail after Johnny Depp’s verdict?

Is Amber Heard going to jail after Johnny Depp’s verdict? No, Heard is not going to jail after she was found liable of defaming Depp. Depp’s defamation lawsuit against Heard is a civil case, not a criminal case, which means that she won’t go to jail for her guilty verdict. “You don’t go to jail as a result of a civil finding,” attorney George Freeman of the Media Law Resource Center told Fox News in May 2022. Heard could, however, go to jail if she’s accused and convicted of perjury, the offense of willfully lying in court under oath. “The only way what happened so far in Virginia could lead to jail is if she’s accused and convicted of perjury, which there has been no official accusation of and which seems quite remote,” he said. Freeman, who specializes in cases around the First Amendment, told Fox News that he’s never seen a person charged with perjury in a civil case in his four decades in law.

Civil and criminal attorney Tim Parlatore also told Fox News that he doubts Heard will be charged with perjury. He told the publication that, in order for her to be charged with perjury, the prosecution would have to prove beyond a reasonable doubt that Heard “intentionally said something that wasn’t true and knew that it wasn’t true,” which is difficult to prove. Civil attorney Broderick Dunn—who practices law in Virginia, where Heard and Depp’s trial was held—also told Fox News about why perjury charges often aren’t pursued in abuse cases. “There are a lot of perjury cases that could be brought that aren’t to prevent a chilling effect on people with domestic violence claims,” he said, explaining that perjury charges could prevent from victims from coming forward with their allegations in fear their claims could result in prison sentences.

Parlatore also told the publication that Heard and Depp’s backgrounds as actors could also prevent law enforcement from pursuing perjury charges against Heard. “All of the normal ability to judge a witness’s demeanor and truthfulness goes out the window when you have professional actors on the stand,” he said. If Heard is convicted of perjury, however, the conviction has a maximum 10-year prison sentence under Virginia state law.

Sean Caulfield, a partner at the law firm Hodge, Jones and Allen, also told The Daily Mail in May 2022 that Heard could also be charged with perjury for her admission during the trial that she had not yet honored her pledge to donate the $7 million from her divorce settlement with Depp in 2016 to the Children’s Hospital Los Angeles and the American Civil Liberties Union, despite swearing under oath that she had, including in the United Kingdom High Court of Justice for Depp’s defamation case against The Sun in 2020. Caulfield told The Daily Mail that Heard could be charged with perjury in the U.K. because misleading a “cuts to the core of our justice system.” “Yes, I think so,” Caulfield said if it’s possible police could investigate Heard for perjury. “While it may not be a central issue to the case [the donations], perjury is the single biggest threat and cuts to the core of our justice system, so the police may be invited to investigate to show that any member of the public who lies to the court can be prosecuted for perjury.”

He continued, It is not a central issue before the court, but if Depp’s legal team are trying to paint a picture [that she is trying to keep the money], then it is. And it is always central that people do not perjure themselves. CPS guidance says you will need to know what you said was false, which can be hard, but it should not be that difficult to know whether she had made the donations or not. I can’t see a problem there. The other confusion is that she would need to be extradited. If the CPS authorises a charge, you then have to extradite her which is unlikely, especially as she is a US resident.”

Legal expert Mark Stephens, however, told The Daily Mail about how difficult it is to prosecute a perjury case. “It is notoriously difficult to bring and prosecute a perjury case. You have to show that someone deliberately told an untruth as opposed to them being confused or misremembering,” he said. “I think it would be a very difficult thing to do. Police could investigate it, but they probably would not prosecute it. The case is not about what she spent her money on, but what took place during their relationship. I accept misleading a court is a big issue, but this is a line that Depp’s team ran in London. How do you prove that she knew? She may have been given advice that the donations were made.”

He continued, “Access to bank accounts if you are a celebrity may be managed. You may well believe that you made or have committed to the donations. Nobody comes out of this case well. Depp’s legal team are just a different class. They know the evidence is there, they are not getting names wrong, misplacing things – it is a smooth, swift operation. Heard’s lawyers looks like they are being outgunned.”

Steven Heffer, Head of Privacy at the law firm Collyer Bristow, explained that a perjury conviction in the U.K. is punishable up to seven years. “Perjury is a very serious offence under English law as it strikes at the very heart of the justice system. Well known individuals including prominent politicians have found this to their cost and ended up serving prison time,” he said. “Under English law Perjury is committed in a judicial proceeding when a witness makes a statement material to that proceeding which he knows to be false or does not believe to be true – and it carries a prison sentence of up to 7 years If one of the witnesses had been proved to have lied in the course of the English libel case, they could expect a prosecution for perverting the course of justice and perjury and a likely custodial sentence.”