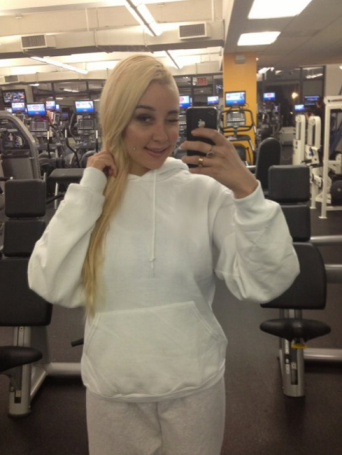 The world just isn’t ready to stop paying attention to Amanda Bynes. After months of erratic behavior, including insane social media activity and getting arrested in sweatpants, a filthy wig, and a $3,600 Cartier Love bracelet, the 27-year-old former actress is still at it. One of her trademark activities recently has been launching attacks on various celebrities through Twitter, proclaiming that they’re ugly. Everyone from Rihanna to RuPaul have been victims, and the latest is making a lot of people pissed off: Barack and Michelle Obama.

Clearly, the girl has issues or is simply utilizing Twitter as a way of drumming up publicity—which has worked: She now has over 2.7 million followers, a considerable number that’s comparable to many A-listers. But we can’t get over her odd obsession with physical appearance. She has noted multiple times that she is in the process of multiple nose jobs, which will correct the “webbing” between her eyes. (Side note: A brief Google search reveals that no one knows what the hell a “webbing” in between someone’s eyes is.) She also regularly posts pictures of scales, noting that her weight is plummeting—and she couldn’t be happier.

We can’t answer whether or not this obsession with looks is a result of the pressures she faced while being in the spotlight when she was younger, or if she really doesn’t know what she’s talking about. Regardless, we’ve rounded up a guide to people who she deems ugly—so read on and let us know which attack was most shocking to you!

Barack and Michelle Obama
Many feel that Bynes has officially gone too far, tweeting the following today, “Barack Obama and Michelle Obama are ugly!” Things have surely come a long way for Bynes who begged for the POTUS’ help about a year ago. Following a drunk driving arrest, she tweeted, “Hey @BarackObama… I don’t drink. Please fire the cop who arrested me. I also don’t hit and run. The end.”

Drake
Bynes has a clear obsession with rapper Drake, famously tweeting back in March that she wanted him to perform a lewd act on her. Since then, something has soured between the two, as she regularly tweets things like, “I like dating ugly guys because they make me look more gorgeous when I stand by their side don’t worry ug face @drake girls love ur fug face,” and “I’ll post ugly pics of @Drake every time I see one! Not hard ;)” We’re unclear as to how she actually feels, and Drake has yet to respond to the matter.

Jenny McCarthy
In early May, when Bynes’ craziness was truly exploding all over Twitter, a report claimed that police were at her house to arrest her. Jenny McCarthy weighed in (for whatever reason), and quickly received an attack from Bynes. “@JennyMcCarthy you’re ugly! Police weren’t at my house old lady! Shut the f*ck up!” she tweeted, also acknowledging her strange obsession with age.

Chrissy Teigen
As a very accomplished swimsuit model, it’s clear that Chrissy Teigen is beautiful. However, after Teigen stated that she was concerned about Bynes’ mental health, Bynes fired back. “Chrissy Teigen, you’re not a pretty model compared to me,” she wrote. “I signed to Ford models at age 13. I don’t looks up to you beauty wise. I’m far prettier than you! I’m offended that you’re saying I have a mental illness when I show no sign of it. But thankfully not one man that wants me wants you and you are an old ugly model compared to me!”

RuPaul
Bynes has admitted a strained relationship with her parents, so she naturally decided to call her father ugly—and compare him to legendary drag queen RuPaul. “My dad is as ugly as RuPaul! So thankful I look nothing like you both! I had nose surgery after my mug shots so my nose and I are gorgeous!”

Jason Biggs
Yes, Jason Biggs of “American Pie” fame is back in the news. About a month ago, Bynes inexplicably attacked him on Twitter, stating, “You’re so ugly I won’t talk to you.” Um, was he trying to talk to her? We’ll never really know.

Miley Cyrus
After shaving her head, Bynes was thrilled and retweeted comments from fans that she resembled Miley Cyrus. However, last month she took a turn and tweeted a photo of Cyrus clad in a Balmain jumpsuit and wrote “ur ugly @mileycyrus” Later that night, she tweeted that Cyrus was beautiful and she couldn’t wait to have a nose like her after her surgeries. Again, what?!

Jay-Z
The rapper and hubby to Beyoncé was one of the original few to get attacked by Bynes on Twitter, who posted a picture of him back in February with the caption, “Ugly face.”

Rihanna
Bynes wrote a variety of offensive tweeted directed at RiRi back in May, including, “@rihanna you look so ugly tryin to be white,” then she added that the singer actually deserved the 2009 beating she endured at the hands of then-boyfriend Chris Brown because she wasn’t pretty enough. She didn’t stop there, and tweeted absurd things about almost naming her new dog Rihanna. Never one to sit back and take it, RiRi responded with, “Ya see what happens when they cancel Intervention?” Burn!