It was a late October night in New York City, and Allegra Acosta was traveling to her hotel. Hungry and jet-lagged, Acosta planned on eating before immediately heading to bed. She had an early day of interviews and photoshoots, and in the evening, she would attend her first-ever Comic Con, where she and her five castmates would present their highly anticipated new Marvel show, “Runaways.”

When her car pulled up to the hotel, Acosta’s plans seemed to go awry after noticing a swarm of people outside. “I was like, ‘Ugh. It’s going to be a party hotel. I’m not going to be able to sleep tonight,’” says Acosta. The car rolled to a stop and Acosta and her family exited with their luggage. Then, she heard the screams. “They were like, ‘Molly!’” Acosta says. “I was like, ‘What?! Hi, guys! Oh, let me sign!’”

The crowd wasn’t heading to some balls-to-the-wall rager. They were waiting for her—or, specifically, Molly Hernandez, the bubbly super strength-powered teen Acosta plays on “Runaways,” premiering November 21 on Hulu. “It was my first experience with people giving me that sort of attention,” she says. “I’m so appreciative to those people who stayed outside the hotel.”

The series, which follows six super-powered high schoolers who band together against their villainous parents, is Acosta’s first major on-screen role. And though she’s only 14, Acosta isn’t shy about the variety of obstacles, from petty bullies to racial typecasting, that she’s overcome to reach hero status. “My parents always taught me that no one is going to give me anything if I don’t work hard for it,” Acosta says. “Nothing is going to get handed to me.” 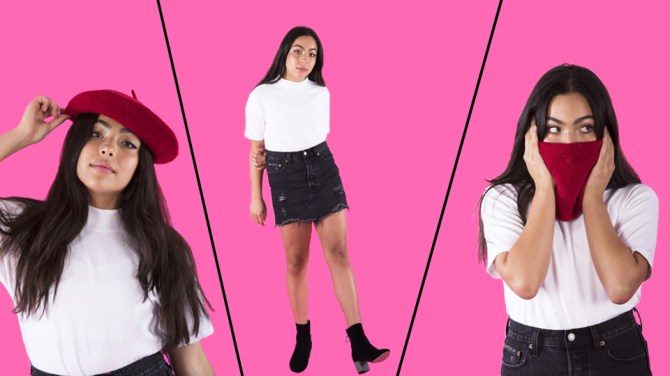 Born in a tightknit Mexican community in El Paso, Texas, Acosta, the eldest daughter of two immigrants from Chihuahua, Mexico, fell in love with acting at age 4 after watching a DVD of “Annie.” Infatuated by the character’s über-positive personality and big curly hair (similar to her own), Acosta remembers bringing her family into the living room, locking the doors, and performing a one-woman-show-version of the musical. “Once they clapped for me, it just made me feel so special,” Acosta says. “That’s when I realized, ‘I’m doing this for the rest of my life.’”

At 8, Acosta came across a showcase in Los Angeles where aspiring actors could audition for spots with high-powered talent agencies. After begging her parents to go, Acosta and her family flew to L.A., where she performed Lady Gaga’s “Born This Way” and monologues for various agencies. At the end of the day, a woman, who later became her manager, came up to Acosta. “She told me, ‘When you’re ready to move out to L.A., give me a call,’” she says.

Understanding how a move would change her family dynamic forever, Acosta made her case and put the decision in her parents’ hands. “I was like, ‘Mom, you know I really, really love this, and Dad, you know I really, really love this. I want to do this for the rest of my life. But it’s completely up to you,’” Acosta says. “Six months later, my parents literally sacrificed everything.”

Though Acosta’s family was behind her, not everyone felt the same. During her childhood and particularly the six months before the move, Acosta remembers being ridiculed for her dreams. “Knowing what you want in this really small town, you get a lot of kids who hate on it,” Acosta says. “I remember I told my third grade teacher, ‘Hey, I’m going to L.A. to a showcase.’ And she was like, ‘Don’t get your hopes up, sweetie.’ It’s unheard of, like, ‘You’ll never be a star. You’ll never go to L.A.’ I love proving people wrong.” 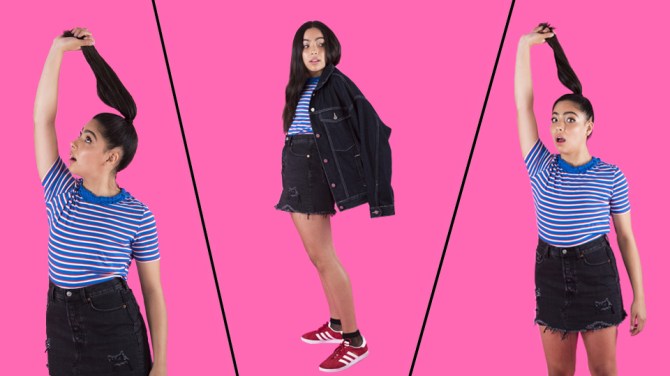 However, Acosta’s hurdles didn’t end there. When she moved to L.A. and began auditioning, she remembers seeing parts time and again for “sassy, fiery Latinas,” who, more often than not, were simply labeled as “Latina girl.” Even growing up, Acosta struggled to identify with primarily white Disney princesses or stereotypical depictions of her race on-screen. “We were always a stereotype,” Acosta says. “There were only a few movies that weren’t. I remember talking to my mom and being like, ‘Mom, why does it always have to be the drug dealer or why does it always have to be that curvy girl with the sass?’ We are more than just a stereotype.”

We have to be responsible and represent a bigger part of ourselves.

As a kid starting out in the industry, Acosta took any opportunity she got, regardless of the racial implications. However, now that she’s older, Acosta is hyper-vigilant about the projects she chooses to be a part of. She recalls an audition last year when she was uncomfortable with a character who was described as “poor” and boasted a “stereotypical Latina name.”

“I’m not saying that there isn’t poverty where I’m from or in Mexico. What I’m saying is that they made my race seem like we didn’t work hard and we were always on the side of the street. I didn’t like that,” Acosta says. “We have to be responsible and represent a bigger part of ourselves. I was turned off by it and I told my mom, ‘I’ll go for the practice, but I didn’t feel quite good about it.’” 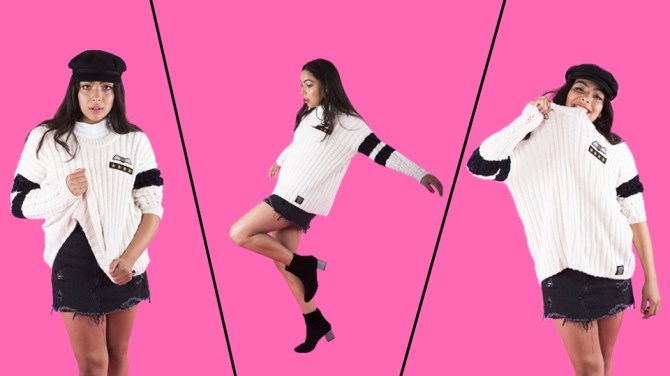 After moving to L.A., Acosta’s career sailed smoothly. She nabbed small parts in children’s shows on Amazon and Nickelodeon, and, after a failed audition for “America’s Got Talent,” she started a YouTube channel where she posted music covers and Q&As. Still, she wanted more.

On New Year’s 2016, at 13 years old, Acosta and her family sat down to write their annual New Year’s resolutions. Acosta’s list included the usual shoot-for-the-stars goals: a movie, a TV Show, and, at the very bottom, “maybe a superhero.” In a fortuitous twist of fate, Acosta’s first audition that year was for “Runaways,” a television adaptation of the cult-favorite Marvel superhero comics of the same name. “I’m not kidding,” Acosta says. “Every time I look back, I’m like, ‘My god. Something went right when I wrote that.’”

My character is the first Latina superhero ever in film.

In typical Marvel secrecy, Acosta didn’t know what she was going out for at first—the series was simply dubbed “Untitled Hulu Project”—so she was able to walk in “chill” and “calm.” The stakes were raised when she was offered a second audition and learned that she would be playing Molly, the youngest of a ragtag group of crime-fighting teens.

After her final audition, Acosta put the part out of her mind to fly to Texas for her uncle’s wedding. Then, on a car ride to her hotel after the wedding, Acosta’s mom received a call. “My mom gets a call from my manager and stops the car,” Acosta says. “We booked it. We were all crying, jumping around, banging the ceiling. We were so excited.” 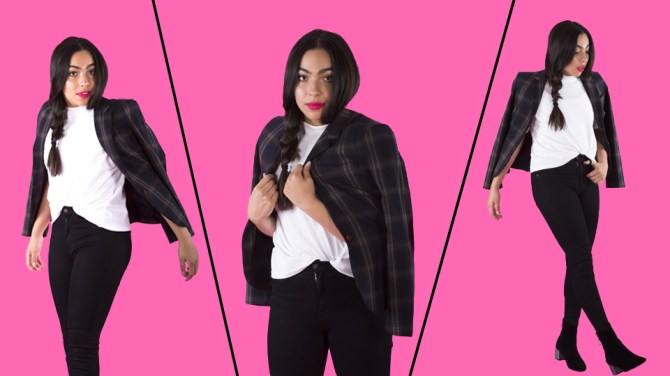 The good news continued when Acosta learned that her character, originally white with red hair and green eyes, would be rewritten as Latina, with her last name changed from “Hayes” to “Hernandez.” “I was like, ‘Ahh! She’s a strong female and she’s Latina!’” Acosta says. “They changed it to a Latina character which is amazing! This is the first Latina superhero ever in film. I can’t believe that. I’ve never seen that before.”

Though the show isn’t explicitly political, Acosta sees “Runaways” as a response to Donald Trump’s presidency. For Acosta, the show’s six lead teens—which primarily consist of women and minorities—symbolize the power that her generation, Generation Z, has in effecting change. And though not confirmed, she also likes to believe that her character’s signature pink cat-eared beanie is a nod to the 2017 Women’s March’s pussy hats.

“What’s really important about our show is that we showcase different ethnicities and it’s female-centric,” Acosta says. “We have a show that might not appeal to [Trump’s] audience, but will appeal internationally. The reason that our generation, Generation Z, will be the change is because we don’t necessarily just want to make an impact, we want to make a change.” 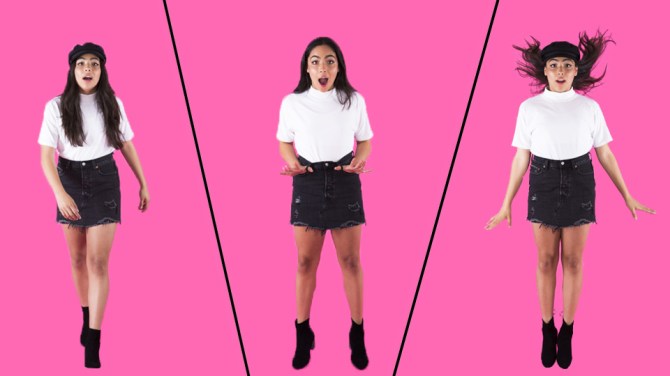 At 14, Acosta is aware that there are preconceived notions about her generation, which is why, from the minute she began acting, she knew she wanted to use her platform for change. Audiences may soon see her pushing cars and saving lives on-screen, but off-screen, Acosta is just as heroic.

“Superheroes in movies are really strong, but they also fight. They protest against things that are bad. We’re fighting in the same way,” Acosta says. “Even though we don’t have a hero right now, our show showcases that we can be our own superheroes. We can be the bigger power.”