Alexis Floyd was working front desk at a yoga studio when she booked her first series regular role in Inventing Anna. “I can’t say it didn’t feel a little good to walk away,” Floyd tells StyleCaster.

Inventing Anna, Netflix’s true-crime miniseries created by Shonda Rhimes, is based on a 2018 New York magazine article about Anna Sorokin, a woman who masqueraded as a German heiress to defraud banks, hotels and her high-profile friends under the name Anna Delvey. Floyd plays Neffatari “Neff” Davis, a concierge at 11 Howard, an upscale hotel in New York City’s Financial District, who befriends Anna after she checks in as a guest and tips her a $100 bill. “I wish,” Floyd laughs when asked if she’s ever been tipped in $100s. “Maybe a buck for renting a mat.”

Floyd made her television debut The Bold Type, in which she played the love interest of an editor at a women’s magazine, but it had been a while since her arc ended, so she found a job as a receptionist at a yoga studio in SoHo, just a couple miles away from where Neff worked at 11 Howard. “It was totally kismet that I ended up playing Neff because I know how that is,” she says. “The ‘hi ma’am, yes ma’am, no ma’am.’ Secretly texting your landlord because rent is late under the counter but you can’t let it show.”

In my life right now, I want unshakable worth.

Floyd had been at the job for a while before she came across the audition for Inventing Anna. She hadn’t heard of Anna Delvey before, but as soon as she put her name into Google, she became obsessed with the story.  “As soon as you typed in ‘Anna,’ you got: ‘Anna Delvey. Soroki. 11 Howard. Is she Russian?’ My computer was flooded,” Floyd says. She submitted a self-tape. Later, while she was sitting in the audience during an intermission of a play, Floyd noticed that she had a missed call from her managers. She called them back and learned that she booked the role of Neff. “It was this surreal moment of being in this beautiful theater in New York, where the show happens, and I’m in the velvet chair getting ready for act two,” she says.

After accepting the role, Floyd immediately direct-messaged the real Neff on Instagram and asked if they could meet. Floyd, who learned that she lived a 20-minute walk from Neff in Brooklyn, met her in the middle between their apartments for what became a three-and-a-half-hour talk about her life story.

“We both worked front-desk jobs. We’re both struggling to keep the balls in the air of tending the flame of your art but also keeping food on the table,” Floyd says. “There were a lot of stars aligning between the two of us.” Floyd also learned more about Neff’s relationship with Anna. “The biggest clue that I got from meeting with Neff in person was into the intimacy of her friendship with Anna, into the real connection they had. They were really friends, and at certain points, almost like sisters,” she says.

One of Neff’s most memorable lines from Inventing Anna is in the premiere when she tells Vivian, a reporter for Manhattan magazine who’s trying to interview Anna, that everyone wants something: money, power, image or love. When asked what she wants, Floyd didn’t hesitate with her answer. “In my life right now, I want unshakable worth and health for all of my loved ones,” she says.

Ahead, Floyd talked to StyleCaster about what she thinks Neff’s reaction to Inventing Anna will be, the Shondaland show she’d want a crossover episode with and the moment with Shonda Rhimes that felt like a “root in the ground.” 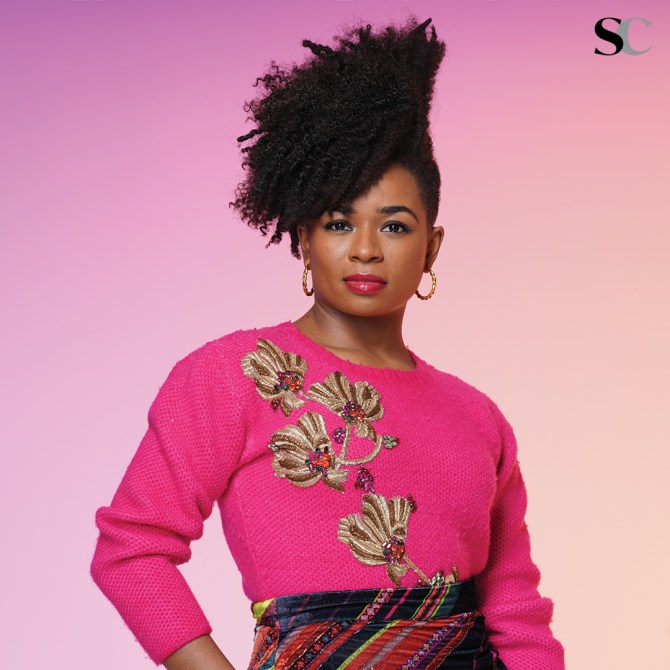 On how she thinks Neff will react to Inventing Anna

“I’m excited for Neff to see the show. One thing I know for sure is she’s going to love the looks. Neff is popping. The most important thing was to honor that she’s a real person and her vulnerability and dimensionality and to find the motivation in her actions. The story was fantastical. Sometimes it feels like a ghost story. Shonda was really clear from the beginning that we weren’t doing imitations. We were taking the bits of the story and bringing them to life. I didn’t feel pressured about doing a carbon copy of Neff, especially because the writing took so much poetic license and nuance to bring the humanity of these people through. I just wanted to make sure her heart came through.”

On why Neff was so loyal to Anna

“After speaking to Neff, she was 100 percent sure Anna was who she said she was. Neff’s doubt might creep in from other influences in the moment, but she is always quick to shut it down. That inner strength of trusting her relationship with Anna carried me through, and it makes it all the more heartbreaking when she finds out that Anna may not have been fully honest about where she comes from. In the end, she still thinks their friendship was real, and I think Neff would say that today.”

On if she’d be able to stay friends with Anna

“If I were in Neff’s shoes, one thing I trust is that I’d also have her sense of self. I’d have her poise. Her confidence. Her assuredness. If I’d have the emotional tools that the real Neff has. I would be able to come back as strongly as she has because she clearly has always held fast in who she was. Her power does come from within. She is her own source of bravery. That’ll never fail you.” 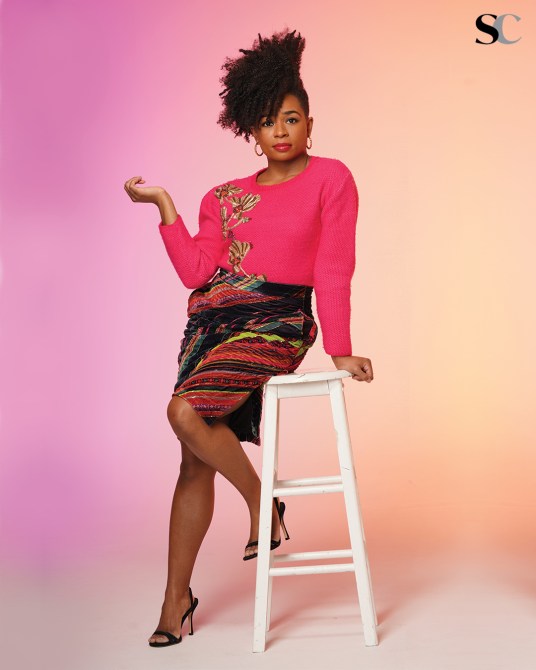 On the first time she met Shonda Rhimes

“The first time we digitally met was at a Zoom meeting. But the first time I met her in person was in Los Angeles for our first table read. She was in her element. She really leads as a writer, especially in that room. She’s art first. Right after that, she’s people first. We finished the table read. She waved me over, and we had a real one-on-one. She said to me, ‘I had three gut feeling moments about actors before in my life that I thought were going to turn into something big.’ It was Katie Lowes, Sandra Oh and myself. That was such a moment of exponential sunshine that stayed with me. It really felt like a root went into the ground, and I could be in this space with this cast that’s just e​​xtraordinary times extraordinary. She really said to me, ‘You’re home.’”

I learned young that I was swimming upstream just to be socially acceptable.

“A major theme in the show is what we look like seems to be a currency in this society. It was important we see in each character, including Neff, what it is they feel they carry, as much as bring into a room. You bring a sense of confidence. You bring a sense of knowing who you are, if you’re Neff, but you’re carrying a difficult assumption placed on you based on the body you were born in that you have no choice to be born in. Even though what Neff was saying in that moment was there’s a struggle you have never experienced before, what Anna can relate to is that she also felt like she was walking into rooms being treated like a child. She felt like she was walking into rooms and they were assuming her gender and assuming that that made her less credible or capable. The show is asking a lot of questions about the assumption we make and how that devalues or increases value before we even hear a word come out of someone’s mouth.”

“The first time was as early as middle school. I was the only Black girl in a predominantly white environment. There was a lot of roleplaying that happens. There’s a lot of code switching. I learned young that I was swimming upstream just to be socially acceptable in an environment of friends. It’s wild how young we are when we start learning those lessons. Something I’m trying to work on now is feeling enough to bring my exact self into a space and letting that opportunity for people to come to me and not feel like I’m racing to catch up to an idea of who I think people want me to be.” 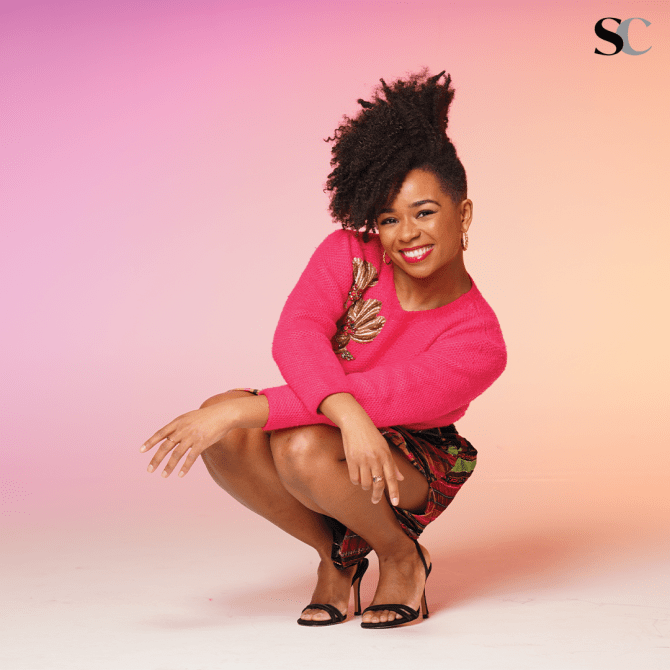 On her hair journey

“When I was first entering the industry, there was resistance to not having a relaxed haircut. It was less versatile. I heard it being called less professional. I heard my hair called more street. I’ve encountered a lot of aggressive hair spray to the curls. It’s not to blame anyone. In some environments back in those times, the training just wasn’t there. When you’re hiring for a larger group of actors, you’re probably going to hire one stylist to do an amalgamation of hair. My texture just wasn’t in their repertoire. It’s a systemic problem so much more than it’s a single artist’s problem. I think we’re on our way. It feels like we’re just getting started in terms of experimenting with the identity of Black people in the industry. What it means to feel beautiful. What it means to feel powerful. But not only what it means, but the diversity of the definitions of these things.”

We’re just getting started in terms of experimenting with the identity of Black people in the industry.

On a possible second season of Inventing Anna

“I haven’t heard whispers about a second season. All I’ll say is that it’s up to Anna what’s next for her, and we all have our ear to the ground. I’m one of those people, and I’m sure Shonda is too.

On the other Shondaland show she’d be on

“I would love to be the coat hanger for Olivia Pope. My god, the coats! Just follow Kerry Washington everywhere she goes. What I love is Shonda has a language with her camera angles. You see crossover, especially with Scandal and Inventing Anna. There’s the harsh zooming in, the pulling focus and this sense of surveillance she conveys in both of those shows. I definitely feel some Scandal energy in Inventing Anna. A crossover episode? I don’t know.”

Inventing Anna is available to stream on Netflix.