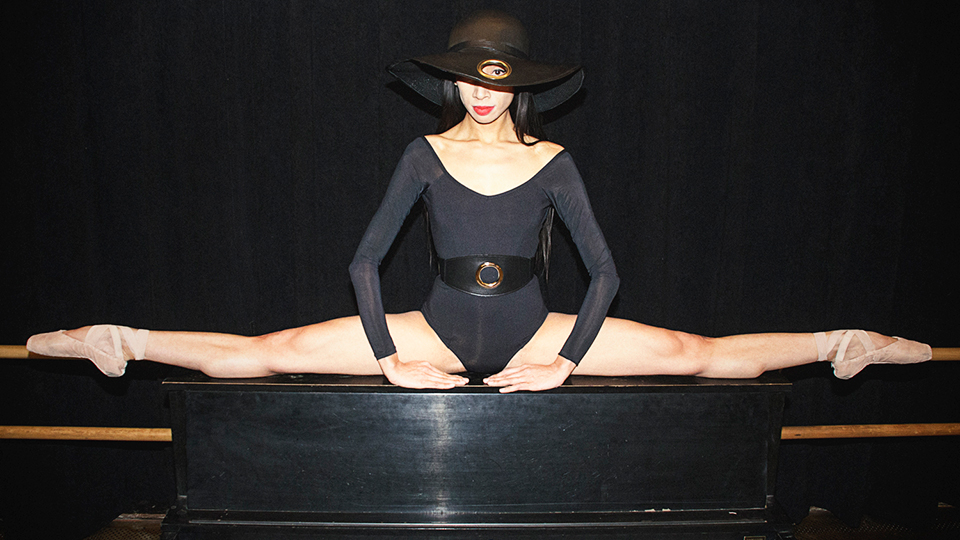 The traditional aesthetics of ballet are about as well-defined as it gets: pink tutus, leotards, pointe shoes, polished buns. As beautiful as it is, the art form isn’t exactly known for its edge.

Which is why I was so pleasantly surprised when I first stumbled across the Instagram feed of dancer Alex Jacob, an alumni of the Dance Theatre of Harlem who favors slick latex catsuits, thrifted ’60s minidresses, corseted pieces, and stacks of leather and lace in the images she posts en pointe in Fort Greene Park or in a grand plié on a Tribeca bridge. Most recently, Jacob starred in the Spring 2016 campaign for Zana Bayne, fashion’s reigning queen of leather and the designer behind the harnesses worn by Beyoncé’s backup dancers’ at the recent Super Bowl.

The photos are strikingly subversive, despite their simplicity. In some, they show Jacob at the ballet barre wearing a leather chain link dress atop her standard black leotard; in others, she has leather bootstraps laced up her calf and over her pointe shoes. And while they’ve been a hit with the fashion fans that follow her, she admits they have lost her quite a few from the traditional ballet world.

She’s hardly shaken up over it, though—since going freelance in 2014 after a decade with her company, the 33-year-old has set about crafting an image that’s true to herself and her style, both online and off, and she’s well aware this will ruffle some feathers among her more conservative peers. It’s not that she didn’t enjoy the daily routine of rehearsing and performing with a core of dancers with whom she had to blend in, but eventually, the sense of wardrobe whiplash propelled her to explore new territory.

“When I was with my company, I definitely played the part of whatever they wanted me to look like,” she says over tea at a Manhattan café. “I liked it—it was my language. I was brought up with strict Vaganova technical Russian training background, so I had my roots there, and I figured if I just stick to the technical foundation, then I could branch off.”

“I just knew that at work was my uniform, and then at home I was me,” she adds. “But after ten years, it was also like playing Jekyll and Hyde.”

When I meet her, she’s dressed in a buttercup yellow lace dress (a $5 vintage score, she tells me) and a frilly clown collar (yes, really) layered under a thick black Zana Bayne choker affixed with a heavy metal ring. Her waist-length hair is worn in a braid, and she’s thrown on both a shearling coat and a leather jacket (one & Other Stories, the other vintage). If you saw her on the street, you’d just as soon think she played in a rock band.

This, it turns out, isn’t a coincidence. “I feel like there’s a big correlation between fashion and music for me,” she explains. “I grew up in a very musical household—my dad plays in a punk band for fun, all my siblings play instruments, and my mom sings. Over the years, I would get obsessed with a different subgenre of rock that my dad would introduce me to, and I would look up the musicians on albums and be like, ‘Oh, they’re dressed really cool. I kind of want to look like that.'” As a grade schooler in Berkeley, she adored Black Sabbath and Led Zeppelin, then frequented a punk shows at a nearby club as a preteen—remnants of which still seep through in her style. Later in high school, her uncles turned her on to New Wave and post-punk bands like Joy Division and Siouxsie and the Banshees, and her goth phase soon ensued.

Today, she still wears her favorite band shirts—Bauhaus, New Order, T. Rex, Dum Dum Girls, The Jesus and Mary Chain—in ballet class with her leggings and leotards. “I use it for inspiration,” she say. “Especially right now, I’m kind of injured—I have a dislocated hip and an ankle sprain, so if I just look in the mirror and I get reminded of my favorite band, it usually helps my mood.”

While most of her work right now is on photo shoots and independent dance gigs (often with other creatives she meets on Instagram), she still tries to go to class every day to keep up her technique. There, she says, she looks like “a badass tattoo fairy”, with six tattoos and a septum piercing paired with head-to-toe pink and pastel. Finally, she’s been able to ditch the heavy-duty makeup—formulated for burn victims—she had to wear for years to cover up the tattoo of a bird on her wrist.

She also now generally gets to style herself on photo shoots—whether in a full-length silver catsuit she’s scored from eBay or a latex one-piece she’s made her husband go buy at a local sex shop (despite her predilection for bondage-y accessories, she confesses she’s actually “the most vanilla person” and is usually too embarrassed to go in herself).

As it turns out, being the lone alt ballerina in the world has its perks.